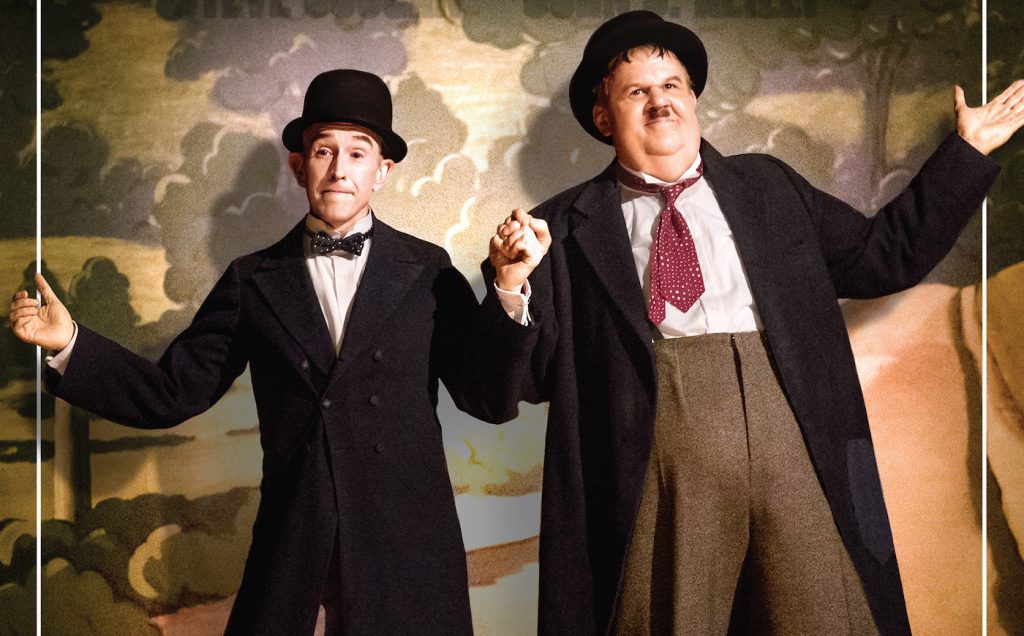 When he was a kid growing up in Scotland, filmmaker Jon. S. Baird loved Laurel and Hardy movies so much that he impersonated Stan Laurel at his school’s “fancy dress” day alongside a classmate dressed in an Oliver Hardy outfit. Three decades later, Baird pays homage to the great song-and-dance comedy team as director of Stan & Ollie. In the movie, opening wide January 11, Steve Coogan plays the duo’s rake-thin mastermind with Golden Globe-nominated John C. Reilly as his stout partner.

Working from the script by Oscar-nominated Jeff Pope (Philomena), Baird concentrates on Laurel and Hardy’s little known UK comeback tour in 1954, long after their Hollywood heyday in the 1930s and 40s. Baird says, “It would have been easy to do a film about Oliver and Hardy’s successful years, but where’s the drama? We decided the best dramatic arc would come from focusing on Laurel and Hardy’s financial challenges, their health problems, and their career challenges because then you’ve got conflict.”

The tension driving much Stan & Ollie’s behind-the-scenes drama arises from Stan, who bitterly begrudges Oliver for making a movie without him during a contract dispute 20 years earlier. Baird knew Coogan could handle the serious stuff, given his work opposite Judi Dench in 2013’s Philomena. And in the UK, he’s well known for comedic characters including snarky radio disc jockey Alan Partridge and smarmy Portuguese lounge singer Tony Ferrino.

But could he handle the dancing? “I’d never Steve dance before,” Baird says. “We brought in choreographer Toby Sedgwick who taught him to do the steps. Steve worked his ass off until he got it right.” Coogan also altered his footwear to mimic Stan Laurel’s signature schtick. “Stan famously cut the heels off his shoes and boots, which gave him this real flat-footed walk that looked funny. Stan used all these tools to enhance the comedy, so Steve went above and beyond to honor the original performances.”

Reilly had already proved himself as a potent song and dance man when he played the Oscar-nominated “Mr. Cellophane” in 2002 movie musical “Chicago” but in terms of his character’s sheer heft, Reilly faced a massive challenge: Hardy weighed 400 pounds in the 1950s. Collaborating with Guy Speranza (costume design) Jeremy Woodhead (hair and make-up) and Mark Coulier (prosthetics), Reilly went through nearly 100 fittings before settling on a fat suit made of reticulated foam. Each morning during production, Reilly subjected himself to a four-hour makeover before emerging from his trailer in full-girth Oliver Hardy mode.

In and out of costume, the actors rehearsed intensively with Baird for a month. “I don’t like improvisation,” Baird says. “You can only do this kind of physical comedy if you’re so well rehearsed that it looks like you’re just making it up on the spot.” All that preparation paid off in the film’s opening scene, a six-minute tracking shot that follows Olivier and Hardy from their production office to the set of their movie Way Out West. “It’s nine pages of dialogue,” Baird recalls. “We did eighteen takes and used the eighteenth one. Pinewood Studios only allowed us one day to shoot because Solo: A Star Wars Story had all the stages and it was Star Wars’ day off.”

The shot culminates in an intricate song and dance routine that allowed no room for error. Baird recalls, “We replicated exactly what they did in the film, frame by frame, step for step, referencing the routine off of a YouTube clip,” Baird says.

“We even got the actors in the background to do exactly what the extras in the original movie were doing. That was more of the technical process and not a massive amount of fun to do.”

Baird and his actors had a bit more leeway when re-staging Laurel and Hardy’s live act, performed by Coogan and Reilly in theaters filled with hundreds of extras. “We wanted John and Steve in front of a live audience so they could really get the feeling of what it was like to do these routines.” Besides revisiting the couple’s precision-timed slapstick bits, the live performances showcase Reilly’s ability to channel Oliver Hardy’s surprisingly agile body language. “Oliver had this daintiness about him and was very light on his feet,” Baird says. “It was great to see John pull that off.”

While Stan & Ollie delivers plenty of physical comedy, the movie fundamentally functions as “an emotional piece about love and friendship,” according to Baird. “I think the story’s very pertinent for our times in terms of the world having so much division.” He points out that despite their backstage feuds, Laurel and Hardy transcend their differences whenever the curtain comes up. “That’s the sign of a true performer,” Baird says. “When Laurel and Hardy did a show, they’d go out with a smile regardless of whatever might be going on behind the façade.”