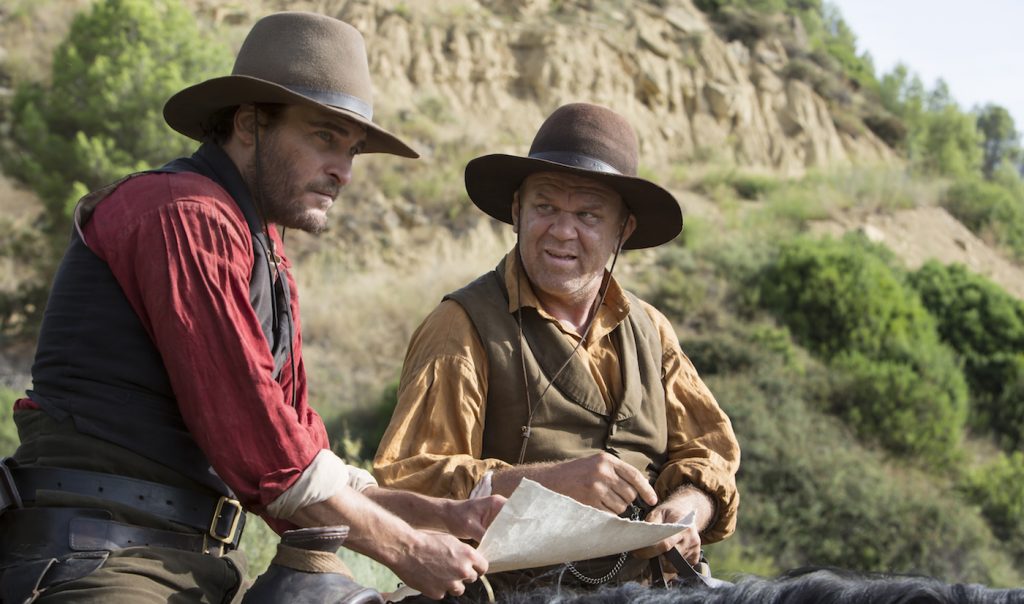 When Patrick DeWitt’s novel “The Sisters Brothers” was published in 2011, something new was afoot in its pages. A bloody western set during the gold rush, it had everything you’d expect; gunfights, whiskey, brothels, and ne’er-do-wells of all stripes lusting after the riches buried in the rivers and mountains of California. These genre tropes, expertly handled by DeWitt, were the grimy, gritty package in which he delivered the story’s real gold— the titular Sister brothers and their endless, hilarious, and often poetic talk. The novel was a page-turner in the best sense of the phrase, with ripping action sequences wadded in the brother’s witty banter. As the two brothers moved south from Oregon into California’s gold country, on the hunt for a couple of men they’d likely have to kill, they engage in what writer/director Jacques Audiard (Rust and Bone, A Prophet) and longtime collaborator and co-writer Thomas Bidegain (Rust and Bone, A Prophet) call a Western taking place in pre-Freudian analysis, in which the main characters engage in endless discussion.

“A lot of the banter was in Patrick DeWitt’s book,” Audiard explains (with Bidegain translating on his behalf). “And we chose the book because he had that strange pre-Freudian quality. The characters had a funny way of thinking and of talking, and they had a sophistication that’s so contrary to typical western characters. We tried to keep that tone because the book is mainly dialogue.”

What’s astonishing about Audiard and Bidegain’s adaptation is how it captures what’s best about the novel and then enriches the plot by deepening the secondary characters. Instead of boiling the novel’s characters and plot down, Audiard and Bidegain deepened it, and along the way made several fundamental changes that make The Sisters Brothers a surprisingly soulful and contrary western. It looks like a western, it bleeds like a western, and it feels like a western, but it sounds like a very funny, often moving meditation on brotherhood, loyalty, and life.

Like the book, the film is set in 1851, with the Sister brothers Charlie (Joaquin Phoenix) and Eli (John C. Reilly) sent by their boss, the Commodore (a practically unseen Rutger Hauer) to meet up with the detective Morris (Jake Gyllenhaal), who himself is tracking a young chemist by the name of Warm (Riz Ahmed). Charlie, the younger brother (a change from the novel) is a drunk and a psychopath, while Eli’s his thoughtful, troubled sidekick. In the book, the Sister brothers are really the only characters with any real depth, and their journey, both literal and figurative, is what the story revolves around. Audiard and Bidegain realized that their movie required proper foils to the Sister brothers, characters who had their deeply held beliefs and motivations.

“It took us time to understand that we needed to elevate the other two characters, because it’s actually a story of two couples, and because we needed the conflict to be stronger, so we needed Morris and Warm to be as important as the brothers themselves,” Audiard says.

In the film, Morris discovers that Warm has created a chemical compound that, when dumped into a river, makes the hidden gold glow beneath the riverbed. This type of discovery would make anyone who had it insanely wealthy, but Warm’s got other ideas.

Audiard and Bidegain’s Warm is a young visionary, a man who wants to use gold to build a Utopian society in Dallas. It’s a significant departure from the book, where Warm has no such dreams, and furthermore, is depicted as a large, bearded redhead of German descent. Audiard says that the casting of Riz Ahmed turned out to be one of the most important decisions he made in the entire film.

“Choosing Riz to play Warm was really a great decision, it changed the movie, it affected the movie in many more ways then we anticipated,” Audiard says. “If we saw that character through a white perspective, you’d never believe the guy. He has this certain something, this Christ-like vision, you trust him. Also the fact that he’s younger,  they’re all following that quality of modernity he has.”

The Sisters Brothers represented the first time in Audiard’s career he shot a film out of sequence. Yet he made sure the very last scene was the very last thing they shot. This required him to use what he considers one of his two allowances to shout.

“There were so many different sets, and the actors were never on set at the same time, so we had to work around their schedules, which was one of the most difficult things on this film,” he says. “I saw once on the work schedule that I was supposed to shoot the final scene, and then the day after that, I was supposed to have another scene…you cannot scream all the time, but once or twice you can [laughs].”

As the Sister Brothers move south, shooting and drinking (in Charlie’s case) the whole way, you prepare yourself for the moment they will inevitably find Morris and Warm. Yet that convergence, which offers a thrilling (and funny) sequence involving a shootout and Davy Crockett coonskin hats, was yet another opportunity for Audiard and Bidegain to script something surprising. Once again, the Warm character, now a fully fleshed out, slightly mystical figure, brings out things in the Sister brothers they hadn’t expected.

“Warm has this role of the revelator; he has that thing, he brings the modern world, he brings Freud with him [both Morris and Eli end up talking to him about their fathers], he brings that social utopia idea, there’s really modernity to him,” Audiard says.

The Sister Brothers is that rare (possibly singular) thing, a Freudian western, buoyed by bold choices by the two writers, a sure hand in Audiard’s direction, and four outstanding performances from the leads. Yet one would be remiss not to mention that John C. Reilly is the soul of this film. His Eli is a searcher and a killer, a loyal brother who will, and often does, get down into the mud with Charlie even though he dreams of being somewhere else, something else.

“It’s important to know that John C. Reilly doesn’t want to be put in a box,” Audiard says. “And he picked me; he gave me the book. He chose me because I would be the instrument to take him somewhere else. I hope it worked.”

It not only worked, it killed.