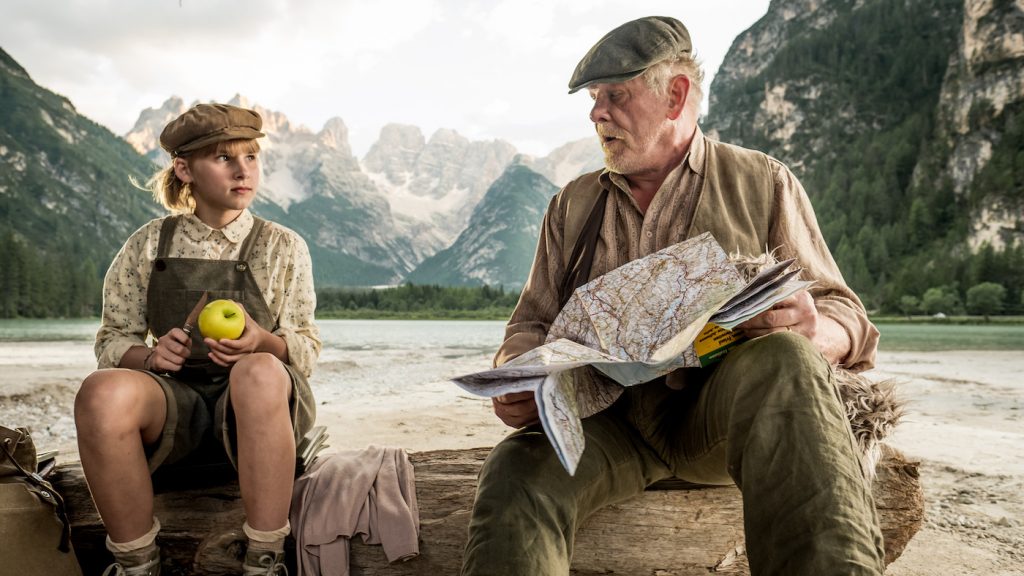 When director Til Schweiger and his team shot Honig im Kopf, about a family dealing with a grandparent’s onset of Alzheimer’s, his team primarily worked where the film was set: continental European countryside, plus a bit of London. Minor interior replacements subbed Germany in for Venice. When Schweiger and his crew reconvened to film an English-language remake, Head Full of Honey, the settings changed, though the locations often didn’t. Husband and wife Nick and Sarah (Matt Dillon and Emily Mortimer) and their precocious ten-year-old daughter, Tilda (Sophia Lane Nolte), were relocated from Germany to England, with grandpa Amadeus (Nick Nolte) beginning his journey in the U.S. and subsequently joining the rest of his family across the pond. To craft these locations, among others, Schweiger and his crew headed back to the same family home outside Berlin, gave it a makeover, and located the best dupe for an older American church interior that they could find.

Where the European locations came up short, however, visual effects and minor studio shoots filled in the gaps. Once again, Tilda and Amadeus take off on a madcap journey to Venice, as Amadeus’s disease progressively worsens. While creating a new look for a similar story in several repeat locations, cinematographer René Richter (who was a new addition to Honig im Kopf’s original crew) also needed to reflect the deterioration of Amadeus’s state through the film’s aesthetics as well as build from scratch the fairy-tale perfect European settings through which Tilda and Amadeus pass. We got to speak with Richter about using visual effects to finalize the pair’s bucolic road and train trip scenes, fleshing out American settings shot in Europe during post-production, and conveying the personal nature of Amadeus’s descent into Alzheimer’s, throughout.

When you began work on Head Full of Honey, what was your approach to retelling the story but making it look quite distinct at the same time?

Actually, I didn’t watch the German original while I was prepping the film. So I tried to find my own interpretation of the script from the beginning. We did a lot of testing and picked the new Hawk Class X anamorphic lenses for the organic look and feel, the close focus and edge distortion. Then we developed a detailed color code for all the locations and for every character.

What were your main challenges or concerns in using mainly German locations to represent the U.S. and England?

That’s right, most of the English interiors were shot in Germany. And lots of scenes have moments of entering or exiting a building. It’s always challenging because we have to find or create matching details, like for example the matching light or the shape of the doors and windows. Sometimes we just used curtains to avoid seeing too much, sometimes we used a green screen and shot plates to match the view. Also, the hotel interiors of Venice were filmed somewhere in Germany. In Venice, we filmed some background plates and added them in post-production. Sometimes there are months between establishing shots of the buildings outside and the interior scenes, which is also very challenging for the actors, remembering the right tonality.

Can you give us an example of how visual effects came in handy to achieve a certain final look?

It is not easy to find a typical wooden American church in Germany. Also to build it is way too expensive (if you just picked a nature reservoir as the location of the funeral). Adding the church in post just made our life way easier. Also, there is no steam train in a perfect landscape, so we just shot drone shots of the backgrounds and added the train in post. Most visual effects we used shooting driving and train sequences. After, again, lots of tests we filmed all these scenes in studios by using huge background monitors. The plates we had to shoot in several angles beforehand. Therefore we used a car with six cameras attached, which we sent through the selected landscapes.

The film is very emotional—how did you create a visual look from the feeling or feelings you got when you read the script?

Actually reading the script feels a bit like conducting an orchestra. You divide the script into single parts and try to build up a rhythm. Each scene gets its own color, which is connected to its emotional level. Also, I try to follow the development of the characters to give them their own tools. Like the character of Nick Nolte has Alzheimer’s, and throughout the movie, he loses his memory more and more. We tried to support his character by filming him first with wider and normal lenses and towards the end with longer lenses with a shallow depth of field. It feels like his horizon gets more and more foggy.

How did you approach filming the family in pretty grand locations—like a castle interior for part of their home—while ensuring that they still came off as fairly normal, dealing with an issue that can afflict anyone?

The setting of the film is not what we call a social drama, which takes place in a realistic neighborhood…it is more told like a fairy tale. Money is never an issue, the look and feel of costumes and interior design [is reminiscent of] older films. The characters do not have the usual everyday life problems. So the topic of the illness stands out in this perfect world even more.