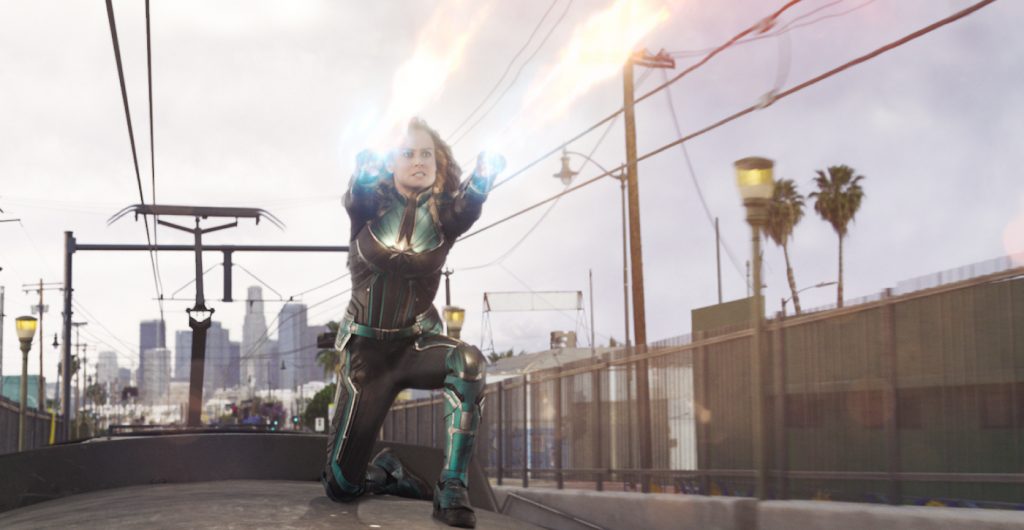 Brie Larson may be the newest member of the MCU, but she probably holds the biggest secrets of any actor in the franchise. Captain Marvel will head back in time to introduce Carol Danvers and her incredible powers, but the fate of the Avengers may ultimately rest in her very capable hands. Larson has been a faithful guardian of all her Marvel knowledge so far, but she knows that some of her costars are better at staying mum than others.

Most notably, Mark Ruffalo and Tom Holland have made the biggest blunders in letting information slip. Ruffalo even gave away the ending to Avengers: Infinity War, but fans didn’t realize until after it was released that the gaffe was for real. Benedict Cumberbatch has become Tom Holland’s unofficial babysitter on press tours to keep him from spilling any critical new information.

With that in mind, the extremely discreet Larson premiered a new look at the Captain Marvel characters today with a rib to her future costars. Larson, Jude Law, and Ben Mendelsohn will grace the cover of the March 2019 Empire magazine. Larson joke that she wasn’t sure if sharing it was a leak, but that someone had to spill secrets in 2019. She teased that she would be the “@MarkRuffalo of 2019.”

Honestly not sure if I’m spoiling this @empiremagazine cover but whatever, someone has to be the @MarkRuffalo of 2019. This hits stands Thursday. pic.twitter.com/NUdqWndAIb

Obviously, both the cover and its release were likely sanctioned by Marvel and Empire, but it’s a clever dig nonetheless. The exclusive cover looks befitting of the most powerful being in the MCU. If this photo is any indication, Carol Danvers is going to make an unforgettable entrance in her screen debut.

Larson plays the first female character to feature in a standalone film in the MCU, so people will be giving her the full court press to spill information. With all that pressure, she seems to be calm, cool, and collected. Jokes aside, don’t expect any slip-ups from Larson.

Captain Marvel flies into theaters May 8.