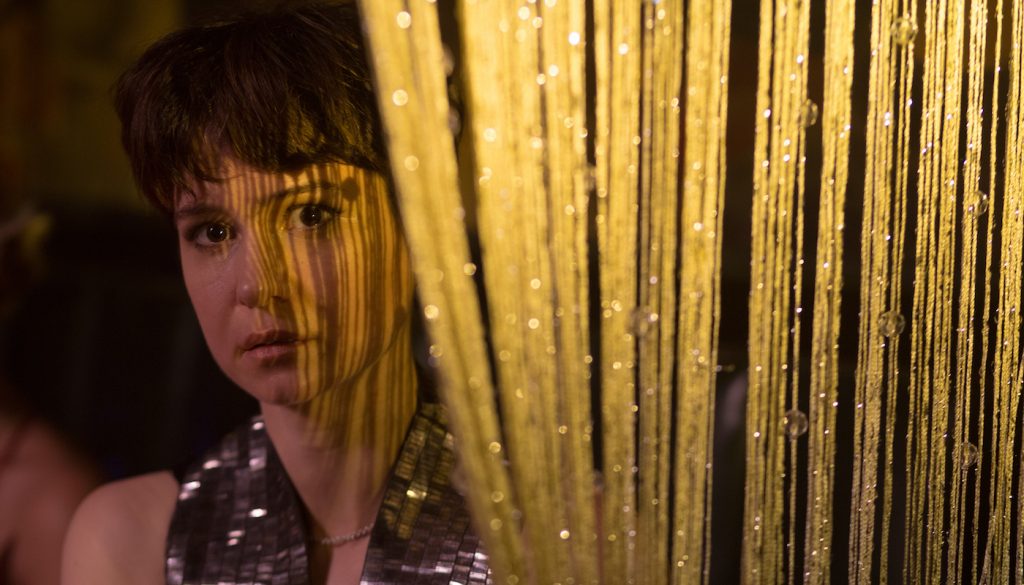 Like her brooding State Like Sleep heroine Katherine Grand, filmmaker Meredith Danluck lost a close friend to suicide. Like Katherine, she moved from the United States to Belgium to live with a highly secretive partner. And like Katherine, Danluck rushed to a Brussels hospital after her mother suffered a stroke. Now currently available on Digital, On Demand, and in select theaters, State Like Sleep may draw many of its plot points from Danluck’s adult life but one of its most offbeat sequences comes straight out of a movie she saw at the age of seven.

“As a kid, I was obsessed with Out of Africa and Robert Redford,” says Danluck from her home in Topanga outside of Los Angeles. This helps explain a scene midway through the film when Katherine, played by Katherine Waterston (Inherent Vice, Fantastic Beasts franchise), picks up a man at a nightclub and returns to her apartment. There, the man insists that she draw a bubble bath. He then shampoos Katherine’s hair for sexual gratification. “Somewhere deep inside my seven-year-old psyche, the image of Robert Redford washing Meryl Streep’s hair stuck like glue and turned into some kind of weird fantasy for me,” Danluck laughs. “That’s the only logical explanation I can come up with for the movie’s big shampoo scene.”

Filmed partially in perpetually over-cast Brussels, State of Sleep follows Katherine, a glum photographer, as she tangles with contentious family members, does drugs with a charismatic dealer (Luke Evans) and sleeps with a mystery man (Michael Shannon) while trying to make sense of the suicide-by-gunshot that ended the life of her celebrity husband (Michael Huisman) one year earlier. Waterston appears in nearly every scene of the movie, structured by Danluck to reflect psychiatrist Elisabeth Kubler-Ross’s four stages of grief: denial, anger, bargaining, and acceptance. “This started out more as a story about loss,” she says. ” Katherine is the heart and soul and muscle of the entire film. After we wrapped, I just looked at Katherine and said I almost feel like I have to apologize because I just put you through hell.”

For her feature debut, Danluck used skills she’d honed over several years as a maker of experimental shorts. Graduating from School of Visual Arts in New York she crafted video installations for Museum of Modern Art, documented the adventures of a cliff-diving teenaged girl for Refinery 29 and created visuals for Beyonce’s 2014 “On The Run” concert tour with Jay-Z. How’d she get that job? “Beyoncé did a Pepsi commercial and commissioned a couple of short films that used some of her music,” Danluck recalls. “I did one of those videos so Beyonce asked me to do something similar for the tour. It was awesome going to the Rose Bowl and seeing things I made projected onto five screens as part of this environment for Beyonce and all these dancers.”

Around the same time she teamed with Beyonce, Danluck attended the 2013 Sundance Writing Lab and Directors Lab to develop State Like Sleep. “I had these great mentors and came to understand that as an artist, losing ego is a big part of the search for authenticity and truth,” she says.

Danluck also found inspiration in Joan Didion’s memoir “The Year of Magical Thinking.” “In the opening pages of her book Didion talks about putting together clues for this puzzle as if she could reverse the outcome of her husband’s death by becoming this kind of amateur detective,” Danluck says. “That’s when I realized, ‘Oh I’m writing a mystery!'”

Primary film influences included Roman Polanski’s 1988 thriller Frantic and Juliette Binoche’s star turn as a grieving widow in Krzysztof Kieslowski’s 1993 masterpiece Blue. Danluck also studied 1944 film noir classic Double Indemnity She says “I loved the whip-smart dialogue between Fred MacMurray and femme fatale Barbara Stanwyck. They couldn’t really talk about sex in the forties but there’s so much heat in the relationship. I used that as an inspiration for the exchanges between Katherine and Edward.”

Embedding State Like Sleep with nods to great thrillers from the past, Danluck made sure she grounded the action in the mindset of her depressed heroine. “When you deal with death, I feel like there’s a real sense of illogical almost psychotic behavior during the denial and bargaining stages. Once I cracked the code, I was able to borrow from the mystery genre and align it with these stages of grief. Then I was off to the races.”