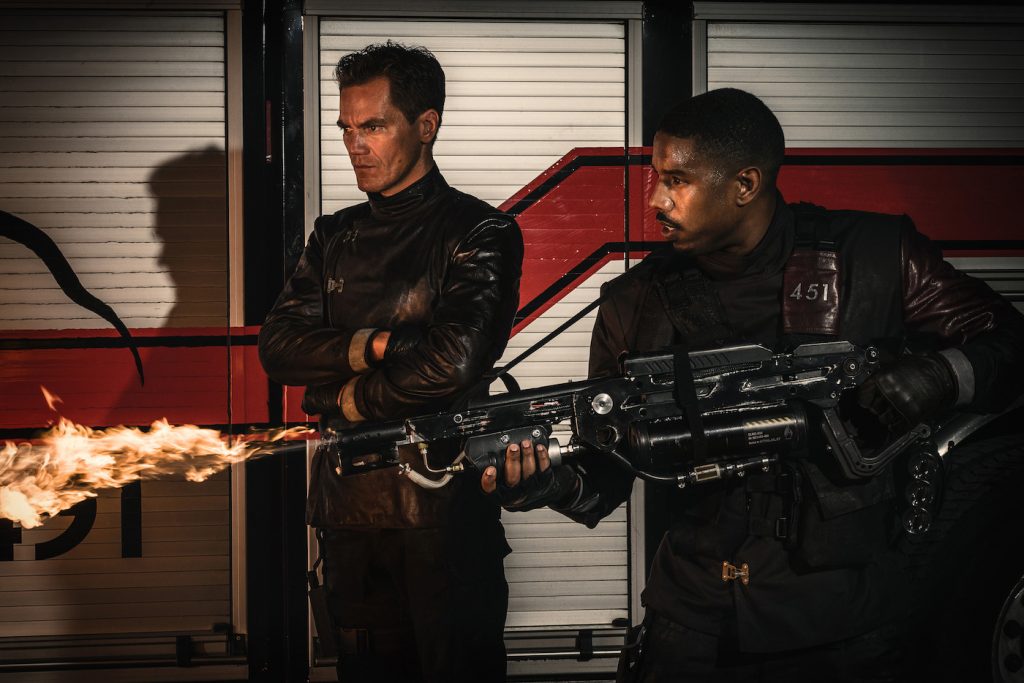 We’re living in times that are increasingly concerning. Okay, that’s a massive understatement. After the election of Donald Trump, dystopian novels became increasingly popular again with reissues of novels like George Orwell’s 1984 and Margaret Atwood’s The Handmaid’s Tale. The latter novel, which is now a bleak and hugely popular Hulu series, is a good example of the types of stories audiences have been looking to turn to in confusing and trying times.

Ray Bradbury’s legendary novel, “Fahrenheit 451,” is one of those stories. Published in 1953, Bradbury captures a world where firemen start fires instead of fighting them. And what are they setting on fire? Books. One of those firemen, Guy Montag (played by Michael B. Jordan), becomes disillusioned and questions why he’s so set on this knowledge ruining mission. With the rise of fake news, social media and technology—Fahrenheit 451 might be more relevant than ever. Which is what led director/writer Ramin Bahrani to adapt Bradbury’s novel for a modern era. Jordan stars alongside Michael Shannon as his foil Beatty, and Bahrani captures the themes of Bradbury’s work while putting it in an eerily not-too-far-from-the-future world. The film premiered on May 19th. Baharani jumped on the phone to talk with us about Bradbury’s legacy, working with the two Michaels and reading books.

Was it nerve-wracking to adapt such an iconic novel?

Very much so, at one point I tried to give HBO the money back and say, “I just cannot do it.” I had to make big, big changes and my interest was, how could this be modernized to include the internet and technology that, if a fireman stormed into your home right now and burned all your books, you would be very upset but you would just download them all again in the cloud.

I think a few months into the process it was leaked to the press that I was writing the script, and I foolishly looked at the comments and people were already angry. I just resigned myself to changing whatever I wanted in the story but trying to stay true to the themes and ideas. I turned to Bradbury for courage: he adapted his own novel twice, once as a play and once as a musical. He seemed open to interpretation as an artist in film and so I thought I would just go with it.

Obviously we live in a political climate right now where this is incredibly relevant. How did you want to modernize it to tie to what’s going on in our country right now without being heavy handed?

Well, one thing was that I was working on it in 2016, before the election cycle started. Bradbury, in his own way, predicted fake history and alternative facts and a post-truth era. The firemen want to know who started the first fire department, and they can open their handbook, which says Ben Franklin started the fire department to burn books and then they believe that.

I think it’s just the same as what we have now in the internet, in a much more rapid and frightening way. We click on the headlines only, we don’t read the articles, we just click on headlines that an algorithm has told us we want to read, it would make us happy. We click those things and we just believe them, and we like and share them and we stay within a tunnel of whatever truth we want to believe in to keep us happy. Bradbury frighteningly warned us about all those things. We introduced Yuxie, which is kind of like a Alexa or Siri system that you can talk to and can tell you things you want to know. Unfortunately we now know those are also devices that keep an eye on you. How could I not include that? If the firemen are looking for people who have books in their homes, I couldn’t ignore the fact that we’re being monitored all the time by our own technology. An audience would be, well, this isn’t scary, we all know that we’re being watched all the time. So you have to include those things.

It reminded me so much of Siri and then having Siri betray you. It’s very scary.

I know that it’s been a few years that I have taped over my laptop camera, and I remember 3, 4 years ago people would say, why are you doing that? Nobody asks anymore why you’re doing that. When did you read the book?

High school, and then I re-read it after the election pretty recently.

I read it initially in high school, that’s when I first discovered it, and then I re-read it in 2015, which is when I approached HBO about it. It’s my sixth film, it’s my first time adapting anything, my other scripts were original. But it was the first time I ever wrote something and thought to myself: high school students, I really want them to like this movie. I want them to be impacted by this. I had a very hard time imagining a high school student being interested in only physical books, I wasn’t even sure they would even know what they were anymore. I wanted to make sure that the younger generation also appreciated it.

Yes. Well, that’s just inspired by Bradbury. He said that the fire shows happen at night, which went to the nocturnal look of the film. He also said that the shows were also unnecessary, they were just shows to entertain people. That felt like the world we live in, where news, election cycles, things have just become entertainment, things that we click and enjoy from our homes but not really read them anymore.

When you were going through the novel, what were the things that felt unnecessary for you to tell? I noticed Guy doesn’t have a wife in your version, and Sofia Boutella’s character [Clarisse] is much more fleshed out. What was that decision making process like?

Bradbury, in his adaptation, had let Clarisse live and I liked that idea. The Book People, the people that Montag encounters at the end of the novel, that was a challenge for me because in the novel, two thirds of the way through, Montag kills Beatty, and suddenly there’s a third of the novel left but the climax already happened. In a screenplay format, he killed the main antagonist, I can’t keep the movie going for another third. So, I brought in the Toni Morrison character in earlier so they would have an impact on Montag earlier in his journey.

We actually shot scenes with the wife [Mildred]—they’re very good scenes with a very talented actress, Laura Harrier—she was very good in those scenes, her and [Michael B.] Jordan had a great chemistry. But in the editing room, they just seemed unnecessary because in the novel she’s a bit passive, she just watches screens. I realized that in our world, we know what that means if we look at a screen all day. In 1953, there was something amazing about it, having a wall-sized screen that you could interact with. It seemed redundant to an audience. I had already cut out Mildred’s suicide, her suicide attempt is also a big part of the book. I cut that out because I just didn’t know if one movie could tolerate two suicides.

I felt that the relationship between Montag and Beatty felt so much more complex. I’m sure working with Michael B. Jordan and Michael Shannon is absolutely insane, how was beefing up that relationship? It did feel so central to your adaptation.

The most interesting thing he did inside the book was that relationship because they are the closest people to one another. Beatty seems to quote all these books but it never really goes into why or how he knows them all. I thought he should be much more tormented than that, much more contradictory than that. He oddly keeps giving Montag chances in the book, and he knows Montag is up to no good, but he never really destroys him straight out. I wondered why that was, and I thought there was a chance to dig in to the two men in terms of [Michael B.] Jordan’s interest in learning and uncovering what he thinks is the truth and Shannon’s character in wanting him to know only so much about it. And Shannon being trapped, he seems very trapped by his own fate somehow. He can’t actually do what Jordan does at the end of the film, which is break free from the whole thing. I thought it was a very interesting relationship between truth and untruth, between fact and fiction, between fate and freedom, between being happy and learning, which doesn’t always bring happiness. Sometimes learnings things brings misery.

I loved just how much you incorporated actual literary references, especially with the book people. I thought that was a great way to be like, hey, this is actually what we would lose. Same thing with the opening credits.

We tried to put so many… I confess, I picked a lot of my favorite ones. But we picked them very carefully, tried to pick books with so many languages, cultures, genders. It’s a bit more of a wider range than what was in the novel. We have so many different types of books now. There’s a lot of hidden books and a lot of quotes, a lot of weird references to books throughout the whole film.

What do you hope that audiences get from your re-telling of this?

I hope they would just read a book from cover to cover. I hope they will take Bradbury’s warnings at heart. In the end, I was in some way a servant of Bradbury’s themes and ideas. He predicted a lot of things, he predicted false facts and fake truth and this whole obsession of being happy all the time. I think now we would rather be happy than to actually lead, and think, and engage, and be critical. I think even if it’s difficult, we should be engaging and trying to understand something more truthful rather than just being happy. I think this is something Bradbury warned us about, that we’re going to lose so much if we don’t attempt to think and read.