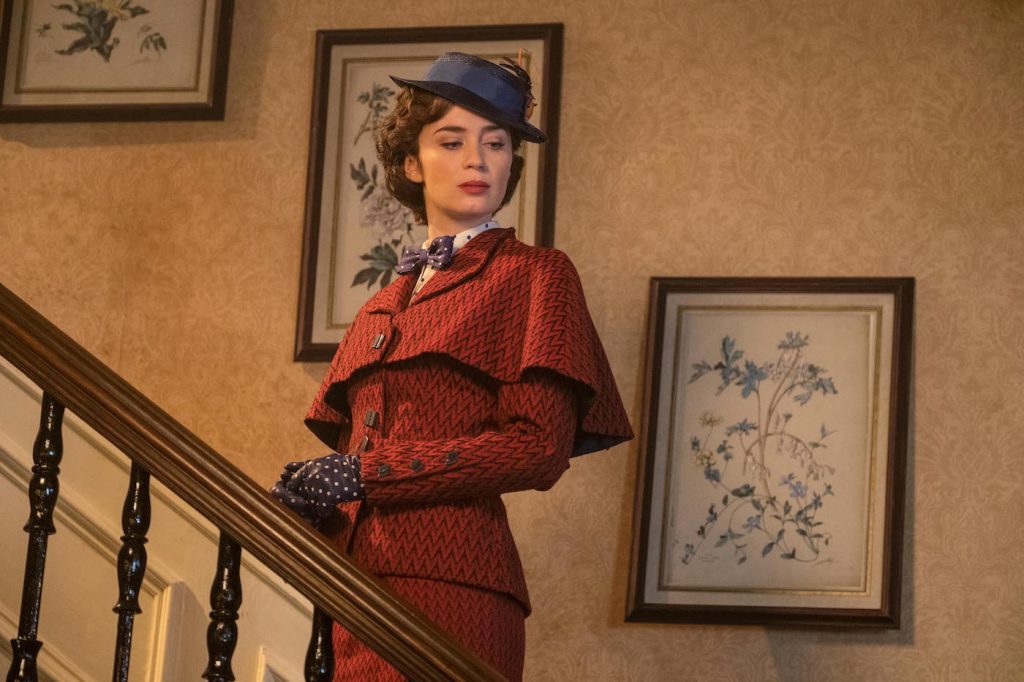 Three-time Oscar-winning costume designer Sandy Powell came to the production of Mary Poppins Returns with fond memories of the 1964 original, which was the first film she ever saw as a child. She was excited to be a part of creating the look of this new incarnation of the beloved nanny, especially the iconic arrival costume. She spoke to The Credits about the challenges and joys of working on one of the most anticipated films of the year.

Invention is always so much a part of your work as a designer. In Mary Poppins Returns, I’m sure much it was a part of creating the costumes in the animated sequences. They blend live action and animation so well. How did you finally determine a solution that truly made them appear part of their environment?

Trial and error, and luck! Basically the animated sequence I thought about even before I started work on the job. Although I knew for the look for Mary Poppins, her main arrival outfit was really important. Really very early on, I thought it would be great to make the live action actors look like they were part of the animated world, unlike in the original. I always loved the original, just like everybody else, but I always felt that they looked removed for it with the real clothes, so I thought wouldn’t it be great to try to make the clothes look like they’ve been painted by the animators as well, but actually be 3D. I pitched it at a sort of pre-pre-pre production meeting with everybody, and they all thought it sounded like a great idea. So then the next thing was to contact the animators and ask them about their style of animation, and the use of paint and color, and whether it was going to be a wash.

What did the animators tell you?

They had only done very preliminary things at that stage and hadn’t designed any characters or anything, but I was given examples of how the paint would work for them. Then I went ahead and I just started playing around with my painting team, just flat on pieces of white cloth, different ways of finding and putting the right kind of paint on the right kind of fabric.

How did you choose the era for Mary’s look?

The Royal Doulton ceramic had 19th-century figures on it, so that’s why the costumes would automatically be from that era. We played with prototypes, but we didn’t do that many of them. I got the shape of her costume. We made it completely in white, and then handed it over to the paint department, and had them experiment with how they would paint it, and how it would look. When the design was actually established and approved, and everybody thought yes, this is going to work, we made the costumes for real. That meant that the cutter would mark out the pattern pieces, and the painters would do a first wash on the pattern pieces before they were put together, and then they would be put together, and they’d work on it after that as well.

There’s also a difference in the way the first part of the animated sequence is done, and the costumes for the dancehall scenes. Those costumes almost look like animation concept art from the early 1960s.

We worked on both sets of costumes simultaneously, the carriage costumes and the ones in the music hall. Obviously, the music hall costumes would be different, because they’d be stage costumes. They would be bolder and stronger. With the color palette, I spoke to Rob about what colors we should use.  I wanted purple and magenta, as opposed to the pastels of the other world. Coming up with the final product was, again, just trial and error, until I found shades that I liked. What was really great was that the costumes came first, and then they were photographed, and the animators built the world around the costumes. The whole musical scene, which is all purples and pinks, came from the costumes first, and the carriage scene, that outdoor world, came from them building the world around the costumes. It was a really fantastic experience. It was absolutely terrifying to be coming up with those costumes first, without knowing what they were going to look like, or if they were going to work!

I know you draw inspiration from a wide variety of places.  Can you talk about some of the images on your picture boards for a few of the costumes in the film?

For Emily Blunt’s Mary Poppins costumes, I really did reference 1930s fashions directly. I had very elegant images from Vogue and Harper’s. She really is wearing quite up-to-date fashion, although conservative, because she’s a nanny. Really the line and silhouette are taken from the fashion of the period. For Topsy, I referenced artistic, bohemian types. Female artists, eccentrics and figures from the early 20th century. I had images of Edith Sitwell and Nancy Cunard and Greta Garbo for her. Iris Apfel as well, that sort of too-much-jewelry kind of thing. Those women of a certain age in New York who look amazing, and wear brightly colored pieces, and pile it on with the makeup and the hair and the clothes. When women get to a certain age, they can do whatever the hell they like!

You create such meticulous, complete costumes, right down to the threads you use. Your accessories are spectacular. In addition to the Robin on Mary’s intro outfit, what are some of the items or little touches to look out for?

Well, for one thing, the buttons on Mary’s coat. We actually made them by hand. I had them made in the exact hue of the coat, with silver edges. We made all of those. I think the robin on Mary’s hat is really my favorite. Although the robin references and is an homage to the original, it is different, and it is a 1930s version. I didn’t want to do flowers, that didn’t seem appropriate for this Mary Poppins. She’s a lot more elegant and chic. It had to have some kind of decoration, and I wondered what other kinds are there? There are ribbons and bows, which aren’t her, or birds. I thought, “what kind of birds?” I immediately thought of the robin from ‘A Spoonful of Sugar’ in the original. So that was my ode to it, a little, embroidered robin. I had somebody employed just making robins from different materials. In the end, it was totally embroidered. The wings are just made out of embroidery thread, as are the feathers. They’re gorgeous.

Had you worked with Meryl Streep before? It must have been interesting to build a costume for her, with Topsy being such a flamboyant character. What were the costume fittings like?

She’s hysterical! She just puts the costume on, and spins and twirls and dances. The costume was designed for movement. That’s all she does is a big song and dance number. Rob had his one stipulation. He wanted fringing on her. He knew what she was going to be doing, and he wanted that kind of movement. I knew I wasn’t going to do a flapper dress, so the costume started with the fringing and went from there. So every time we saw her, she danced. Whatever it was we put on her, we looked at how it moved.

Do you have a favorite costume from the film?

It’s usually the last one I’ve done. When it works, I love it. I am particularly proud of the painted ones, though, I have to say, because that was the risk, and it’s so great when a risk pays off. I’m also really really happy with Mary Poppins’ new look, the look everyone knows now. I’m so happy with that.

Featured image: Emily Blunt is Mary Poppins in Disney’s MARY POPPINS RETURNS, a sequel to the 1964 film MARY POPPINS, which takes audiences on an all-new adventure with the practically perfect nanny and the Banks family. Courtesy Walt Disney Studios