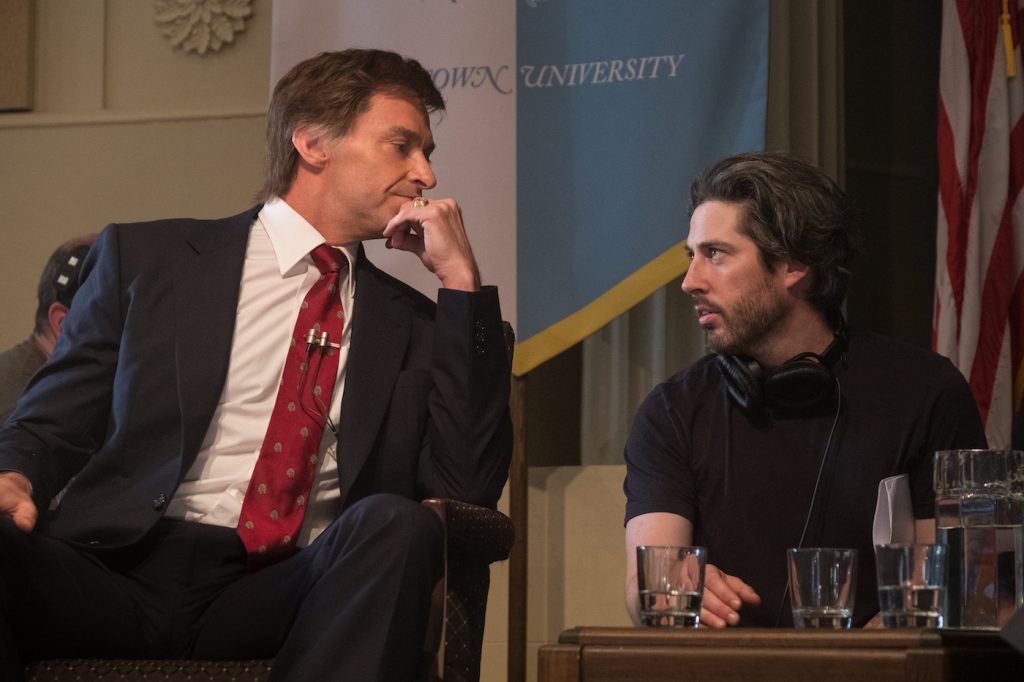 “I don’t trust any filmmaker that says they have all the answers. I make movies because I have questions,” the writer/director told The Credits at a screening of his new film The Front Runner at the Denver Film Festival.

“All my movies have questions and they leave open-ended because I want the audience to walk out and view the rest of their life through the lens of the movie,” he said.

His new movie, starring Hugh Jackman as Gary Hart, follows Hart’s 1988 presidential campaign. Hart was the presumed front-runner at the time he announced his bid for the Democratic nomination. But a sex scandal interrupted his plans and, in the span of one week, upended the race.

Reitman wrote the film with the help of Matt Bai, a long-time national political columnist, and Jay Carson, who was a press secretary for Hillary Clinton’s 2008 presidential campaign. Both understood the theme of raising questions that Reitman brought to the movie.

“None of us like to write message movies that tell the audience what to think. I find those to be really boring and predictable because as a writer I know what’s going to happen on page 120 when I start page one if it’s a message movie,” Carson told The Credits. “I always approach writing with questions, that’s why I start writing something. And with this one, we really wanted to leave questions with the audience to try to start a discussion.”

Reitman has explained that he wanted the film to capture a feeling of chaos on the campaign trail—with multiple conversations going on at once, things happening off-screen, and overlapping action. Early in the film, characters are introduced at a restaurant where dozens of campaign staffers are gathered around multiple tables dissecting Hart’s first presidential campaign in 1984. The buzz of conversation when the scene opens is as overwhelming as walking into a party of strangers.

“We used Michael Ritchie, Robert Altman as inspiration for that from a filmmaking standpoint but it also just feels like how campaigns feel,” said Carson. “In a campaign, you’re packing two days of work into every one day and that’s going to create a lot of chaos. We tried to portray that and give the movie that peripatetic feel.”

In the movie, the tightly-shot chaos of the campaign often contrasts with the sweeping vistas of the Colorado mountains Hart called home. Hart, who would have been the first Democratic presidential nominee from a western state, made his home state a pillar of his campaign.

“He made the point that he wanted to be the first president to come out of the west, that he had new ideas and big ideas,” Reitman said. “He did have new ideas and in every respect was a great Kennedy-esque candidate and that’s what makes him such an interesting litmus test for what’s on our minds right now.”

The movie, which opened on Election Day in New York and Los Angeles, is clearly designed to hook onto the news of the moment even though it depicts the past. It asks whether we treat our politicians like celebrities and how far is too far for journalists to go in doing the job of scrutinizing public figures.

“Hopefully 1987 allows a prism to have a sane conversation about all the things that are on everyone’s mind and are certainly on my mind,” Reitman said.

Carson added that the three writers worked hard to balance in the script dedication to realism and the heavy topics of the story with entertainment.

“Ultimately we’re not showing people two hours of C-Span,” said Carson. “It’s a riveting movie, it feels like a thriller. I think the story itself is a really gripping one. But we wanted to make sure that it portrayed human beings as human.”