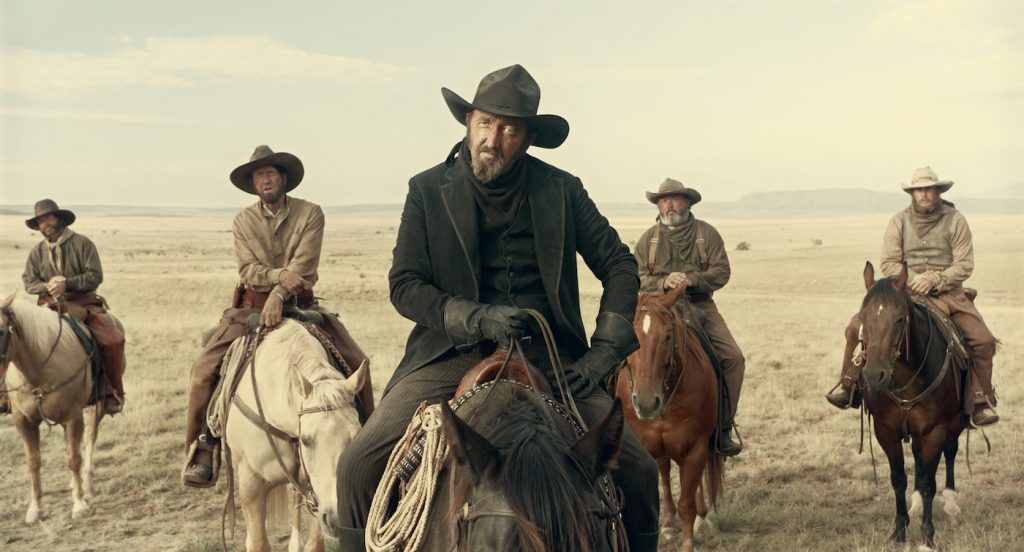 Joel and Ethan Coen‘s new anthology western The Ballad of Buster Scruggs offers six darkly comic 19th-century vignettes designed by the brothers’ longtime collaborator Jess Gonchor. Oscar-nominated for his contributions to the Coens’ True Grit and Hail, Caesar!, Gonchor initially thought the movie, which launches Friday on Netflix, would be a snap. “When the guys gave me the script and I read it top to bottom, it seemed easy on the surface: ‘We’ll get a couple of covered wagons.’ But I can promise you, this was the hardest job ever because as it turned out, every single little one of these things needed so much planning and research. None of the stuff existed. We had to build everything from scratch.”

For example, the title story follows Tim Blake Nelson’s singing cowboy into a desolate Monument Valley cantina, described in the Coen’s script as a “rude small-windowed place with rough wood appointments and a plank top bar.” Gonchor says, “I felt like this place needed to be a little blip in the middle of nowhere, so we made it indigenous to this arid, red clay environment, like a mushroom growing out of the ground. From there I thought about that opening scene in [1963 western] How the West Was Won, where they go to the ticket booth on a train platform and there’s hardly any roof. We made the cantina so it’s falling apart and dusty, with all this light leaking into the place. I figured if it’s going to be a dry cantina, let’s make it bone dry.”

Gonchor’s ability to extrapolate vivid locations from spare descriptions has earned him design responsibilities on seven consecutive Coen Brother movies dating back to No Country For Old Men. How did Gonchor get the gig in the first place? “I brought in this big research book and showed them what I thought the movie should look like,” says Gonchor, who caught the brothers’ attention with Capote, his first feature film assignment. “I think the important thing for them was that I understood the material, but we also hit it off on a personal level.” He laughs. “Either that or they were sick of interviewing people and just said, ‘Okay, take the job!'”

As they do on every movie, the Coens firmed up each detail for The Ballad of Buster Scruggs before filming began. The brothers’ improvisation-averse work ethic appeals to Gonchor. “When you get to the set of a Coen Brothers movie, everything is buttoned up and you know exactly what to focus on,” he says. “They don’t just storyboard action sequences; they storyboard every single shot in the movie. And they don’t get caught up in, ‘Oh wait, look at this over here, maybe we should try that.’ The best thing about working with these guys is, they stick to the plan.”

During pre-production for Buster Scruggs, Gonchor assembled mood boards and a book of visual references, then pitched his ideas to the Coens — with a little help from Led Zeppelin. “I love music,” Gonchor explains. “When I showed Joel and Ethan the mood boards for my Oregon Trail research, I played them Led Zeppelin’s ‘Going to California’ song. Maybe they listen to the music, or not, but that’s how I like to put things together. I look at rhythm and framing and pace because production design is not styling. It’s not a print ad. It’s a moving image and you have to tell a story.”

The story for Buster Scrugg’s Oregon Trail episode “The Gal Who Got Rattled” required Gonchor and his team to construct 15 covered wagons. Inspired by John Wayne’s 1930 western The Big Trail and built in New Mexico, the wagons were then transported by car-haulers, two at a time, to Scott’s Bluff, Nebraska. There, Gonchor conducted additional research at the local Conestoga Museum. “These Conestoga wagons are huge,” he says. “When these pioneers moved across the country, they didn’t have cute, little covered wagons. They were 30 feet long! We built everything — the wheels, the chassis, the hoops covered with canvas — just like they would have done in the 1800s.”

Gonchor’s most beguiling Buster Scruggs build can be seen in the “The Meal Ticket” episode, which tracks a limbless Shakespearean actor and his manager as they travel from town to town in a horse-drawn wagon. “The whole thing is a little bizarre and I hadn’t really seen anything like it,” Gonchor says. “I sort of based it on old gypsy wagons and came up with this top-heavy trailer or carriage where you can unfold this little stage, set up the footlights and hang the curtain. At the same time, the manager and the actor live together in the back of the thing. And I wanted to made it look like the show was well traveled so I put stickers on their steamer trunks from Egypt, the Orient, all these magical places. I love creating that kind of theatrical piece.”

Filmed in Colorado, “The Meal Ticket” also features a “Genius of the Barnyard” carnival attraction starring a chicken that supposedly does arithmetic for paying customers. Gonchor traces his affinity for this kind of slightly surreal environment to his roots in the theater. “I did everything,” says the Brooklyn-born designer. “I worked on plays in high school, college, summer stock. I did lighting, set design, set construction, backstage crew. I learned to take a roll of duct tape and a tin can and tell a story. That’s my background and I think it’s really helped me, especially with the Coen Brothers movies, because their sets are always a little bit odd.”

Featured image: Ralph Ineson as “The Man in Black” in The Ballad of Buster Scruggs, a film by Joel and Ethan Coen.