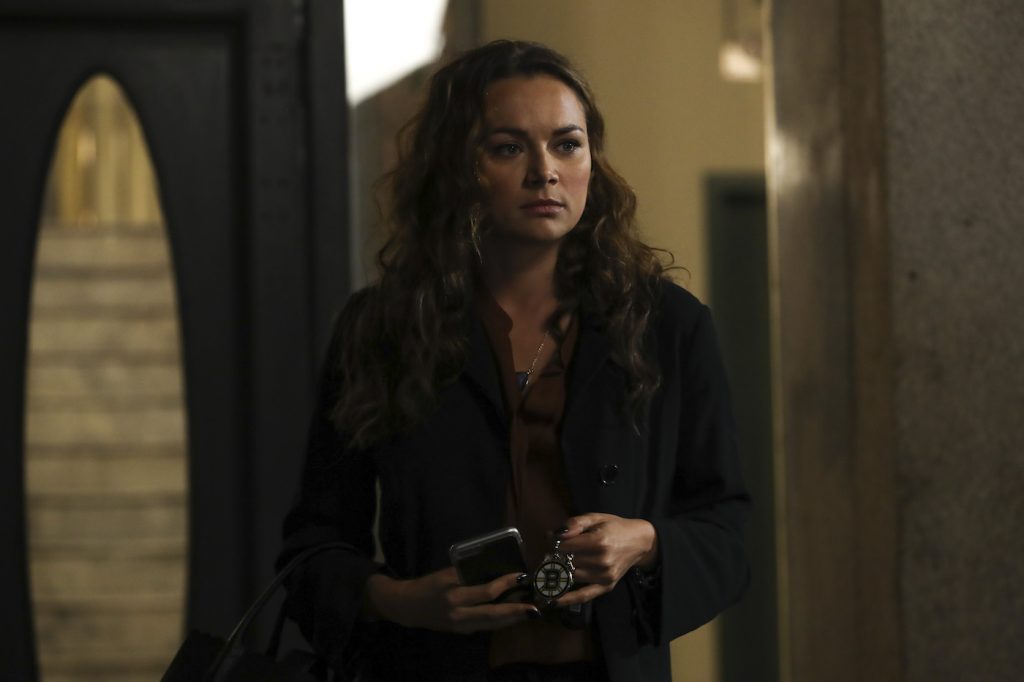 A few short years ago, A Million Little Things star Christina Ochoa was driving for Uber in Los Angeles, wondering whether or not she should go back to Spain. The grand-niece of the 1959 Noble Prize winner Severo Ochoa (a physician and biochemist who secured the prize for his work on the synthesis of RNA) and the daughter of acclaimed Spanish sculptor Victor Ochoa, Ochoa has many other passions. She has a deep, abiding love for both the arts and sciences, specifically the ocean. She studied oceanographic engineering at Universidad de las Palmas de Gran Canaria off the coast of northwestern Africa, and then went on to advanced marine biology studies at James Cook University in Australia, focusing on Elasmobranchii, the subclass that includes sharks and rays. She was taking courses in particle physics before she finally took on acting full-time, so Ochoa had plenty of interests (and fluency in both English and Spanish) to transition into should she decided to give up Uber, acting and Los Angeles entirely.

“Then I got Renn on Animal Kingdom,” Ochoa says, and everything changed.  “We go back in January, and I feel very lucky to be a part of that family.” Animal Kingdom is based on David Michôd’s 2010 Australian crime drama of the same name (Michôd is an executive producer on the series), with the ruthless Australian crime family at the heart of the story now hailing from Southern California. Ochoa stars as Renn Randall, “a drug dealer, surfer, badass, free spirit, someone who’s wild and volatile.” Renn is the on-again/off-again girlfriend of Craig Cody (Ben Robson), the middle child in the crime family, which Ellen Barkin’s brilliant matriarch Janine “Smurf” Cody leads. Animal Kingdom will return for its fourth season next year on TNT.

Animal Kingdom proved a bloody good calling card for Ochoa. She landed the lead role in SyFy’s gonzo Blood Drive, shortly after that. This role seems, in retrospect, comically fitting for an actress who was once driving Uber. Blood Drive depicts a dystopia in which the United States has been torn in half—literally—by an earthquake, and features a death race—the titular Blood Drive, in which Ochoa’s Grace D’Argento was more than suited to take part in. Ochoa’s character was a deeply dangerous woman who was forced to partner with a cop from the LAPD to take part in the race. “I’m a femme fatal, and I’m literally throwing people in the engine of my car because my car runs on blood,” she says. “It was so much fun shooting that show.” If she imagined any unruly or unkind Uber passengars while filming the series, she didn’t let on.

From taking on juicy, earthbound roles as a drug-dealing surfer and a woman who feeds her car people, Ochoa next took to the skies. She landed the starring role in The CW’s Valor, centered on a U.S. Army base that houses an elite unit of helicopter pilots trained to perform clandestine missions. The show focused on Ochoa’s Nora Madani, one of the first female pilots in the group.

“This was a very different role,” she says. “This is a character who was always trying to be composed, yet she was impetuous and impulsive and headstrong. I loved that so much about her, and really, all of these characters have been free.”

These powerful, willful characters made her current role as Ashley Morales in ABC’s A Million Little Things (Wednesdays, 10/9 central) so appealing; Ashley’s grounded in a reality that, despite being far less wild than her previous roles, offered Ochoa a chance to play someone very unlike like herself; someone more closed off.

“The main draw for A Million Little Things was it was a hundred and eighty degrees to the kind of roles I’d been playing,” Ochoa says. “All of the other roles have a lot more Christina in them than Ashley does, she’s a little bit more subdued, more mysterious, more calculated, she doesn’t wear her emotions on her sleeve. She’s a little more subservient than the roles I’ve taken on.”

A Million Little Things revolves around a group of friends reassessing their lives when one of their close friends, Jon (Ron Livingston) commits suicide. Ochoa’s Morales is not in that tight-knit group, and her character might hold the key to unraveling the series central mystery; why did Jon take his life? Morales was Jon’s assistant, and his shocking suicide propels her into the lives of his friends and his widow Delilah (Stephanie Szostak).

“Ashley is the perfect example of how you can question your own judgments of people,” Ochoa says. “She’s the outsider, and we don’t get to see her inner workings or her justify her actions. We don’t know any of that because she doesn’t have heart-to-hearts with Delilah, or get a scene when she’s in the living room with her husband explaining herself. We judge Ashley the same way we judge people in real life, exclusively on their actions and not their motives. That was interesting.”

As her first major network role, A Million Little Things is introducing Ochoa to a whole new audience, playing arguably the most exciting character on the show.

“Her motives come from love, her love for Jon and her family, her love for something she’d never had,” Ochoa says. “But, that doesn’t necessarily mean these motives justify her actions. Viewers are judging her based on the little slivers of the information they get, which are always one-sided. That was exciting for me to take on, as most of the time on TV you’ve got a ton of exposition, all the whys spelled out, so we can love and empathize with these characters, even if they’re doing terrible things. We don’t get to see that here.”

Ochoa has found A Million Little Things novel in other ways, too. There’s very little information about the plot given to the actors in order, as she says, to keep from “cross contaminating our performances.”

“That was a challenge because I like to build my characters from the ground up, but at the same time it’s rewarding in a new way,” Ochoa says. “I’m pushing myself to give this character an authenticity, without necessarily constraining myself to a specific backstory.”

Ochoa believes that the strength of the show isn’t the mystery of Jon’s death, but the blank page his suicide has left behind for his friends.

“I don’t know if we’ll ever get an answer to why Jon killed himself in the first season. To me, what’s more important than why he did it is why he didn’t reach out to these people, why he couldn’t tell this great group of people what was going on. The questions are always about the relationships more than the mystery.”

Ochoa says that working on a show with such a heady central conceit as A Million Little Things requires the ability to put the material down at the end of the day.

“I hope I’m not taking this material home with me, it’s definitely one of those projects where it tackles very dark, very intimate feelings, and I think we all have to tap into a little extra layer of darkness to tackle these issues honestly and truthfully,” she says. “Maybe there’s a reason none of us on this show are new; it’s not our first job, there’s a level of work ethic, knowing how to put the material down at the end of the day, we’re not going to start losing our minds with it. We laugh a lot on set, we take our job seriously, but we don’t take ourselves seriously.”

When Ochoa was younger, all she wanted to do was be in the water. “I wanted to go scuba diving and learn about fish.” She is one of those people who saw Jaws as a kid, and it made her want to get into the water rather than swear it off entirely. Now that she’s got two very different shows on the air, it looks like her ocean dreams on hold for a while, yet she still finds time to work with Earth’s Oceans Foundation, and she’s on the media advisory board of Oceana. She says if she could adapt anything herself, it would be a comic book called “Fathom” from Micahel Turner.

“It’s about a marine biologist, sort of like a female Aquaman superhero,” she says. “It’s that’s material I’ve had my eyes on for a really long time. If I had to pick one role that combined all the things I love, that would be it.”