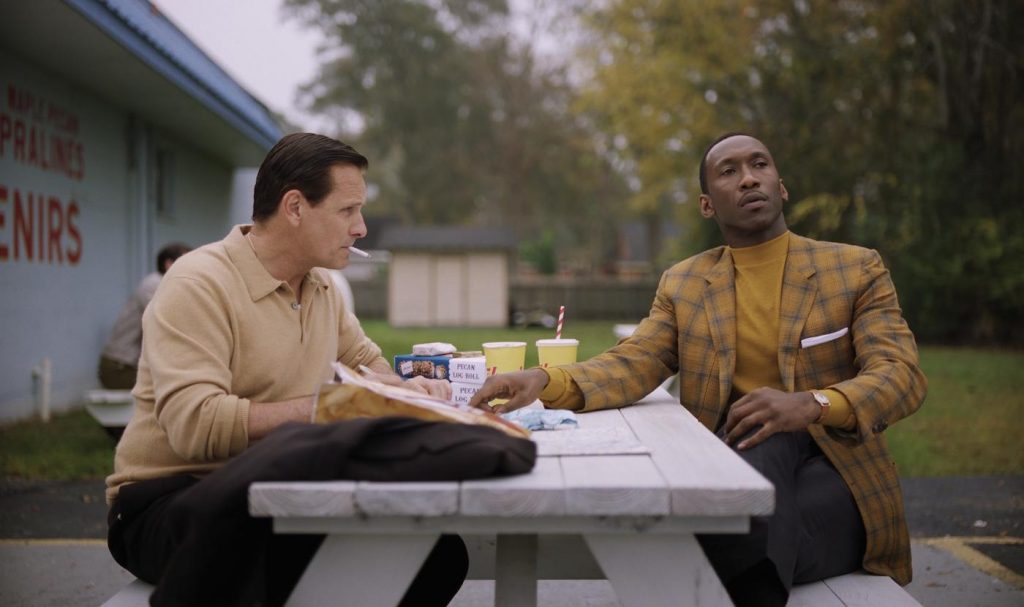 Charming characters in beautiful clothes battle ugly Jim Crow racism in the opposites-attract period piece Green Book. Inspired by a true story, the movie follows sophisticated black pianist Don Shirley (Oscar-winner Mahershala Ali) and his earthy driver/valet/bodyguard Tony Lip (Viggo Mortensen) as they forge a friendship traveling through the segregationist south on a concert tour in 1962. Costume designer Betsy Heimann envisioned Shirley as a man who uses clothes to make a statement. “I wanted Don Shirley to maintain his elegance throughout the entire trip, no matter how he was treated,” she says. “His clothes are kind of a shield, where he’s thinking ‘I don’t care how you feel about black people, look at me. I’m beautifully attired, I’m well educated, I’ve got good taste and you can tell that from a mile away.'”

Director Peter Farrelly early on establishes Shirley as an imperious presence, when he meets seventh-grade drop out Tony, an unemployed nightclub bouncer from the Bronx, for the first time. The conservatory-trained musician wears a cream-white robe as he interviews Tony from the comfort of a throne-like chair. “Don Shirley really did have a throne in his apartment above Carnegie Hall” marvels Heimann. “And I found this picture where he’s wearing this crazy robe. In the photo, it’s a black Dashiki, but I thought ‘He’s not a sorcerer! Wouldn’t it be glorious to have him enrobed like a king?”

Heimann and her team used silk and linen fabric imported from Morocco to craft a custom piece. “We laid on gold braid and silk-screened gold trim in three different widths and sizes toward the bottom. He’s got the finery and the gold and the jewelry that he’s picked up all around the world and at the same time, the Dashiki shows that Don Shirley is in touch with his African roots.”

Heimann, Oscar-nominated for Pulp Fiction and Almost Famous, found inspiration for Shirley’s immaculate collection of tuxedos, suits, and mock turtlenecks by studying the artist’s album covers and researching his peers. “When you look at Don Shirley and Miles Davis and other jazz cats of that era, they were all very sharp dressers,” she says. “Mahershala himself has an amazing eye for clothing, so it was interesting to combine his fashion sense with what was appropriate for the character and the period.”

Case in point: Ali as Shirley begins his journey in a teal-colored mohair silk suit, which Heimann located with the price tag still attached during one of her vintage clothing expeditions. She says, “People ask me, ‘Where did you get these clothes?’ and I’ll be honest with you. I’m either up on a ladder looking through shelves at some rental shop or I have my head in a barrel. There’s a lot of rag picking involved, but if you don’t have a lot of money to spend, then you have to roll your sleeves up and do the time. I have resources. I have vendors. You’d be surprised at the number of rental houses here in L.A. where you can find pieces that still have the original tags on them.”

Contrasted with Don Shirley’s sleek look, Heimann put Tony in white shirts, dark suits, sweaters, and sportswear designed to accentuate the 40 pounds of extra weight Mortensen gained for the role. “I especially remember one scene where I put Tony in this three-button Ban-Lon® sports shirt that I tailored really tight,” Heimann says, “I made everything tight for Viggo. I figured he’d put on all this weight so I’m going to show it off because that’s what we’re saying about this guy. He likes to eat and smoke.”

Working from old family photographs provided by Tony Lip’s son Nick Vallelonga, co-writer of Green Book, Heimann dressed Tony’s wife Dolores, played by Linda Cardellini, as the picture-perfect homemaker. Heimann explains, “When you look at Linda, she’s petite and has such an adorable figure, so I wanted to play that up: ‘Tony’s so big and she’s so tiny.’ I had Linda wear circle skirts with the belt to show off her little waist. I wanted Dolores to be like Donna Reed, but Italian style.”

To reflect changes in season and culture over the course of the road trip, Heimann shifted clothes’ color palette from warm greens, blues, and mustard yellow in early fall to a more bleached-out look when the guys arrive in December at a racist venue in the deep south. “When we got down to the plantation, there wasn’t a strong color in the bunch,” Heimann recalls. “All the women are wearing, pink, faded green, taupe, ice cream-colored, lacy dresses, and the men had white jackets. It’s like the place was lost in time.”