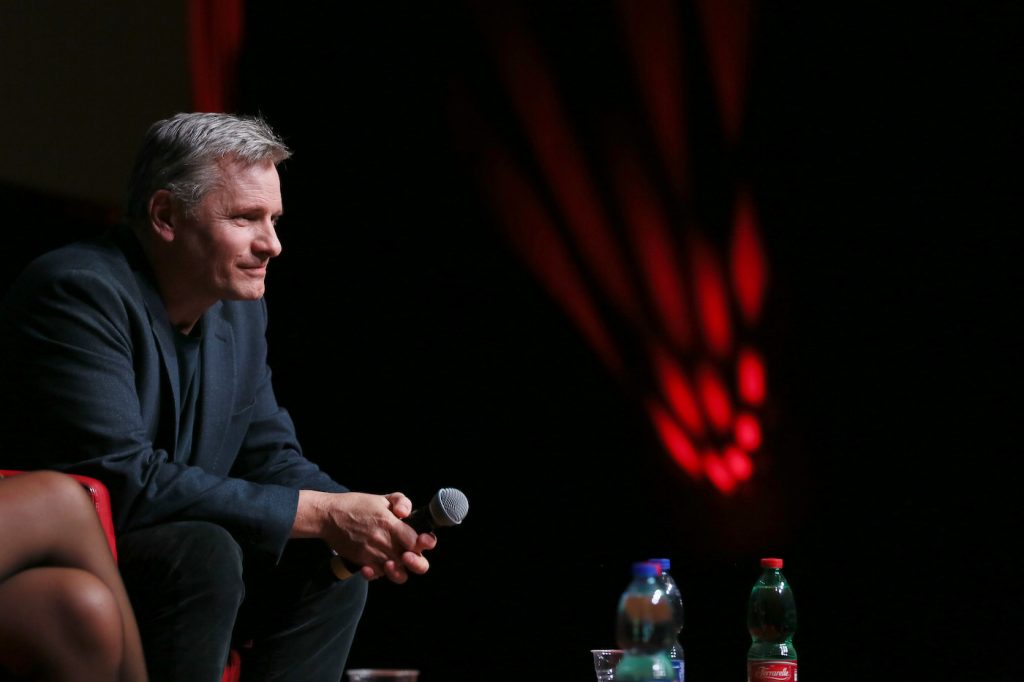 The much-anticipated new release from director and co-screenwriter Peter Farrelly, Green Book, was just given the Audience Award for Best Narrative Film at the Middleburg Film Festival. The film has been received with equal enthusiasm at all its screenings, garnering, among others, the Grolsch People’s Choice Award at the Toronto International Film Festival. The story, which is based on the experiences of the real people portrayed in the film, is about the development of a lifelong friendship between working-class Italian-American Tony Lip (Viggo Mortensen) and erudite piano virtuoso and African-American Doctor Don Shirley (Mahershala Ali), as they travel through the 60s era Jim Crow south, with Lip as Shirley’s driver and “problem-solver” during a concert tour. It is a funny, charming, poignant film, and offered a rare opportunity for Mortensen, who is known for his dramatic work, to show off his comedic skills. The Credits was on-hand at the Middleburg Film Festival to hear Mortensen speak about his experience on the film.

Walk us through how you came to the film…

I was told Pete Farrelly had a script and he wanted me to read it. I’m not known for doing comedy. Certainly, in all my roles I try to find something funny here and there, even if it’s through darkness, but nothing like this. I just wasn’t sure, but Pete said to take a look and asked me call him when I’d read it. I didn’t know what to expect. These people existed, but not too many people knew about them. Probably not many people had heard Don Shirley’s music, and certainly, no one knew who Tony Lip was. I was hooked immediately. It’s got a great structure. There’s a set up of Lip’s whole world, and his family in the Bronx, and then we meet this musical genius, who is very unusual. The audience is already two steps ahead, knowing they’ll be meeting and connecting somehow. Everyone would have to be thinking it’s not going to work. Their worlds are so different. Every once in a while, you get a script that starts off that well, but of course you think at some point it’s going to fall off, or get predictable or overly sentimental, which could definitely happen with this story. It’s really hard to write a great script. So I’m reading it, and laughing out loud, and I’m moved, and surprised at a number of turns in the story, and it just kept getting better and better in directions I didn’t expect.

I thought I knew a lot about this time in our history, with the civil rights era, but there was so much I learned along the way. It’s like a history lesson, an ethics lesson, a lesson about the limitations of first impressions or the dangers of ignorance, which breeds mistrust, even hatred, and violence. There are so many things in this story. It’s such an achievement to have written something like this. I thought ‘if this movie is even half as good as the script, it’s going to be great.’  When I finished reading it, I thought ‘I wish I was Italian-American, because obviously, I’m not right for this character.’ I called Pete and I told him, ‘You have a tremendous, riveting script, and I can’t say too many good things about it. The dialogue, the story, the emotion in it…but I think you can do a lot better than me for the role.’ He told me to read it again, but then I read it probably three or four times, and every time, I felt the same. It’s the same way watching the movie. It makes you laugh, makes you cry, it makes you think, and feel, and takes you in so many directions. I really didn’t want Peter to make the wrong choice with me.

Have you ever felt this way about a script in the past?

I felt the same way about being cast in A Dangerous Method. I was offered Sigmund Freud when he was in his 40s and I thought, ’this is crazy!’ I’d be more right for Carl Jung as a type maybe, but even that..but then I thought the director hadn’t led me astray in the other movies I’d done with him, so I jumped in and had a great time. I thought about that. These guys have a reason for believing in me being able to play this role, even if I have serious doubts. So, I decided I really had nothing to lose in trusting them. It’s just a movie, and it is a great script. Needless to say, I got a lot of help from Tony’s son, Nick Vallelonga, and from Mahershala, and from Pete above all. He has done something extraordinary with this movie. Based on his other work, I don’t know what expectations people are going to have as they go see Green Book, but I think it’s great, and it’s not just preaching to the converted. It’s not just a movie about racism. Hopefully, hoards of people from all different perspectives will see it.  It’s a great way to get people to think about serious things because they’re laughing and enjoying what they see.

It’s a script that isn’t just about one racist changing how he sees the world. It’s way more intelligent than that. It isn’t just about one guy changing. They both have their first impressions turned; first on their head and then turned completely around. Neither of them is the savior; they save each other.