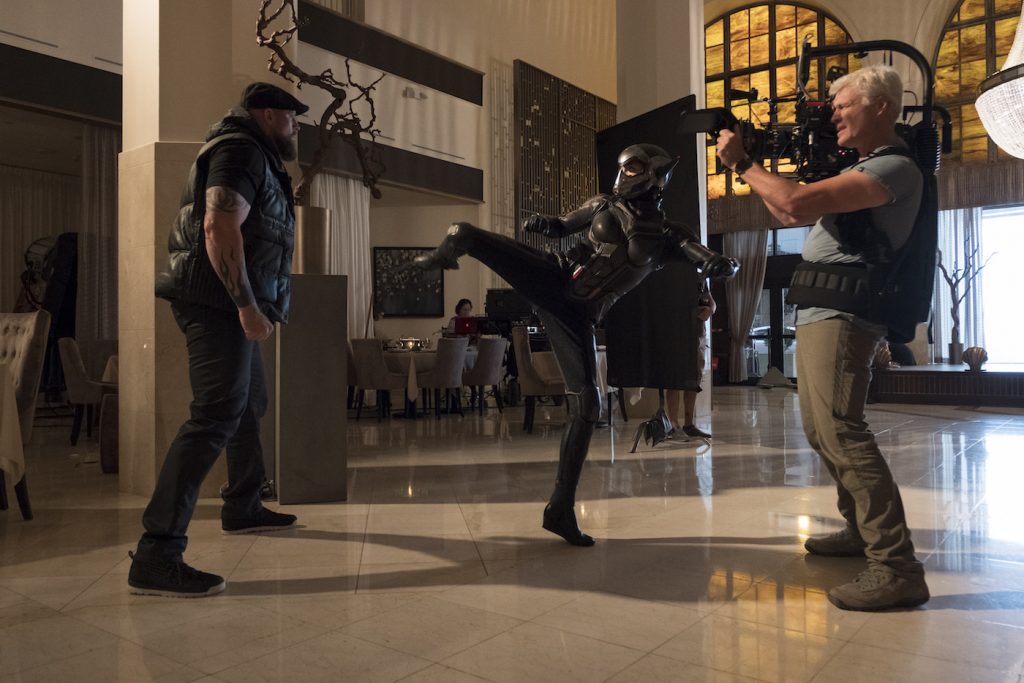 While Brie Larson’s Captain Marvel is understandably a huge focus for fans thrilled that the MCU finally has a female superhero fronting a film, let’s not forget Evangeline Lilly‘s Wasp was the first to get title billing. What’s more, her Hope van Dyne/Wasp proved in Ant-Man and the Wasp to be one of the most exciting new(ish) members of the MCU. Lilly wasn’t only utterly credible as a ferocious fighter in her own right, her character’s poise and lack of pomp was a welcome blast of realness compared to her more grandiose brothers-in-arms (we’re looking at you, Tony Stark). In an exclusive clip from i09, you’ll see the Wasp’s first major fight scene in this behind-the-scenes footage. In this scene, Hope confronts Sonny Burch (Walter Goggins) to get the parts she and her dad Hank Pym (Michael Douglas) need to build their Quantum Tunnel. The scene mostly accomplished the old fashioned way; with some very capable actors performing many of their own stunts, a top notch stunt team, and a nimble camera crew:

Ant-Man and The Wasp was a blast (especially after the colossal and somber Infinity War), and the chemistry between Paul Rudd’s Ant-Man and Lilly’s Wasp was a massive part of its charm. So, too, was getting to see the Wasp sort of steal the movie (fitting for a franchise based on a former criminal), proving that one of Marvel’s most iconic female heroes from the comics has found her place on the big screen. The above clip benefits immensely from Lilly’s stunt chops and director Peyton Reed and his team relying on practical effects and real stunt work to show just how big of a badass the Wasp really is. You’ll be getting a lot more behind-the-scenes footage with the film’s digital home release, which is today, and it’s Blu-ray release on October 16.