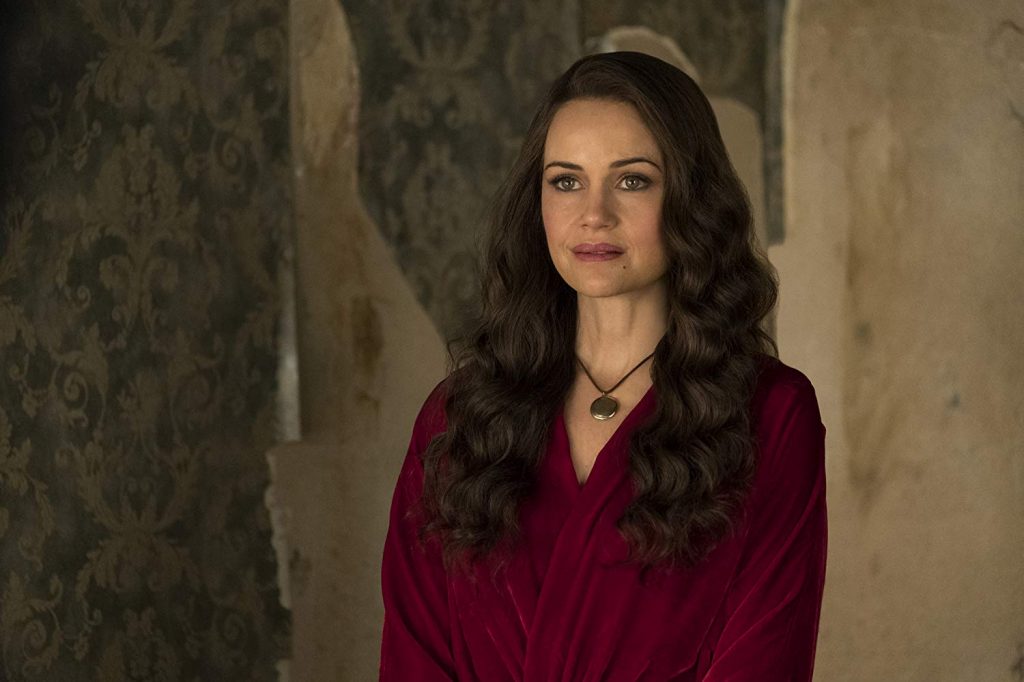 TV’s Halloween hit of the year is undoubtedly The Haunting of Hill House. There are some major chills and surprises, but the addicting aspects of the series are the harrowing revelations that unravel among the Crain family. The unknown horrors that plague them across the years are terrifying but they grow even scarier when the truth is revealed. Not to mention you won’t be able to close your eyes at night without checking for the Tall Man around every corner. Costume designer Lynn Falconer developed a complex and detailed wardrobe for characters, both living and dead, that spans more than 70 years.

“It’s distinctly 1992 and the present, however, there were a lot of references to several time periods,” Falconer explained. “The crew was actually provided with a very rich backstory of the whole family itself. It really informed what I did with the characters.”

The interwoven ghost story is loosely based on Shirley Jackson’s iconic novel. The source material focuses on a single event, whereas the series elaborates on connections between the spirits and the afflicted. The twists are unpredictable and without knowing where the elaborate plot was headed, Falconer began her work. Creator Mike Flanagan worked with the costume team to keep everything straight.

“When I first started the process, we had episodes 1-4. We, in a way, were waiting to see what would happen too. I’m not sure that any of us realized where there would be pitfalls in this kind of timeline where it was unfolding for us and still being written, quite frankly. Because Flanagan is so smart, I had to say to him, ‘Please make sure I’m okay with this. If you write later that something is coming out of a pocket and I didn’t design a pocket, we’re going to be in deep trouble.’”

Of course, they never were. The costumes serve as a through-line, connecting characters across time and relationships. “These costumes travel from episode to episode and they have to make sense,” Falconer said. “It was the most difficult part of the wardrobe design for myself and my team, because the scripts were unfolding as we were shooting, and they were not linear.”

As a launching point, Falconer turned to Jackson’s novel. The main characters have been reshaped for the series but share a similar soul. Siblings Theo and Nell are both characters that appear in the book and maintain ties to the text.

“I drew upon the book in terms of [things like] Theo, in the book, wears the color yellow. I did use some of that on Theo’s wardrobe and Nell has an affinity toward wearing red, so I used that,” Falconer explained. “I am always looking for prints for Olivia’s character for the oleander. If I’m correct, the oleander tree is actually a poisonous tree and it’s alluded to when Nell in the book drives to all of these townships and she gets there and is admiring these poisonous trees. That was my first inclination, but the story is so different in so many ways.”

The show vacillates between the 90s and present day, peeling back the tortured history of the Crain family through every episode. In the earlier setting, the Crain siblings are just children. When we see them in their later adult years, the effects of the supernatural events have a visible effect. Falconer’s designs help us connect the dots between child to adult actor and help illustrate the path their lives have taken.

“If you put the [design] board of the child next to the board of the grown up, it’s the grown-up version,” Falconer said. “You see Shirley was given the Madras plaid. When we were young, the Madras plaid was really prevalent. I didn’t give that to Shirley later, but she did end up wearing plaid. She was the more caring, motherly sibling. It’s hard to put them in all the same color to clue you in. It’s more details and silhouettes.”

Children of the 90s will recognize many of the fashions, but Falconer also infuses the gothic undertones of Jackson’s tale. The somber tones and flowing fabrics turn a family home into a house of horrors. Matriarch Olivia Crain most openly embraces the style. Falconer calls her collaboration with actress Carla Gugino one of the most rewarding experiences of her career.

“[Olivia’s] backstory was that she is this cosmopolitan city girl who is an architect, but she definitely alludes to this sensitivity, a psychic ability,” Falconer described. “She has a bohemian side to her. The Poppy Hill influence is not a mistake. In episode 4, Olivia pulls a scarf out of the box and little Luke puts a bowler hat on his head. I have always known that scarf belonged to Poppy and that was my permission to just go there.”

The time periods may seem perfectly blended, but Falconer revealed the 90s actually serve the story well. The novel was originally penned in 1959 but shifting to a later decade opened up options to channel a gothic feel. Falconer found vintage materials from the 90s that mimicked the ethereal style.

“I spent two weeks at the Western Costume Research Library developing all the time periods for the Hill family as well as the Crain family,” Falconer said. “I spent the most on 1992 and I made sure, even though there is a lot of that Edwardian influence, it actually existed in 1992 as well. I went through J. Crew, People magazine, Vanity Fair catalogs from that time period and I found [Olivia’s] robe. It’s valid. It was there. The robes are little beacons throughout the story. You’ll notice as it plays out, she’s in this solid velvet then she goes into this green that is really the middle of her madness. By the time she has the tea party she is just whisper thin.”

Those robes persist throughout the series and tie the living world to the undead. The haunted halls of Hill House are not for the faint of heart. The Bent Neck Lady is a chilling specter whose history becomes even more disturbing than her appearance. The Tall Man spooked me most of all. He has a dapper yet diabolic aura that will induce nightmares. Falconer detailed how she made each so frightening and revealed some secrets you might have missed.

“The Bent Neck Lady pulls that gown out of Olivia’s drawers. In episode 1 or 2, Olivia is actually wearing the gown in bed when Hugh comes into the bedroom. I established it there as belonging to her. That was actually something I found at the Western Costume collection. They have this one section of just rows and rows of beautiful 1930s gowns. We adapted it so it was a little bit of the blend of the late 80s, early 90s, but underpinnings of the 1930s. That was very valid to what was happening in the early 90s.”

The Tall Man also draws from history. He is an abominable apparition that stays with you long after the credits roll.

“The Coat we designed for William Hill, or the Tall Man, was inspired by the Chesterfield coat,” Falconer explained. “It has a long fashion history and worked the best for that ghost’s demise in the house, and the technical needs of all the manifestations of this ghost. He appears both 10 feet tall and human-sized. We were able to use that coat shape and exaggerate the long lines of the coat so that it could be as scary as possible. That particular ghost, when he succumbed to the house, he’s not all buttoned up. He’s wearing kind of a crappy night shirt underneath this long coat and pants. The bowler hat was also very significant. That bowler hat lives through the history of the whole family.”

To create those inhuman manifestations, the actors had to film various stunts like hanging from wires. Falconer designed duplicates of the outfits to execute those scenes. There were also duplicates for other horror sequences, like being bloodied or torn. Working with tailor Oksana Shore, Falconer and her team turned around countless duplicates on a tight timeline.

“This job was probably one of the most difficult jobs I have ever been on,” Falconer said. “One of the reasons is not only the timeline that goes back and forth but the number of duplicates. The Bent Neck Lady, for instance, has not only a peach version but a dark version. We had a gray one for the actress and a gray one for her stand in. Then the peach for all the stunts where we had to cut all the holes and yes, we did them all from the correct fabric.”

Of all of the costumes that Falconer has designed, one decade stands out as being perfect for horror.

“For this particular project, the 30s are my new love. The 30s are the scariest for me. You could go to a department store and still find beautiful natural fabrics because they didn’t have what they had in the 70s. It’s going to be tweed and silk and chiffon and tulle and leaned toward a spookier silhouette.”

The Haunting of Hill House is streaming on Netflix now.