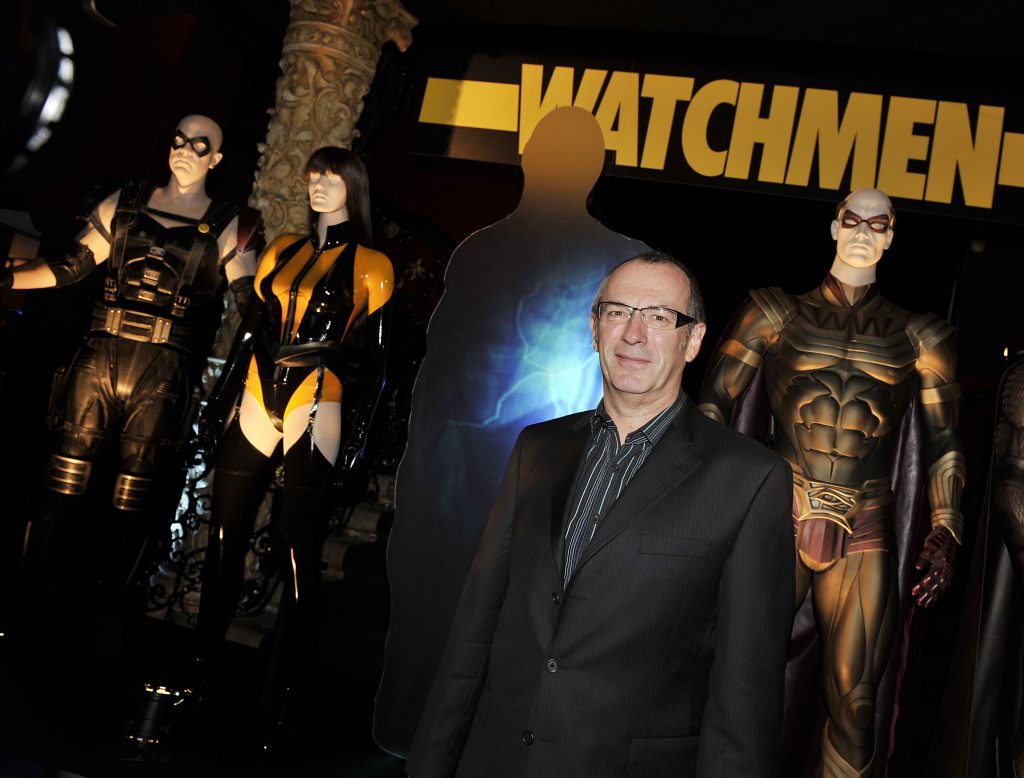 Comic artist Dave Gibbons is intimately acquainted with the outlaw superheroes of the Watchmen, having inked the characters penned by Alan Moore more than 30 years ago. However, there are still parts of the story that can amaze even him. HBO will be debuting a TV series of the cult classic next year starring Jeremy Irons (Justice League), Regina King (The Leftovers), Don Johnson (Miami Vice), and Tim Blake Nelson (The Ballad of Buster Scruggs). After getting an early look at production, Gibbons offers his happy face stamp of approval.

“I’ve read the pilot episode. It blew me away and came at a very unexpected angle,” Gibbons told fans at the kickoff of New York Comic Con. “It felt very fresh. I am in reasonably close contact with Damon Lindelof who is absolutely a #1 fan.”

Lindelof announced his intentions earlier this year to take the beloved series in a new direction via a lengthy note to fans. Rather than a retelling of the original DC comics series, the show will explore the decidedly new territory, Gibbons assured fans. He was enthusiastic about the original thread and enjoyed seeing his creation take on a new life.

“With the graphic novel, we said everything we had to say about those characters at that time. I’d rather see fresh approaches and new approaches. We always conceived of the graphic novel as having a beginning middle and end. Things that retread that ground rather than expand it, it doesn’t attempt to do any of those things. It felt new to me. It felt up to date.”

Gibbons skipped the specifics of which characters or conflicts might appear on the series. However, the new show will not be completely foreign. The highly stylized tone of the comics will be recognizable on screen. Gibbons confirmed that the adaptation will capture the nature of the original story.

Watchmen was first adapted for the screen in Zack Snyder’s popular 2009 feature film. Although the comics are more than three decades old, Gibbons said the timing for a television take was ideal. With superhero adaptations in a golden age, Watchmen is likely to reach a broader audience than it might have in the 1980s. Fan knowledge is more pervasive and the writers will be free to stretch the narrative even further.

“Alan and I always felt a 12 or 13-part TV series would have been a cool way to dramatize it in a live action story. In a way, a TV series is an extension of the serial nature of comics. If we had a TV series in the 80s it would have been a cult and had a small audience at the time. Now everybody gets superheroes. When it was written, it was weird, geeky, and out there. Now, we didn’t have to introduce it to the audience. Everybody gets the notion of superheroes and is aware of the conventions.”

If you were hoping to see the original comic series play out on screen, Gibbons has some advice for you. “I think it was Alan Ball who said, ‘You shouldn’t give people what they want. Give them what they need.’ There’s a literal way to do it where one comic is an episode, but this is certainly not a way I expected would be done.”

Watchmen premieres on HBO in 2019.