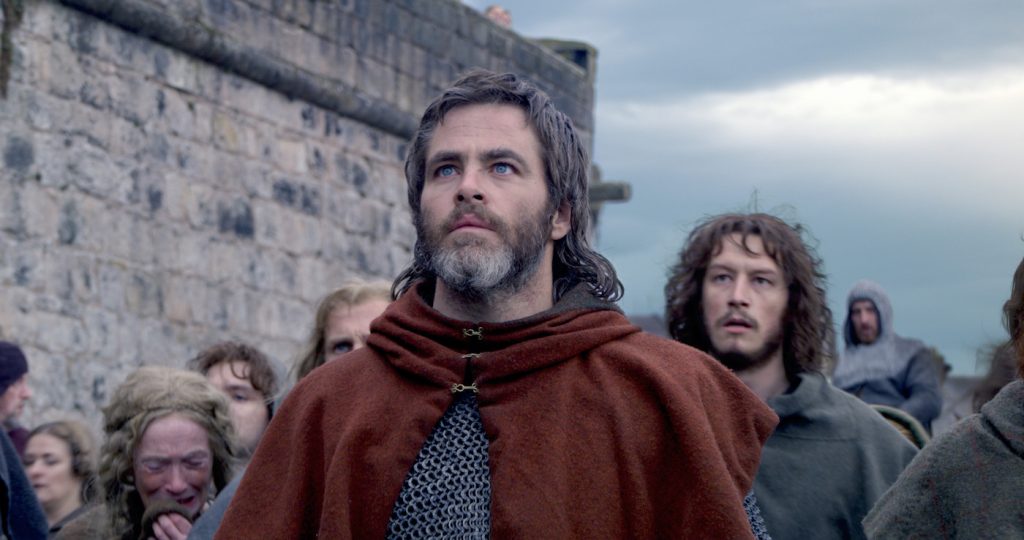 Muddy, bloody and massive in scope and scale, David Mackenzie’s Outlaw King might be Netflix’s most ambitious, sprawling release to date. The historical epic stars Chris Pine as the Robert the Bruce, the 14th-century Scottish noble whose legitimate claim to the throne was contested by fellow Scot Lord John Comyn (Callan Mulvey) and ultimately nullified by the English King Edward I (Game of Thrones’ Stephen Dillane). The story begins with Robert, Comyn and the rest of the rebellious Scots pledging fealty to King Edward, ending an 8-year bloody insurrection in which the militarily superior English exhausted and ultimately broke the Scottish rebellion. The Scots aren’t happy about the arrangement, but after enormous losses and the counsel of Robert’s father, Sir Robert VI (played by Braveheart’s James Cosmo, not the only connection to the 1995 film), they feel they have no choice.

Comparisons to Mel Gibson’s Braveheart are not only inevitable, but they’re also necessary and intentional. The events depicted in Gibson’s film not only deal with many of the same players, but they also serve as a prequel of sorts to Mackenzie’s story. The good news is Mackenzie’s film not only holds up to the comparison, but you could also argue it’s the stronger, more nuanced film. Wallace is mentioned early on in Outlaw King, which could have been enough as a nod towards Gibson’s film and the infamous knight who became a leading figure in the first war for Scottish independence, but Mackenzie gives us a deliciously different version of the man.

In Braveheart, Wallace is depicted as a kind of Scottish superhero, one who combines intellect (he can speak Latin, French, and many other languages, to his paramour’s delight!), an almost supernatural toughness, poise, military genius, fearlessness, and courage. He makes a lot of big speeches on horseback and ends the film, even in the midst of having his limbs broken on the rack, rebelling in spirit against the English by refusing to submit to the English king. The last word he screams is “freedom!”

In Outlaw King, we meet Wallace early on in what one suspects is a closer approximation of the real man. To further subdue the Scottish urge for freedom, King Edward I bequeaths his goddaughter, Elizabeth de Burgh (Lady MacBeth‘s Florence Pugh) to Robert the Bruce for marriage. The day after the wedding, Edward’s psychopathic son, the Prince of Wales (Billy Howle, giving Game of Thrones’ lunatic Ramsay Bolton a run for his money) takes Robert and a party out in the Scottish woods for the usual day after hunt. Only they’re not hunting pheasants—they’re going after William Wallace. Robert ends up on his back, surrounded by a few skinny, stinking, bearded men with their swords drawn, the most bedraggled and wild-eyed of the bunch none other than the legendary Wallace. This version of Wallace looks nothing like Gibson’s blue-eyed, blue-painted warrior-poet, but rather like a man possibly dying of hunger and thirst in the woods and very close to insane. He’s no doubt brave, but he’s also feral. His fate directly ties into Robert’s.

The British capture Wallace (off-screen), draw and quarter him (which was the penultimate scene in Braveheart) and peg his limbs and severed head to posts throughout the Scottish countryside, to prove once and for all they are subjects of the English crown. It doesn’t work. The mutilation and murder of Wallace enflame the Scots—and his death presents Robert with a fact he’d known all along—there could be no peace with the occupying English crown. There could only be another bloody rebellion and, ultimately, either Scottish independence or total annihilation.

It’s a testament to Mackenzie’s skill as a filmmaker and another sympathetic performance by Pine that Outlaw King works as well as it does despite covering familiar territory. (It’s also worth noting Pine’s Scottish accent is leagues better than Gibson’s was.) The story of Robert the Bruce’s rebellion against the English crown is truly epic, and you might find yourself duly impressed with how many skirmishes Mackenzie can stage in a single, two hour and 17-minute film. Mackenzie’s got some aces up his sleeve, including production designer Donald Graham Burt and cinematographer Barry Ackroyd, who both made the most of on-location shooting throughout Scotland, including the Isle of Skye, the Scottish highlands, Doune Castle and Linlithgow Palace.

Pinpoint historical accuracy aside, Robert the Bruce’s long, brutal war against the English was a feat of endurance, lasting some 28-years until Scotland was free. Mackenzie’s film covers the time from Wallace’s death to the famous battle on Loudoun Hill, in which Robert and his 500 men faced Edward II (the Prince of Wales, now king after his father’s death)’s army of some 3,000 soldiers. Without spoiling the ending (even though you know how it ends), it’s the specifics of the battle, of Robert’s cunning, and of the men you’ve come to know throughout Mackenzie’s film finally getting to face the English on an open field that make the ride worth it. These include Aaron Taylor-Johnson’s half-crazed, savage-but-noble James Douglas, one of Robert’s most trusted and crucial allies, and Sam Spruell’s Valence, a fearsome English knight who, along with the radiantly loathsome Edward II, has no problem murdering women and children to keep the English in power. Mackenzie’s skill, along with his cast and his crew, make the final fight worth savoring. Robert the Bruce was a small but essential part of Braveheart, a kind of foppish noble who is forced to do the right thing after William Wallace’s mythic struggle for freedom. In Outlaw King, we get to see a very different Robert the Bruce, a more down to earth historical figure forced to make impossible decisions and prevail, not because he’s a Scottish superhero, but rather because he happened to be the right man for the job.