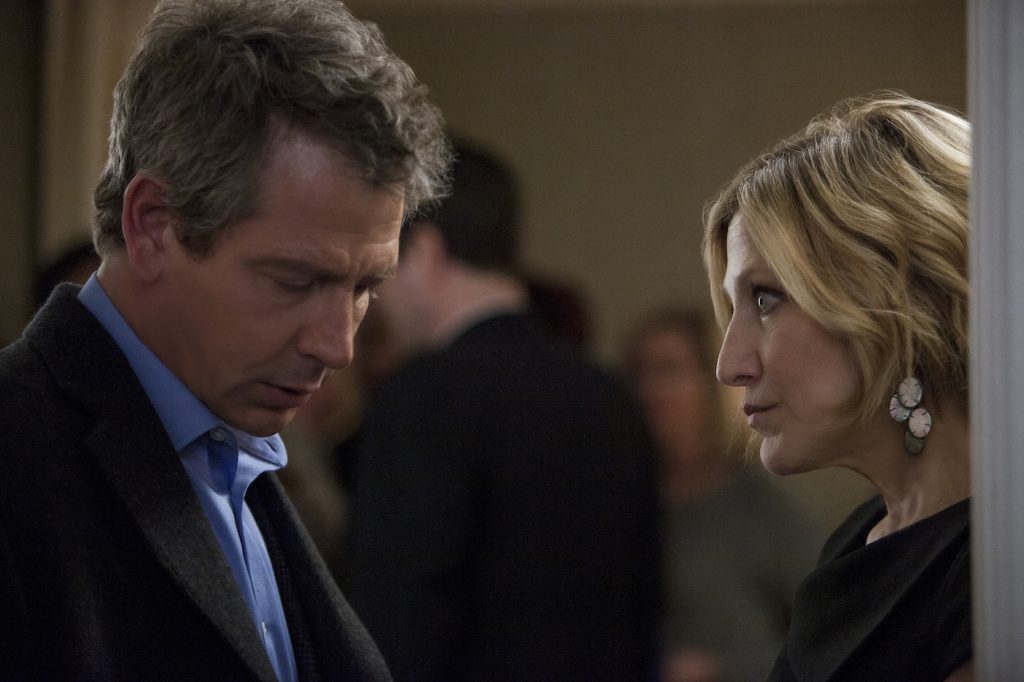 Nicole Holofcener on Adapting & Helming The Land of Steady Habits

She doesn’t really rehearse, shoots a limited number of takes and prefers not to watch dailies. While such an approach to filmmaking may seem a bit impractical to some, for writer/director Nicole Holofcener, it defines a decisiveness that has enabled her to produce a body of highly realistic and instantly relatable work.

In her past films — Walking and Talking, Lovely and Amazing, Friends With Money, Please Give and Enough Said — Holofcener has brought a series of authentic characters and their poignant storylines, often infused with humor, to the screen. Her movies have typically focused on women, but in her latest, The Land of Steady Habits, streaming now on Netflix and adapted from Ted Thompson’s novel of the same name, she has switched gears. The plot follows Anders Hill (Ben Mendelsohn) as he comes to terms with who he is as a person, father, and friend, after leaving his wife and lucrative finance career. Rounding out the cast are Edie Falco, Charlie Tahan, and Connie Britton.

Holofcener also has a number of TV-directing credits to her name, including Sex and the City and Gilmore Girls. Up next is her screenplay adaptation of Lee Israel’s memoir Can You Ever Forgive Me?; the film will be released next month.

The Credits recently chatted with Holofcener, just back from a press tour for Steady Habits, about casting her films, working with Netflix and directing a turtle. Edited interview excerpts follow.

What about The Land of Steady Habits resonated with you? Did you know you wanted to adapt it for film as soon as you finished the book, or perhaps while you were reading it?

I can’t remember, it was so long ago. I think I read it and said, yeah, maybe I can make this. I’m generally cautious about jumping into things. I’ve jumped into things and then changed my mind because I decided too quickly. But this, I really loved a lot of the scenes, I thought it was really well-written, I cared about the characters, I loved that it went to a dark place that I don’t ordinarily go myself. You know I’m not that interested in adapting a book that seems like one of my movies in a way, because I could write that. This movie has something very different, the whole drug addiction and a male lead and some really good funny stuff that I thought would be fun to make.

Did you have any actors in mind while you were reading the book, especially for the role of Anders since your films have revolved around women?

I don’t think I did, but I do know that when I finished it, I knew I wanted Ben Mendelsohn, so it’s possible that I was thinking about him.

I first saw him in Bloodline, and he was so unpredictable in that role. You could not take your eyes off him when he was on screen, which I think aligns well with Anders, because he’s trying to find his footing and you don’t really know what direction he’s going to go in.

Well, he’s a complicated guy, and I feel like Ben plays complicated really well in the way you’re describing. Is he a good guy, is he a bad guy? Is he trustworthy, is he not? And, most importantly, what you just said is you can’t take your eyes off him. That’s how I felt about him. I have felt that way about Catherine Keener. I couldn’t take my eyes off her. And then with Julia Louis-Dreyfus, it’s like they’re two people I don’t get tired of looking at. And I feel Ben has a real softness to him despite his hardness, or along with his hardness, and I wanted Anders to have that. I wanted him to reveal himself to be a human being, not just an idiot, a dangerous one at that.

Did any of the cast surprise you in particular with what they brought to the film?

Probably everyone to some degree. I cast them because I knew they were right and could do it. But working with outstanding actors surprises me all the time. They say things in a way that you don’t at all expect, or they give you a million variations or even a scene that I thought was going to be straightforward and dull turns out to be moving, and that’s the actor.

Did you have to do much directing of the turtle that plays a role in the movie?

[Laughs] The only directing we had to do was trying to coax it in the fish tank at the end. You know, go to the left, go to the left! The whole crew got involved, of course, and everyone’s rooting for the turtle to go in the right direction. Short of that, he really just had to sit there, and they’re good at that, turtles.

I read that this shoot was 26 days, the longest for you, yet you still wanted more time. What was it about this project that warranted this feeling?

I always feel like I could use a few more days, for sure. And this schedule started out at, I think, 32 days, and I thought wow, I’ve hit the big time! And then it just kept getting shorter and shorter with scheduling and money and actors’ schedules, things like that. You know, I always made my day, I didn’t have to push anything. But the Christmas dinner scene, that scene could have used another day. I had one day to do it in. I think it works well but I think it would have been even better, and I would have had a lot more choices in cutting it if I had more time.

How was your experience working with Netflix? Was it going to be at Netflix from the start? How did the film get there?

It was actually at a different place for a theatrical release, and casting just became too difficult to agree on. It kind of became a stalemate of who they wanted, who I wanted, the timing of things. And then they said, ‘Go ahead, make it somewhere else if you can, good luck.’ And then Netflix said, ‘We’ll take it, and we’ll make it for this budget, and you can put whoever you want in it.’ It was a no-brainer.

That’s the dream for every filmmaker, right?

Yeah, it is for me. I mean, preferably also it would have a theatrical release, but it was not a hard decision to make. I don’t know if anybody else would have made a movie with this cast. I would like to think they would, but it found its right home.

What do you want the audience to take away from this film?

I want people to be emotionally moved after the movie and let the story touch them in some way, remind them of their humanity or their limitations or who they love and what’s important to them, but not in a cerebral way. I’d rather it should be like a punch in the gut. And of course, I want them to cry.

You’ve done six films over 20 years. I know you’ve also directed a lot of television, but is this timeframe deliberate on your part to allow you to step away and breathe a little bit to develop your stories?

It’s not on purpose; it’s just how it’s gone. I don’t have a drawerful of ideas. If I’m writing something for me to direct, I just do one at a time. I can’t do more than one at a time, so I’m really choosy, and I have a family, and I enjoy life, and I’m not a workaholic. And then before you know it, five years have gone by, and people are asking me, ‘What happened to you?’ But I’m here, I swear! I guess it’s just my pace.

You have another adaptation coming up with Can You Ever Forgive Me? How do you find the task of adapting someone else’s story versus writing original pieces?

I find it easier than writing my original pieces because it’s pretty much written out for you. Unless I took on something that was completely thoughtless and wandering. But both of these books had real stories to tell, and I used a lot straight from the book. There are so many options when you’re adapting a novel. I had to pick, I had to choose, and I think I chose well.

From a writing perspective, I want the characters to sound like who they are and as real as possible, not be schmaltzy or didactic or pedantic, like I’m not trying to teach anybody a lesson. And without trying, I make things funny. I think it’s just the way I am like, even in bad times, I can still think of something funny. And then when I’m directing, casting is the absolute most important thing. And collaborating, having the right collaborators do their jobs so that I can do mine. And I like to work with nice people and have a good experience shooting the movie.

Well, that’s a great segue because I read your list for filmmaking in MovieMaker and what struck me is the value you hold for everyone in your cast and crew when you’re on set. How does your first day on set typically go?

It’s so fun. I generally can’t believe that it’s happening. I’m really happy, nervous, definitely nervous, but happy. It usually goes well. You know, certain times I wish I wasn’t shooting emotional scenes the first day, but that sometimes happens. I’m just really happy, and I’m really happy everybody’s there. I hope I let people know that I’m a nice person. While I do have boundaries like I don’t want notes from every person on the set, I feel I’m an open person and friendly, and I appreciate them. Honestly, I don’t understand how directors behave. I think it’s really abominable.

Yeah! I think it’s disgusting and I don’t know why directors think that they’re better than everybody else. Nobody should treat anybody the way I hear some of these guys treat their crew. I mean I get mad sometimes, I’m not an angel. I get frustrated and mad, but like a normal person, not like a maniac.