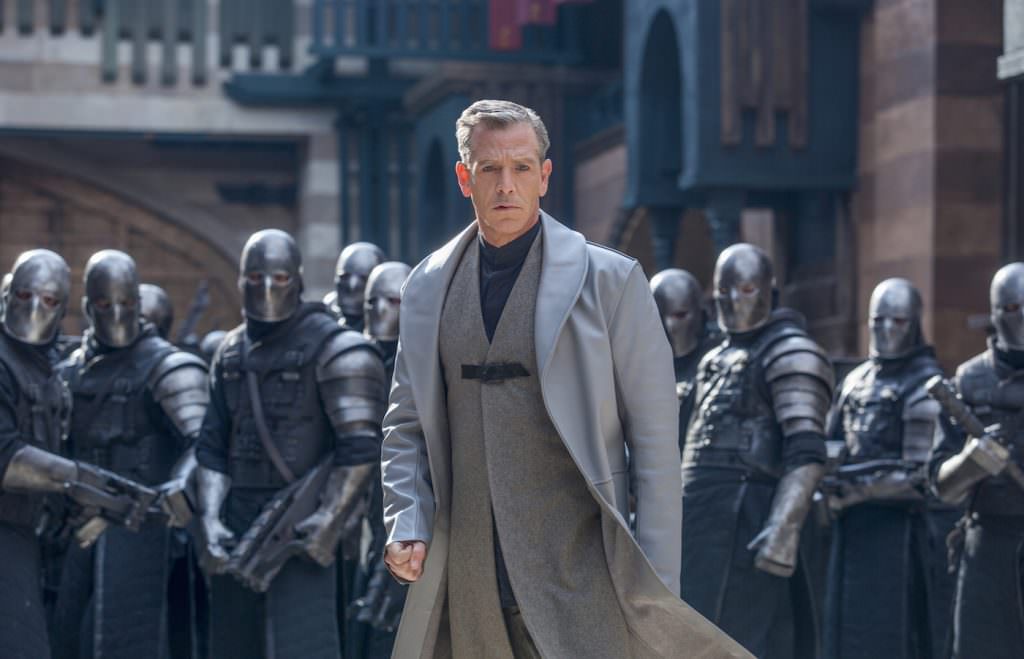 There aren’t many actors around capable of playing a villain so transfixing and yet so damn bad you want them to be in every scene and get their comeuppance immediately. Ben Mendelsohn is one of those actors. After making his name playing the almost supernaturally twisted Andrew ‘Pope’ Cody in David Michôd’s vicious Australian crime drama Animal Kingdom, Mendelsohn has been on Hollywood’s shortlist as one of the best actors in the world at being bad. (Not for nothing, the man can also play decent, or anything else for the matter, as he proved last year in the role of the decidedly good King George VI in the excellent Darkest Hour). Mendelsohn was absolutely riveting in Netflix’s Bloodline as Danny Rayburn, the wounded, wily, ruinous member of a Florida Keys power family. In Rogue One: A Star Wars Story, his Empire executive Orson Krennic was all seething, frustrated ambition. And now, in  director Otto Bathurst’s Robin Hood, Menhelsohn stars as the Sheriff of Nottingham, the scourge of Robin Hood and the peasants he hopes to help.

We’ve now got our first look at the film, and Mendelsohn’s Sheriff stands out, looking equal parts regal and ruthless. Robin Hood is a revisionist take on the iconic folk story, and stars Kingsman lead Taron Egerton as the heroic English outlaw, with Jamie Foxx playing Little John, Jamie Dornan as Will Scarlett, Eve Hewson as Maid Marian, and Mendelsohn in yet another role he seems born to play, Sheriff of Nottingham. In Bathurst, who has directed three episodes of Peaky Blinders, they have someone who knows his way around a period piece that’s imbued with all the grit and verve of a modern crime drama.

Bathurst told Entertainment Weekly earlier this year that his vision of Robin Hood was of a legend much larger than a noble thief:

“You don’t become a legend for 800 years if you’ve just stolen a few bags of money from rich people to give to the poor. In my mind, Robin Hood was this sort of seriously militarized anarchist revolutionary, a freedom thinker and a truth seeker. And the more I got into the story, it just became startling how utterly relevant it is to what’s going on in society now.”

In fact, Robin Hood will begin unlike any version you’ve ever seen, with a military operation that feels more akin to a war movie than a medieval tale. Egerton said this to EW:

“I was approached not long after the first Kingsman movie had come out, and my initial response, to be totally honest, was ‘Why?’ [But] Otto told me he wanted to do something entirely revisionist, something that can’t be tied down to a medieval universe. The first act of the movie, these scenes crusading in Syria, were written like something from The Hurt Locker. It was fantastic, and that was enough to convince me.”

Robin Hood by way of The Hurt Locker? Yeah, we can see why Egerton was intrigued. With a cast this good, and a director in Bathurst who seems eager to take some big chances, Robin Hood is going to be an interesting one to track. The film opens on September 21, 2018.