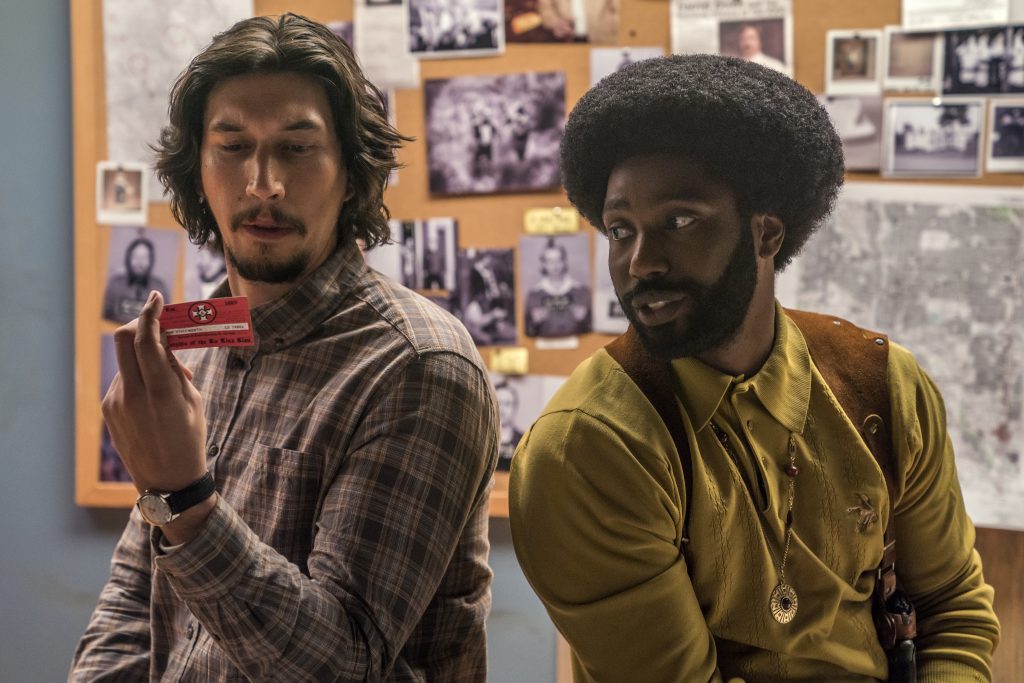 How BlacKkKlansman‘s Production Designer Used the Power Dynamics of Race

BlacKkKlansman is a story of high stakes pushed to the absolute limit. Based on a remarkable true story, Ron Stallworth (John David Washington) was the first African American officer on the Colorado Springs police force. A tense undertaking in itself, Stallworth was not content with breaking barriers. He capitalized on the opportunity and initiated a dangerous undercover operation to infiltrate the KKK, stunning even his colleagues. Production designer Curt Beech tackled these complex dynamics in incredibly imaginative ways that layer meaning throughout the design in subtle, often subliminal ways.

“Conceptually, the layout of the film works like this. Ron is enlightened and progressive and hip and much cooler than everyone around him, and he is moving forward in the world,” Beech explained. “Felix (Jasper Pääkkönen), by contrast, is the ignorant man in a world that is moving forward without him. His look was very different than Ron’s.”

Beech and his team perceived Klan member Felix Kendrickson’s racist convictions were indicative of an antiquated lifestyle. His environment reflected a rejection of progress in every aspect of life as Stallworth blazed ahead. The contrast on screen is striking.

“Felix’s house, we wanted to show him as backward thinking,” Beech said. “Visually, that meant a 50s tract house that is dated. The backstory might’ve been it was his parents’ house or his wife’s parents’ house, and they bought it and are living in it now. Ron’s place is hip and cool, and very of the moment, like he is, he’s moving forward.”

Kendrickson’s basement-based Klan activities may sound meager, but Beech took care to highlight the chilling reality of their impact. The Klan held highly organized meetings designed for maximum outreach. The threat could not be dismissed.

“They’re becoming emboldened, and the basement of Felix’s house is more of an office than a room where they met,” Beech explained. “It’s a place to disseminate information. There’s a desk, and a phone, and a mimeograph machine, lots of leaflets. They don’t have computers, but they’re doing everything that they can to get the word out.”

Posing as a member of the KKK was an enormous risk compounded by workplace friction. Although the police force was taking steps to catch up with civil rights, the environment was far from welcoming.

Arguably Beech’s most inspired contribution to the film was the design of the precinct. A standout moment that sets the tone for the obstacles Stallworth faced was made possible only by the layout Beech conceived. The trailer features the scene where Stallworth first calls David Duke (Topher Grace) to the surprise of his colleagues. As Beech designed it, the intelligence office served as a physical representation of Stallworth’s status.

“It’s a subtle thing, and I don’t know if anyone will catch it, but Ron’s desk is smaller than everyone else’s,” Beech revealed. “And everyone in the room is facing away from him. No one is looking at him. He’s in the corner, and he’s looking at everyone’s back. That was by design, and I played with a couple of different ground plans and realized we should reduce him. Give him a physically reduced role. And that is what he was up against, physically. It just compounds his problem and his challenges, and it helps the actors too because it’s another obstacle for them to deal with.”

Set in 1978, Beech had to be meticulous about recreating the bygone era. BlacKkKlansman filmed concurrently with HBO’s The Deuce and Scorcese’s upcoming Hoffa picture, The Irishman, which meant the team was competing for resources. Rental houses had more limited 70s stock, and Beech had to be creative.

“We had to get rid of the parking meters and the streetlights that have LEDs,” Beech explained. “The walk signs are different now. They’re LED in most municipalities, and you definitely have to do your research. The signage is a little different as well. They didn’t have computers to lay out signage back then. All signage was done by hand.”

New York is home to so many police procedural shows that precincts are hard to come by. The crew built the office set that also gave the production refuge and options for shooting to avoid rain delays. In addition to weather patterns, exterior locations come with their own challenges and considerations.

“It’s a fight to get the look right when you’re doing big exteriors and especially downtowns,” Beech said. “And then there’s vehicles. Vehicles are another really helpful tool when you’re doing an exterior to sell the period. You have to be careful because the picture car people will bring you a car that is in really bad shape and theoretically came out that year in the story. It’s a vintage car, but it would be brand new. And if it’s not brand new, it doesn’t make any sense. The car has a backstory too.”

The production team escaped NYC to find a location that could stand in for 1970s Colorado Springs. The crew filmed the Kendrickson basement at a family home in Ossining, New York. The structure of the house fit the period, but details still required retrofitting.

“This is pre-consumer culture at this period,” Beech noted. “This was pre-big-box. People didn’t have a lot of stuff. Things were precious to people, and there were family photos and things and knickknacks that were bought on trips. Things had more meaning and furniture was handed down. Things were much more used because they had been around in the family for a longer period of time. I really tried hard to dial back that thing that filmmakers often do when every wall has to be chock-full of things to look at.”

Accounting for the complex relationships in the film along with the period was an intricate balancing act. Designing the sets required extensive research and creative application. The result is a really comprehensive portrayal of Stallworth’s work. Beech insists, however, that the answers are all there if you know where to look.

“If you’re paying attention and if you’re reading closely enough and if the script is good enough, all the answers are there in the script. It’s just a matter of extrapolating those ideas and giving a visual component to them.”

While fascinating, Beech reminds us that Stallworth’s story carries far more weight than entertainment value. BlacKkKlansman is a harrowing look at hate and how it permeates society. Stallworth took a courageous stand to cut down racism at its root.

“It’s very easy to write [the KKK] off as a bunch of rednecks in a back room, burning crosses on the weekend, but it’s much more than that,” Beech said. “They had a leader who shortly after was going to run for office, and win. David Duke was no joke. He had a lot of people’s ears, and that’s why it’s such an important film.”