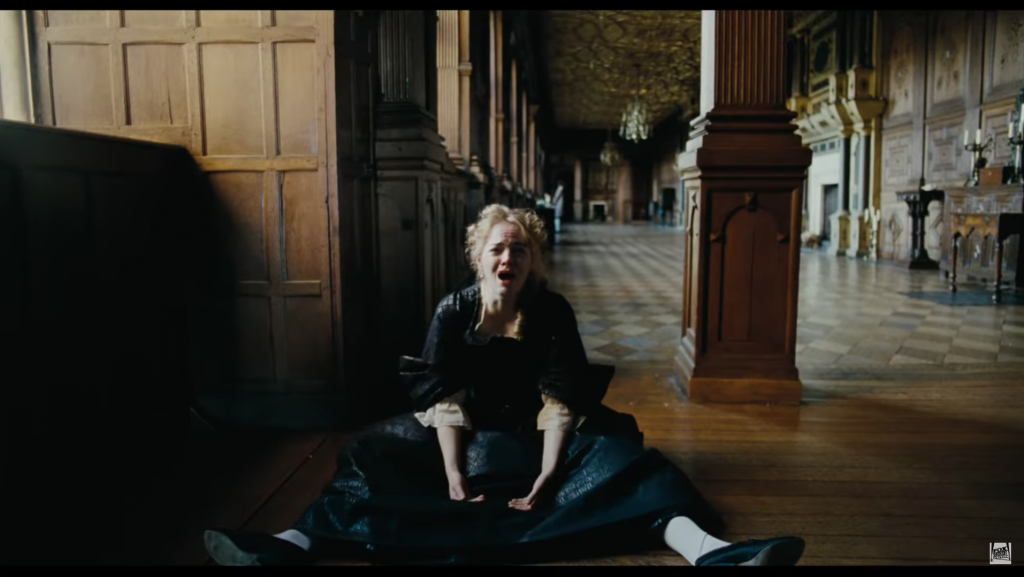 Forget the Mad King of Game of Thrones and The Crown’s stalwart Elizabeth II. There’s new royalty in town, and she’s losing her mind and having a splendid time doing it in the first teaser trailer for The Favourite.

During one of the numerous wars between England and France, Olivia Colman plays Queen Anne, an unstable matriarch whose court looks as insane as she may be turning. Her world, as depicted by The Lobster and The Killing of a Sacred Deer director Yorgos Lanthimos, may be muddy and difficult, but the lavish lifestyle the English throne offers provides her with ample distractions. Perhaps the best distraction is Emma Stone’s Abigail, who arrives in the court as a servant and shakes up its power dynamics. Rachel Weisz, who starred alongside Colin Farrell in The Lobster, teams up with Lanthimos yet again in this period piece that promises to be as outlandish and grotesque as the director’s other indie spectacles.

This is the first footage we’ve seen of Lanthimos’ new project, but it’s enough to convince us that this a must-see. In just over a minute, we see women falling in the mud, shooting objects and perhaps each other, insulting each other, racing ducks, and throwing tomatoes at some unlucky naked person. And more on top of all that.

“Sometimes a lady likes to have some fun,” Weisz’ Lady Sarah says. And it looks they’ll be having a lot of it.

Check out the film’s official synopsis:

Early 18th century. England is at war with the French. Nevertheless, duck racing and pineapple eating are thriving. A frail Queen Anne (Olivia Colman) occupies the throne and her close friend Lady Sarah (Rachel Weisz) governs the country in her stead while tending to Anne’s ill health and mercurial temper. When a new servant Abigail (Emma Stone) arrives, her charm endears her to Sarah. Sarah takes Abigail under her wing and Abigail sees a chance at a return to her aristocratic roots. As the politics of war become quite time consuming for Sarah, Abigail steps into the breach to fill in as the Queen’s companion. Their burgeoning friendship gives her a chance to fulfil her ambitions and she will not let woman, man, politics or rabbit stand in her way.

The Favourite dances into theaters November 23.

Featured Image: Emma Stone in The Favourite via Fox Searchlight