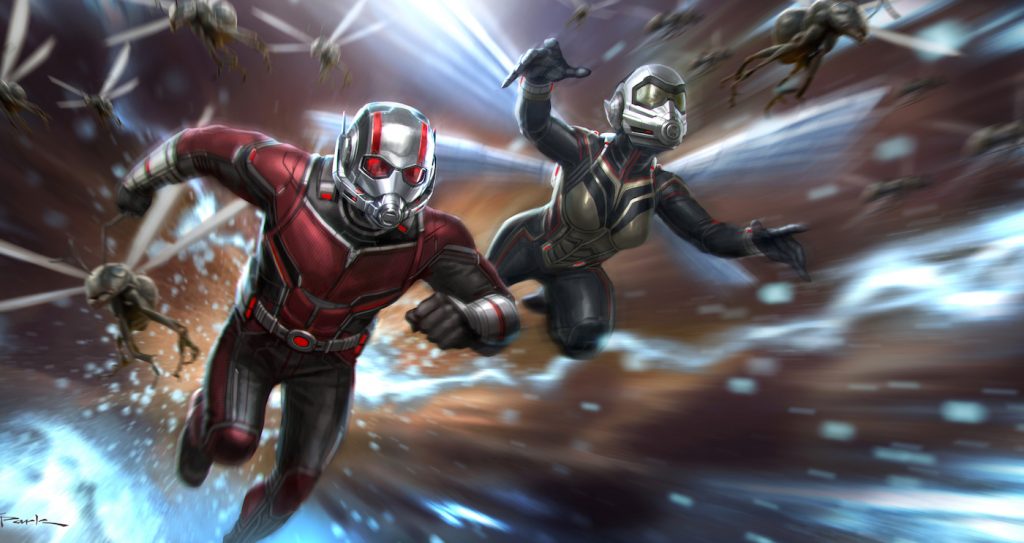 British costume designer Louise Frogley spent the first 35 years of her career focused on Steven Soderbergh and George Clooney movies like Traffic and Good Night, and Good Luck. In 2013 she got her first taste of the Marvel Cinematic Universe via Iron Man 3, followed by the re-booted Spider-Man: Homecoming. Now she’s taken on the skin-tight couture featured in Ant-Man and The Wasp. “When you design costumes for a Marvel movie It’s very technical, really,” she explains. “They conceptualize everything and then people like me have to make the costumes come alive.”

In two previous Marvel movies, Paul Rudd’s Ant-Man character wore a vintage-looking outfit akin to a 1960’s-era motorcycle suit. This time around, Frogley modernized the costume. “We wanted to take the sleekness of the look up a notch,” she says. Raised printing, rubber tubing and laser-cut “four way stretch” fabric imported from France helped sharpen Ant-Man’s fashion sense. “We used different shadings, colors and shaping with a light body [form] that goes underneath the suit to emphasize certain muscles. It’s a series of tricks, but they don’t work unless you have an actor who’s already in great shape and Paul Rudd is very fit.”

Evangeline Lilly‘s Wasp costume, based on drawings by concept artist Andy Park, required a four-month period of research and development before filmmakers arrived at a satisfactory result. Frogley says “We tested 30 different shapes, which was incredibly time consuming, but the costume had to look absolutely perfect, like it just miraculously came like that. If we hadn’t done all that testing, it would have looked cheap and terrible. There’s nothing worse than a bad costume.”

The Wasp‘s bodice was saturated with a reflective silver tone background color and topped with 90 gold-tinged patent leather pieces cut in a honeycomb pattern on two different levels. “The most difficult part is getting it so the actors can raise their arms,” says Frogley, who studied medieval armor for clues about upper body mobility. “They’d already worked all of that out in ancient times, so I found it to be incredibly helpful.” For the Wasp, she says, “The fitter built in all these secret slots so these bits in the body of the costume could slide in under each other, like scales of lizard. This allowed Evangeline to raise her arms.”

Teamed with Marvel’s head of specialty costumes Ivo Coveney, Frogley also experimented with the characters’ magnet-embedded helmets until Rudd and Lilly could perform without distraction. She says, “It took ages to get to the point where Evangeline wouldn’t steam up her Wasp mask, where she could breathe comfortably and where she wouldn’t be too hot.”

Frogley, leading a team of more than 50 artisans, set up her wardrobe shop in a warehouse outside Atlanta, where Ant-Man and the Wasp was filmed. “We did everything in house,” she says. “All the sculpting, all the molding, all the laser cutting, all the 3-D printing, all the sewing.” Once production began, costumers shifted into high gear. “It was very intense, like being [the pit crew] at a race track,” Frogley recalls. “We always we had a team standing by repairing costumes, mending nicks and scrapes and things.”

Frogley, who cites “Silver Age” comic book artist Steve Ditko as an especially inspiring touchstone for her Marvel designs, approaches each movie as a massive research project. For Ant-Man and the Wasp, she says, “I got very interested in learning about why plastic melts when you try to laser-cut it. I looked up formulas on line and figured out which element causes laser machines to break. Then I found the material that doesn’t have that element in it, which turns out to be patent leather. This allowed us to use laser machines happily without them all catching fire!”