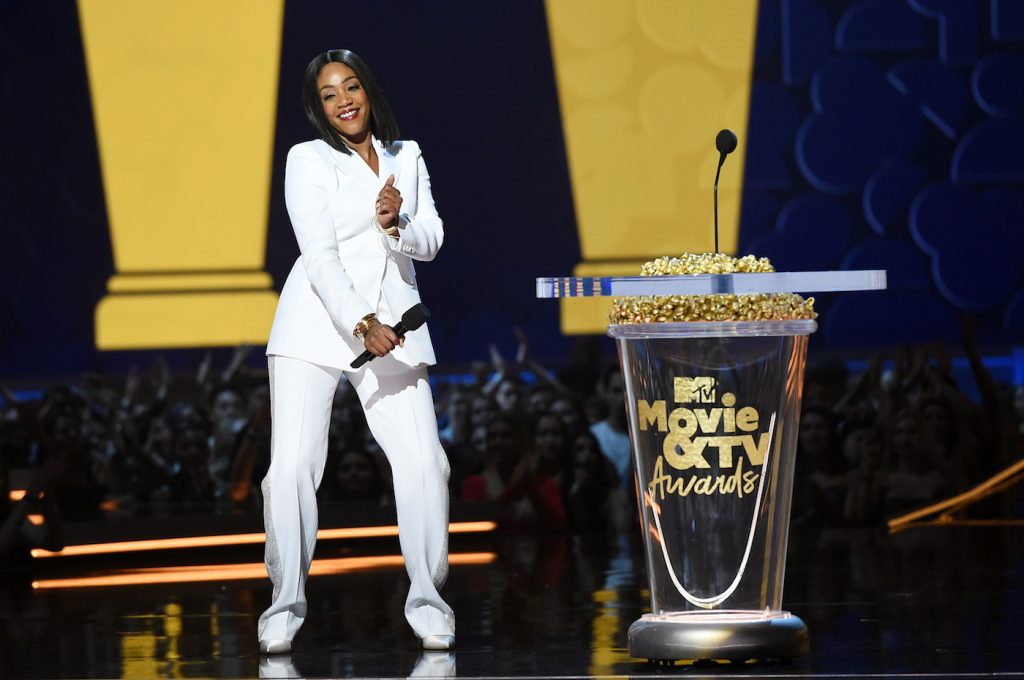 Although the MTV Movie & TV Awards are no longer one of the more exciting nights in the television world, last night Tiffany Haddish brought the heat, her brilliant sass and hysterical jokes to the stage. Haddish slayed Girl’s Trip and SNL as a host back in 2017, so when she was chosen to host the 2018 MTV Movie & TV awards, we knew we were in for many laughs. However, not only did she leave the audience in tears with her stand-up comedy talents, but she also stylishly strutted into the arena ready to battle in a hysterical sketch, challenging Black Panther’s own Prince T’Challa for the throne.

Haddish could not take on this challenge without her girls. In fact, she had the help of her co-stars Queen Latifah and Jada Pinkett Smith. Who would want to suit up against these feisty ladies?  T’Challa never surrenders without a vicious fight, and it seems that the girls’ little dance to TLC’s Waterfalls didn’t quite help them win a victory royale. The battle field became even more exciting as we even got a glimpse of our Get Out co-star, Lil Rel Howery, who got in on the action as a tribe leader.

Slash Film also reports that last night Haddish turned up the heat with Star Wars very own Kylo Ren in another hilarious video sketch. Haddish definitely liked what she saw–mesmerized by Ren’s long face and weathered hair. And let’s not forget, a man in high-waisted pants is her weakness. She was undeniably connected by Ren’s strength with the dark side of the Force. Yet, the two lost their spark when Haddish whips out what she calls her “massager” and Ren demolishes it out of disgust. Haddish never fails to keep her audience enthralled and exhilarated, and last night she most definitely had us laughing the entire show.

The Award ceremony ended on a positive note, as the striking Lady Gaga made a surprise appearance to announce Ryan Coogler’s Black Panther won Best Movie, Best Hero for Chadwick Boseman, and Best Villain for Michael B. Jordan.