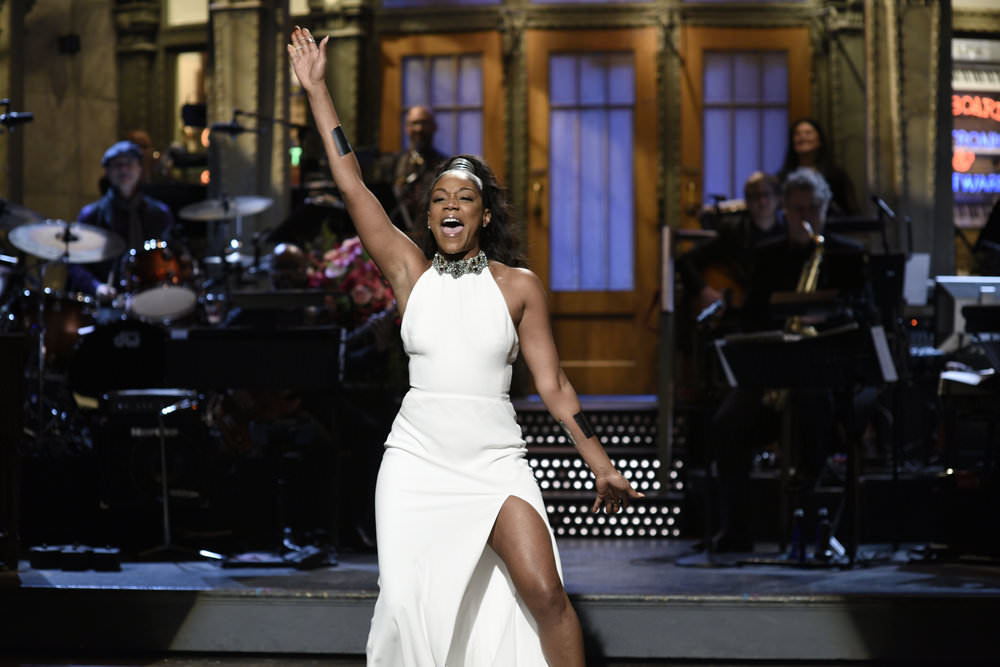 Can Tiffany Haddish just be a permanent SNL cast member? The Girls Trip star hosted this week’s episode and she raised the bar for the entire season. Haddish dazzled every time she appeared on screen, and it wasn’t just because of that killer white dress.

SNL has been an important platform for parody and political and social commentary in its 43 year run, but it’s also intended to strike its targets in a light tone. In these dark and dreary times, Haddish is bright and fun. She is a born entertainer who showed off her versatility, leading a number of great skits as a first time host.

The episode took plenty of swings at the current administration and the sexual harassment crisis, but Haddish glowed in original concept sketches. “The Last Black Unicorn” was a particular highlight. Haddish didn’t miss a beat establishing a character and nailing all the punchlines. The joke played off of one of Aidy Bryant’s many strengths, staying upbeat in the face of misfortune. Also, that costume was incredible and it’s really unfair that Halloween has already passed. As always, the craft team on SNL does wonders, pulling off incredibe sets, props and costumes every week, and in this case they made not one, but two magical unicorns happen.

The other highlight of the episode was Haddish as Boo Boo Jeffries, an out of place character in a fight based video game. As the Player, Kenan Thompson, scrolled through, each of the cast members bounced in virtual reality. It was a really good touch for anyone familiar with game design. Haddish slayed as a conflict averse avatar who’s “greatest strength” was her relationship with her mom. Of course, Boo Boo Jeffries was predictably a weak player in the game, but the sketch was one of the season’s best.

Other standouts of the night were the mock Lion King auditions and Cecily Strong portraying a stressed out HR employee who cannot get through to people during sexual assault training. Taylor Swift debuted the long awaited Reputation album with a strong performance, but no one could steal Haddish’s spotlight. This is her year, and we’re so pumped to watch her star continue to rise.

Featured Image: Pictured: Host Tiffany Haddish during the Opening Monologue in Studio 8H on Saturday, November 11, 2017 — (Photo by: Will Heath/NBC)