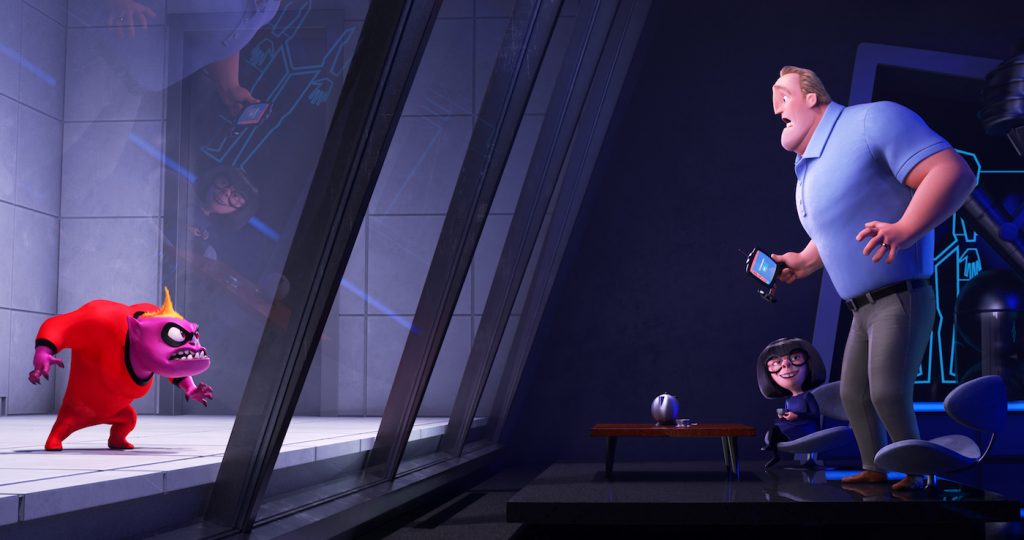 Like production designer Ralph Eggleston, with whom we spoke about putting together the look of Incredibles 2, shading art director Bryn Imagire is a longtime Pixar collaborator. Since working as a computer graphics painter on 1998’s A Bug’s Life, Imagire has been a member of the visual effects or art departments of Coco, Ratatouille, UP, the first Incredibles, of course, and more. Revisiting the temporary sidelined superheroes Bob and Helen Parr (Craig T. Nelson and Holly Hunter), and their children, champions, and foes in Incredibles 2, much has changed in the technology behind the film’s CG animation. But as we learned, sitting down to talk with Imagire, the more the technological savvy changes, the more the design process itself stays the same. Imagire walked us through the real world path she and the design team took to achieve emblematic midcentury modern architecture in animated form and her role as a shading art director as well as a costume designer.

As the shading art director, what was the essence of your role in designing Incredibles 2?

I work with the production designer, Ralph, and Brad. Usually in the beginning of the film, you figure out what the look of the movie is, but since this one is starting off where the last one stopped, we didn’t have to do that as much as just continuing the look. So I have a say in designing the colors and textures for characters, props, sets. The shading art director is something that exists only in CG, because the light has to reflect off of something — if there’s nothing there, it just looks plasticky and bad.

Can you describe what the design process, from start to finish, might be like for, say, the midcentury mansion the Parrs move into?

The way we usually work is that we start off by figuring out the time period of the look, and because we took from midcentury modern, we used that as a starting point. Brad’s style is that he likes very clean lines, and we all love that time period, it’s so rich in design. So we figure that out first, and then we start doing a ton of research. On this one we went to Palm Springs. On the first movie we went to a lot of actual midcentury modern houses, in Los Angeles, case study houses, the Frank Lloyd Wright Hollyhock House, the Eames House. There’s [also] a surprising amount of midcentury architect-designed homes in the Bay Area.

Do you know the book Modernism Rediscovered, by Pierluigi Serraino? The photographs are done by Julius Shulman — he’s famous for photographing that style of architecture. Serraino took us around to a lot of the houses, so he could show us how things were constructed at that time, and got us used to looking at what kind of materials they used. So I have that memory of all those trips we took to those houses. Then, when we went to Palm Springs, it refreshed us about all the aspects of site-specific architecture, like where there’ll be a house built on an outcropping — instead of removing a lot of rocks that are originally there, they’ll build the house around it.

We used all those same ideas about architecture on this new house. We did make it much more gigantic. And we made two houses, a much smaller, modest house which wasn’t as architecturally significant, [while] the second house we made was bolder and more dramatic, and was designed to be a hindrance to the family. There were a lot of things that prevent Bob from being able to take care of the kids, and furthers that character arc of Bob having all these problems taking care of the family.

So that’s our design process. The execution part is like building a real house, I feel; we’re just doing it in CG. You do the blueprints, figure out the materials and colors for everything, after we do the research.

You’ve been working in this field for a long time. How has technology changed your job?

The technology doesn’t change my job as much as it makes it look so much better, faster. The thing that was always hard before in CG was that everything looked very separate from each other. So if you had a city, all the buildings looked distinctly separate. With global illumination, which means one light in the virtual environment, it brings everything together and makes everything look much more natural.

And now, kids come out of school and they’re just so savvy with the software and all these different tools that that makes my job much easier, because they just get it and run with it, and everything looks great. My own process is still the same — I love to go to a time period or specific environment and just really be an artist, and absorb and really look at things in a way that I trained, as an artist, to do. I love to make practical models. I also did costume design on this film, and I try to work what I’m interested in into the process of design so it’s always new and fresh, and I’m always learning new things. But technology doesn’t really change my way of working.

Ralph Eggleston, the PD, talked a bit about actually holding back, do to the limitless nature of technology. How does that apply to your job?

In CG, because it’s endless and you can just keep adding, adding, adding detail, that infiniteness is what live action people don’t have to deal with, because you can only fit so much into a set. In CG there’s really no limit to what you can do, and one of our jobs as designers is to put stakes in the ground — very loose stakes, but stakes nonetheless. So we’ll know, okay, we’re not going past this point in terms of detail, because in CG, as things go through the pipeline, the modeling, shading, lighting, at each step, more and more things are added. So the experience that you start to develop — I know I have — you can see all that detail being added along the way, and if you don’t put a stake in the ground, sometimes it ends up being much more than what it started as, as a blank slate. That’s something pretty specific to CG.

Do you have a favorite character in this film, in terms of design, or a preferred setting?

On the first film, I designed the costumes with Ted Newton. Being able to keep doing that on this film, and continuing that on a lot of female characters, was super exciting. There were E [Edna Mode], Helen, Evelyn Deavor, and Violet, of course. Being able to design wardrobes for all of those female characters was kind of a luxury for me, because a lot of times, there aren’t as many female characters as males. Being able to carve out their character arcs — E not so much, because she only has two costumes, but it was still fun to design hers — but for Evelyn [and the others] to carve out their character arcs with costumes was really challenging and rewarding, and fun for me.

Featured image: MAD ABOUT E – When Jack-Jack’s many powers are revealed to his family—finally—in “Incredibles 2,” Bob finds himself turning to Edna for help. Featuring the voices of Brad Bird as Edna “E” Mode and Craig T. Nelson as Bob, “Incredibles 2” opens in U.S. theaters on June 15, 2018. ©2018 Disney•Pixar. All Rights Reserved.