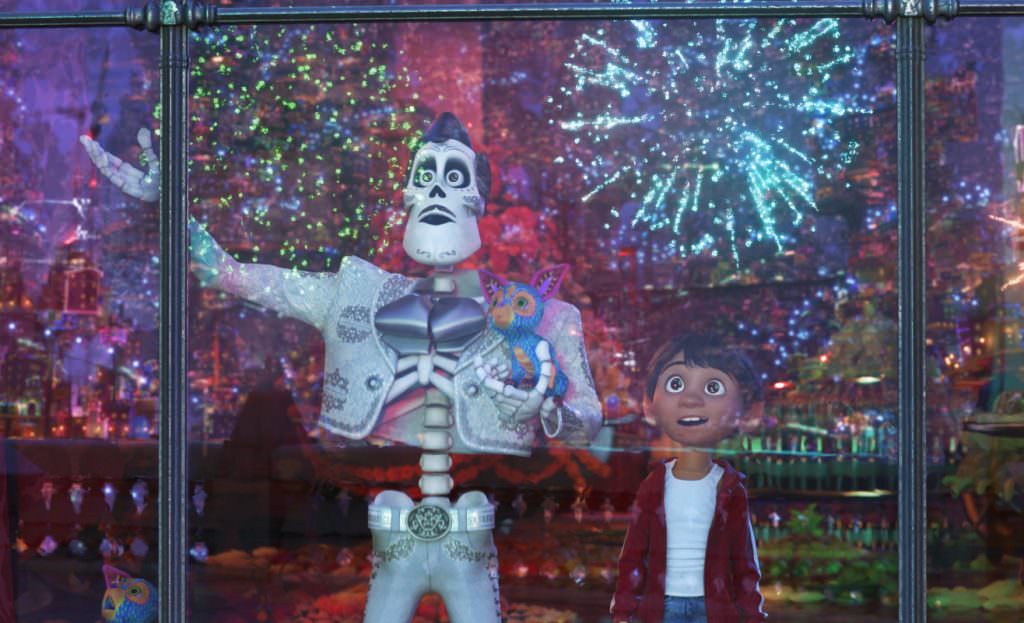 In Pixar’s Coco, a Mexican boy named Miguel (Anthony Gonzalez) visits the Land of the Dead and meets his ancestors. The look and storyline are based on Mexican traditions, including Día de Muertos, when families invite their ancestors back for a visit with photographs, stories, and food.  Story supervisor Jason Katz talked with us about what inspired the dazzling visuals and heartwarming relationships in the film, and how Pixar’s latest is connected to classic Disney and Pixar films throughout the years.

Some of the characters reminded me of that wonderful skeleton dance in Disney’s 1929 Silly Symphony short animated film.

You’re spot on. I think those Silly Symphonies are the closest to what we were hoping to shoot for. We developed a whole mindset on how to have them move and how they work and what is the elasticity because there are no muscles or tendons or anything holding the bones together. It’s never explicit in the movie, but the animators have kind of a rule set for themselves that the more well remembered a character is, the tighter the imaginary rubber bands holding the bones together are. Hector is a mess and a comical character and you can let some of the pieces fall off. And in order to understand how we could make the skeletons work and to give them character, we actually went back to some of our classic Pixar movies and made skeletons of Bob from The Incredibles and Woody from Toy Story. That helped us understand the underlying shapes and the way they tell us who these characters are.

Movies for children do not usually dwell on death, but this movie spends most of its time in a world of skeletons, all that is left of people who have been dead for many years. How do you make that story meaningful but fun and not too scary?

When we first started thinking about this movie, one of the things we learned early on was that in this story death is a part of it, but it’s not really what it is about. And so, we found that we could using the themes of the holiday and could kind of lean into things that are a lot more relatable and universal to us as well, like remembrance. Yes, people have died, but if we remember them, if we’re actively happily sharing them in our lives, then that creates an opportunity during a few days a year for them to come and visit us. They’re always present. They’re just somewhere, and during the holidays the boundary becomes porous and if we actively remember them more they can come visit us. We don’t get to see them but we get to share their stories and they get to see that we care about them and are honoring them and that just felt beautiful. They’re going to be lead into the world of the dead and it’s not going to feel like a scary hidden place. We know that we’re making movies for a general audience. We have a ton of respect for the audience. And so we think about our own families: is this too much for me or is this too much for you? Would you take your son to that? Would you take your mother? We tend to use our kids and our parents as gauges and if they’re both going to understand what we are feeling I think that we’re on to something.

Coco is the great-grandmother of your main character. It is unusual to name a movie after a character who is not on screen for most of it.

We usually don’t name our films or commit to a title till well after we’re into production, so we always have a code name. We liked the name Coco because it was easy to remember and short and something that everybody could say. We had a character named Coco and everybody loved her, but she transitioned out of the movie into something else. But we just kind of got used to calling the movie Coco and we recognized that Miguel’s great-grandmother is the perfect symbol and the perfect link between the land of the living and the land of the dead. For a story about a boy who needs to go off to this other world and bring healing, she’s the living embodiment of having a friend, that visual symbol of representing the themes present in the movie. It’s not until you’ve watched the film that you really understand why the title makes sense, but we kind of felt ok with that because she is the most important character in the film.

It’s interesting also that after two films with Dory, you have another character who has memory loss. What does that bring to a narrative?

Finding Nemo was all about fear versus faith and fear versus trust. The primary relationship is between Marlin and his son Nemo. However, they’re not together in most of the movie. So, we needed a proxy for that, and so the proxy for that relationship would be the equivalent of an adult child and that is someone with a disability like memory loss. And Dory’s character based her entire life on trust. She was alive and trusting and sweet and really just managed to live her entire life with that belief system. She was the exact opposite of Marlin, who was so fearful. Her experience taught her that to survive you needed to trust the world and Marlin’s experience was that to survive you need to fear the world. That’s good storytelling. You put them together now you have the ability to put them in any situation and both of them have something to say.

For Coco, remembrance is fundamental to the celebration. So we knew that was a theme that we wanted to play with, and once we started to dive in and we learned about what in Mexico they call the third death. We all die three times. The first time is when we die physically and we are no longer breathing, and the second death is when we’re buried and nobody can see us. And then the third death is when we’re forgotten and nobody’s telling our stories. Nobody is remembering us. We thought that was so beautiful and so impactful. Remembrance is what the celebration is all about and so, Coco’s character shows us her battle for remembering and her connection to this world. She’s physically there but she’s not mentally there.

Like you, a lot of the people at Pixar have been there for a long time, and I feel like we’ve moved through their lives with them, from the sibling rivalry to growing up, having your children grow up, retirement, and now death.

You’re absolutely right. The Toy Story films are a perfect example. The first one is about jealousy and the fear of not being the favorite, and then the third one is about saying goodbye to your kids as they go off to college. That’s exactly what was happening in the lives of our creative leadership. It’s so funny – there’s all the work we’re putting into trying to craft these stories, but if you step back there’s a fascinating college dissertation to be written about the lives of our directors and our creative leaders and how that is reflected in our films.