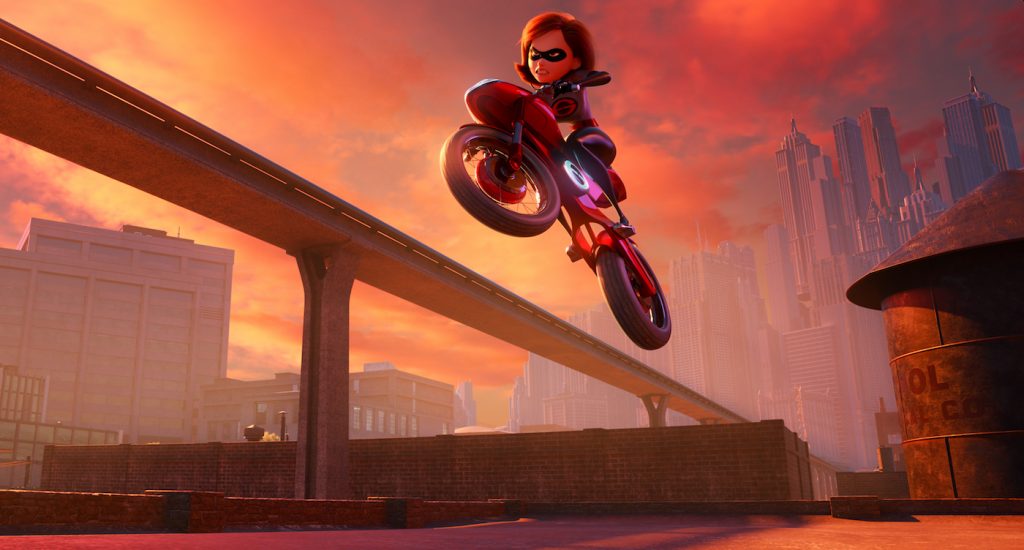 Fourteen years after Pixar’s The Incredibles anticipated Hollywood’s wave of superhero titles with the charming, animated, crime-fighting Parr family, director Brad Bird revisits the Parrs right where he left them — undercover, in a 1950s-era strip motel. At the beginning of Incredibles 2, Mr. Incredible (Craig T. Nelson) and Elastigirl (Holly Hunter), Mom and Dad Parr, have messily and unsuccessfully taken on a bank villain, and their superhero program is getting the axe. Luckily, perhaps, private capital is here to help the superhero family save the day, with Winston Deavor (Bob Odenkirk), the supers-obsessed scion of a telecommunications fortune, moving the family into a stunning if impractical midcentury modern mansion. With his somewhat cooler-headed sister, Evelyn (Catherine Keener), he devises a publicity campaign to make supers beloved, and therefore legal, once again.

It all goes wrong, of course. The tricks of an unseen villain operating under the moniker ScreenSlaver occur at inopportune moments, with ScreenSlaver hacking nearby screens to hypnotize key civilians, as well as the supers themselves, thwarting Winston’s plans. The villain’s tools include teleprompters, televisions, and glasses, but no cell phones — in this midcentury take on the future, they don’t exist. The Parrs’ world is both deliberate and innate feeling, with late 1950s and early 1960s architecture, autos, and tube TV sets easily mixing with souped-up, futuristic details like enhanced supersuits, a glossy speedboat and an even sleeker monorail, and Elastigirl’s custom motorcycle, a gift from billionaire Winston (so you know it does cool stuff). The characters, meanwhile, are consistent with the first film, albeit with more finely expressed detail — computer animation has changed far more than they have in the past decade and a half. We talked to the production designer, Ralph Eggleston (whose other credits include the first Incredibles, Finding Nemo, WALL-E, and Inside Out) about his historical references and creating a believable world for the Parrs and their superhero ilk.

Can you tell us about the decisions that went into the dual futuristic and midcentury look of the film?

It’s the 1950s version of the future. There are elements that did exist, elements that had started to exist, and elements that never quite made it — we always called it ‘where’s my jet pack?’ It’s the fantasy of the future. Even with this style, though, we wanted to pretend, in that world, that we were edging it forward a bit. Even though the sequel starts precisely where the original film left off, we wanted to propose to the audience that now that [the family] had to move, we could advance them a little bit further.

We went from 1955 to 1957, which was the original film, to 1962-ish. We could do pretty much anything we wanted to do, so long as it felt right. Brad wouldn’t tell you if it was right or wrong, he could tell you if it felt right for the Incredibles. It’s one of those things where they have elasticycles but they don’t have cell phones. They have televisions, which look like tube televisions from years ago, but they’re flat screen. We got to mix and match a lot. Very rarely did we do something where Brad said, that doesn’t feel right. So he was the arbiter on that.

As far as the architecture goes, there was so much more we could have done on the original film. On this film, I was more prepared for that, and went in knowing we were going to have a lot of sets, and a lot of characters, so let’s not waste time our time over-designing, but do what we feel is right, massage it along the way, and that’s what we did. We’d sculpt it and work with the technical staff to make sure we got as much as we could, rather than spend time in meetings discussing what we could or couldn’t do, [we’d] try to do it all. We were able to get quite a lot into the film, so I was really proud.

What were particular sources of inspiration for the settings?

There were so many. Of course all of the most famous midcentury architecture, A. Quincy Jones, the Eichlers [midcentury real estate developments by developer Joseph Eichler], things like that. There was a terrific website I found. We ended up calling it “midcentury mundane” — it wasn’t the coolest buildings from the 1950s, it was the buildings between the coolest buildings, the banks, the schools, the churches, the synagogues, the post office, and the parking garages. We went out of our way to bring as much of that into the film as possible, but fill it out.

There was an illustrator who did a lot of Motorola ads, named Charles Shreve, and his illustrations were a major inspiration as well as the photography of Ezra Stoller. He did a lot of black and white photography of architecture in the 1950s and 60s. I looked at his photography and made a big print of a bunch of photographs and just ended up staring at it, asking, why does this interest me so much? What I realized was, when I went back and watched the original film and looked at our story as we were progressing at the time, about three years ago, I said I get it now, the Incredibles is all about big and medium. It’s not about the small. The small is in the detailed moments with the characters. Whereas the world we’re inhabiting, which is a character itself, as well, is all about big and medium. The characters live in a big world. We had photographs from Ezra Stoller and these illustrations by Charles Shreve hanging up in almost every room we were working in just to remind ourselves, this is the world of the Incredibles we want to capture. It’s the world of James Bond, Johnny Quest, that kind of stuff.

Is there a particular sequence or setting in the film that’s a favorite of yours, or which you found notably fun to design?

A lot of it was. I think the most fun was the house. The house is about 20,000 square feet. I really can’t underline the significance of this, is that we actually finished an entirely separate house for the Parrs, a 2300 square foot home. In the original film, they lived in an Eichler-style home that was about 1500 square feet. It was destroyed at the end of the film. They’ve been living in a motel room since the last film. They move into a 20,000 square foot home owned by an eccentric billionaire. This is great, but it turns out to not be comfortable for them. We’d actually designed a 2300 square foot home for them that was a little bit bigger than their previous home. It was finished — we were in animation and lighting. And then Brad had to consolidate several sequences. And so I said, I wish we could’ve used this old idea I had, and I pulled out these drawings and showed him and he said, we’re doing that. And it was a much bigger house. The house we’d first designed for the film was also mid-century modern, and took about eight or nine months. We threw that all away. With the new house, we had about 3.5 to four weeks. So we really had to jam in a lot, did a lot of research, and threw everything on the wall, asked Brad what he liked and didn’t like, and started building it. It was frustrating but very gratifying, and because we had so little time, we really had to focus on the character of the home, and getting the characters in there and making it as uncomfortable for them as possible.

Here’s the funny part. The original home we built for the Parrs — both the interior and exterior were completely finished. And it’s actually in the film, in a couple shots, the most notable being the exterior of Tony Reidinger’s house in the very end of the film, when he walks to get into the car with the Parrs to go to a movie. And there were a couple cutaways, when people were inside watching television, where we used that house. We put a television on the wall, dressed it and lit it, and people didn’t know where we were.