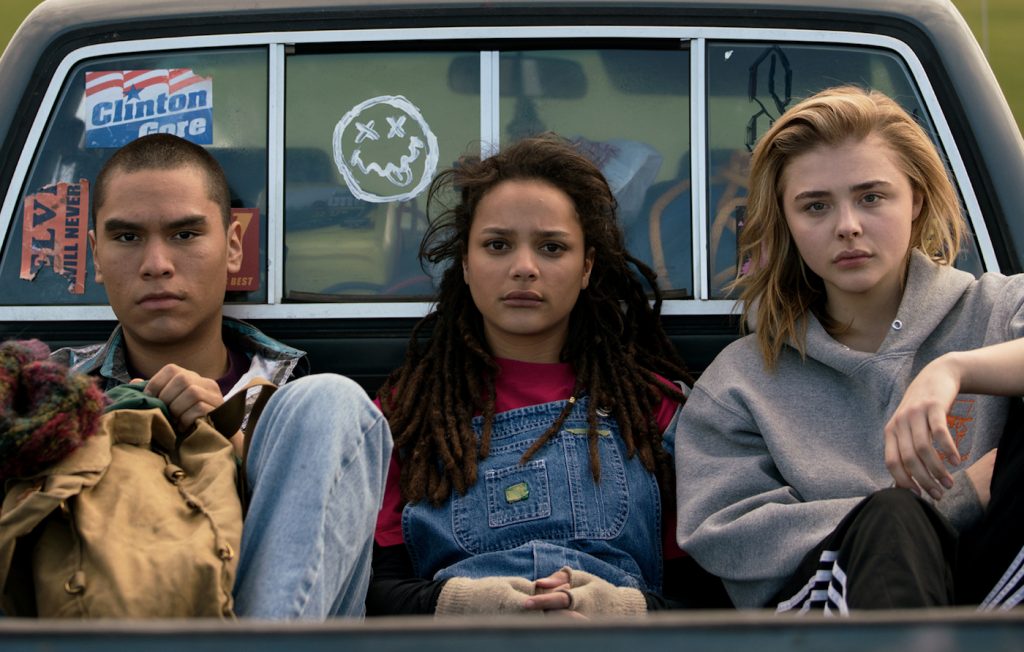 It’s hard to believe that Chloë Grace Moretz is just 21. Besides her poise, sophistication and groundedness, the Georgia native has amassed a diverse body of work, ranging from genre fare like Kick-Ass and Let Me In to acclaimed indies with renowned directors. She played Isabelle in Martin Scorsese’s Hugo when she was 14, and faced off with Juliette Binoche, as one actress manipulating another on- and offscreen, in Olivier Assayas’ Clouds of Sils Maria.

Moretz anchors her latest film, The Miseducation of Cameron Post, winner of the Grand Jury Prize at Sundance last January and opening theatrically in July, with an understated, naturalistic performance as a gay teenager who’s dispatched to a conversion therapy center after she’s caught making out with her girlfriend.

Her work on The Miseducation of Cameron Post and other indies made Moretz a natural for the Next Wave Award, given to younger stars who take risks and challenges in front of and behind the camera, from the Provincetown International Film Festival (PIFF) which took place June 13-17. Moretz accepted the award in conversation with Sundance Film Festival Director John Cooper. Moretz talked about breaking into show business when she was just five, and how one of her four older brothers, actor Trevor Duke-Moretz, encouraged and helped her. But despite much early success, Moretz in recent years re-evaluated her career choices which led to a desire to pursue “projects that have significant meaning in today’s climate,” she said.

It was Moretz’s first-ever visit to Provincetown. “I’m so excited for a multitude of reasons,” she said in an interview prior to the festival. “The festival has always stood for LGBTQ+ rights, and to be here with my film ‘The Miseducation of Cameron Post,’ and to be getting awarded is incredibly humbling. After reading the book and the script, it was apparent to me that Cameron’s story needed to be told to open people’s eyes and educate them on the realities of sexual conversion therapy.”

The dark comedy is director and co-writer Desiree Akhavan’s follow-up to her 2014 film Appropriate Behavior.

“I knew of ‘Appropriate Behavior’ and was a fan of Desiree’s approach to her filmmaking,” Moretz said. “Once I read this script, it was immediately apparent to me that I had to portray Cameron and that this was an incredibly important story that needed to be seen. Directors play a huge role in my choice of projects, for sure. It’s always an instinctual thing. What’s most important for me is to meet with the director and sit down and hear what their ‘in’ is on the story and how they want to depict it.”

In the film, based on Emily M. Danford’s 2011 novel, the teenage Cameron, an orphan, is sent by her strict, religious aunt to the remote conversion facility which aims to squash “SSA” (same-sex attraction) out of  its charges. There, Cameron juggles the authoritarian rule of Dr. Lydia Marsh (Jennifer Ehle) and her budding friendship with two rebellious teens and fellow residents, Adam (Forrest Goodluck) and Jane Fonda (Sasha Lane of American Honey), who help Cameron navigate her identity within the strict confines and rules of the facility. Moretz and Lane create a believable friendship that’s in sync with the movie’s mix of drama and dark humor.

“Sasha and I had met during rehearsals before we started filming. We almost instantly became close friends and built the friendship between our characters completely naturally,” Moretz said. “She’s an incredible woman — acting opposite her was so exciting. Her take on the entire process of filmmaking was so fresh and intuitive, it put a different energy into all of our moments, which I really think comes across when you see the film.”

This fall, the busy Moretz will be seen in director Luca Guadagnino’s much-anticipated remake of the 1977 horror classic Suspiria, with Dakota Johnson and Tilda Swinton. She’ll also be in Neil Jordan’s upcoming The Widow, costarring Isabelle Huppert. She’s the voice of Wednesday in a stop-motion animated version of The Addams Family, due out in 2019.

Besides developing projects that inspire her and connect with the larger world, Moretz is also interested in working behind the camera. “In the next chapter of my career, I’m going to be taking on directing with my brother Trevor. We have a production company we’ve been developing over the past few years,” she said, including working with a major cable network on a documentary series about gay conversion which is still practiced on young people in many states. Moretz had met with survivors of the controversial practice while preparing for the role in the film.

“I also want to be pushed and challenged by becoming characters that I can learn from emotionally,” she said.