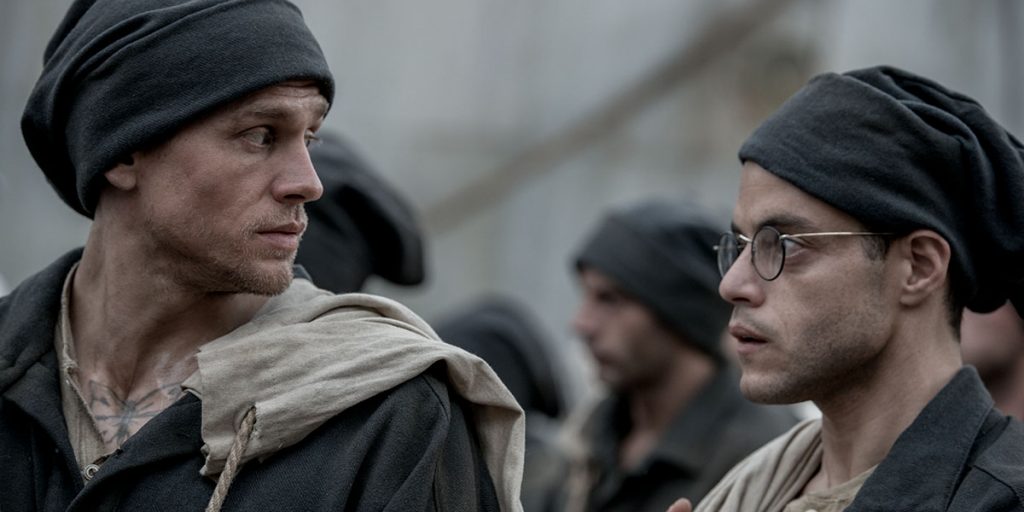 Alcatraz might be one of the most famous island-based prisons, but Papillon will explore the brutal prison in French Guiana that was made even more infamous in a famous book. The first trailer for the remake, based on Henri Charrière’s ‘Papillon’  autobiography, looks gritty, dark, and suspenseful. Charlie Hunnam (Sons of Anarchy) stars as the title character alongside Rami Malek as Louis Dega, from director Michael Noer.

The conditions of the desolate French prison look inhumane, but the cinematography is actually beautiful. The decadence of 1930s France strikingly juxtaposes the nightmare Papillon is living in French Guiana. Falsely arrested for a murder, Papillon befriends the eccentric and wealthy Dega. The convicted counterfeiter offers to fund Papillon’s escape, which becomes a daring and risky adventure. The odds of surviving an escape attempt are very low, as detailed in the trailer. Escape the guards and you’ll be stranded in the bush without food, or, even more fun, in the shark infested seas. Even an attempt is punished with two years in solitary confinement and a second attempt lands the prisoner at Devil’s Island, which is even less appealing than it sounds.

Papillon is based on a true story, but the trailer takes some licenses we’re guessing were dreamed up by the filmmakers. Whether it is fantasy or hallucination, the false imprisonment drives Papillon slightly mad. He begins seeing things that are almost certainly not true, from what we know about the story. Still, they make for a striking first look at the film.

Charrière’s autobiography, published in 1970, became an instant commercial success. The riveting adventure story was adapted into a film in 1973 starring the legendary Steve McQueen as Papillon and Dustin Hoffman as Dega. The original was largely an escape adventure film, whereas the new version seems to introduce more psychological elements.

Based on the international best-selling autobiographic books “Papillon” and “Banco”, the film follows the epic story of Henri “Papillon” Charrière (Charlie Hunnam), a safecracker from the Parisian underworld who is framed for murder and condemned to life in the notorious penal colony on Devil’s Island. Determined to regain his freedom, Papillon forms an unlikely alliance with a convicted counterfeiter Louis Dega (Rami Malek), who in exchange for protection, agrees to finance Papillon’s escape.