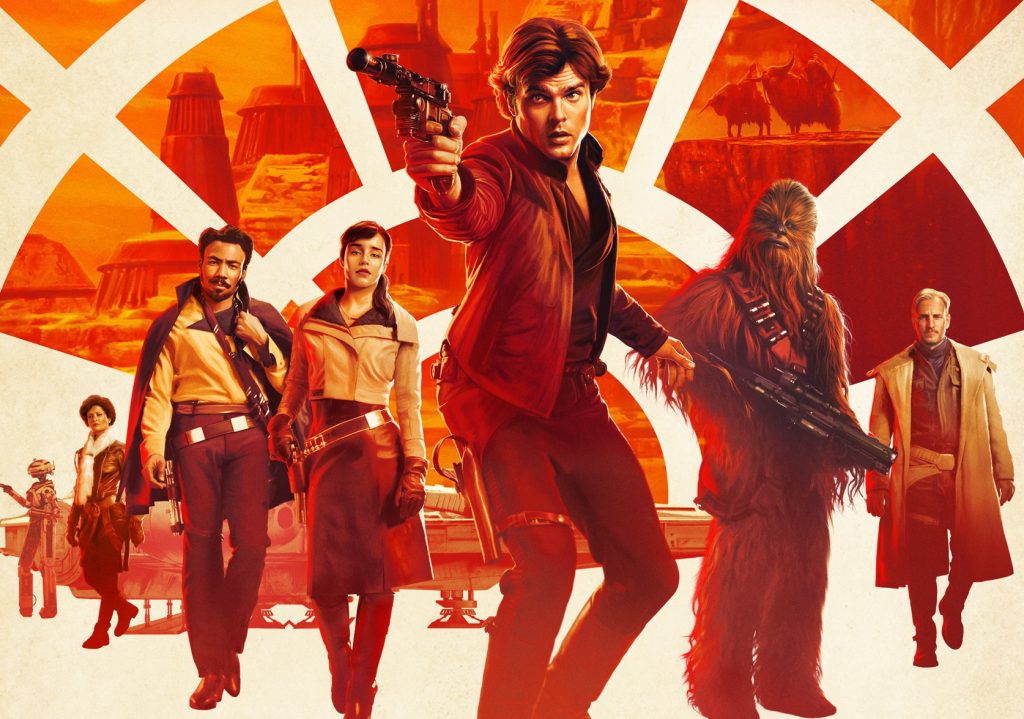 This new Solo: A Star Wars Story Trailer is the Best Look at the Film Thus Far

Chewie has a girlfriend? This is just one potential bombshell from the new Solo: A Star Wars story trailer, the the most thrilling, comprehensive look we’ve seen of the film yet. Disney and Lucasfilm released the new trailer yesterday, and already its generating a mighty cosmic storm of positive buzz. It looks like Ron Howard’s take on the young Han, played by Alden Ehrenreich as the legendary smuggler-to-be, has captured something special. The vibe is loose, scruffy, a little bit down and dirty, almost like a cosmic Ocean’s Eleven with more Wookie fur and Lando mustache. It feels like something both fresh (a Star Wars heist film) and of a piece with the entire franchise, giving us a look at how one of the most iconic characters in the galaxy came to be. We’re digging it.

“You’re after something,” Emilia Clarke’s mysterious Qi’Ra says as the trailer opens and we’re looking into the beaten up face of the young Han, who appears to be temporarily incarcerated. “Is it revenge?” she asks, and here we get a closer look at the film’s potential villain, with Han unlatching the holster of his blaster. “Money?” Which leads us to a glorious shot of the young Lando Calrissian (Donald Glover), all royal bearing in his cape, mustache, practically smirking over a pile of chips in the midst of a game of sabaac. “Or is it something else?” The final part of Qi’Ra’s three-part question leads us to the money shot—Han and Chewie (Joonas Suotamo) looking up at the Millennium Falcon, the very vessel of their future life together and the seat from which they get into all sorts of insane adventures and ultimately help save the galaxy. With Han, however, the answer to Qi’Ra’s question is probably a bit of all three.

The new trailer gives us more of an outline on the film’s premise, centering on Han hooking up with Tobias Beckett (Woody Harrelson), the man who will introduce him into the world of smuggling. “If you come with us,” Beckett informs him, “You’re in this life for good.” Well, sort of—when we meet Han in A New Hope, he is indeed a smuggler, but he becomes, by film’s end, a galactic hero.

Qi’Ra seems like both a potential love interest for Han and someone who knows her way around the galaxy’s shadier realms, as she’s the one who eventually connects Han to Lando and, ultimately, the Falcon. (There’s a fun moment in the trailer where we meet Lando’s droid, L3-37, played by Phoebe Waller-Bridge, who has a bit of an attitude problem. Poor C-3P0 remains the only droid who can’t kick butt.) The big score that appears to be the film’s centerpiece is being set up by Paul Bettany’s gangster, Dryden Vos (originally played by Michael K. Williams, but Bettany was brought in when Williams couldn’t make the re-shoots due to scheduling conflicts). This score looks to take place on a space train, which necessitates the need for an insanely daring space train robbery. Yup, we’re sold.

“Let me give you some advice,” Beckett says in the middle of the trailer, “assume that everyone will betray you, and you will never be disappointed.” This line could be a nod towards Lando, who famously does betray Han (although he tries to save his life, sort of) in Empire Strikes Back. For much of Han’s life, however, he’s supported by someone who never betrays him—Chewie. Then, at the 1:33 mark, we get our moment of Wookie-nooky (apologies)—Chewie and…a potential Wookie love of his own? Is this a girlfriend? Or (apologies again), a family member? The internet may crash from this one moment alone.

The trailer ends with two thrilling sequences: a space battle in which Chewie reveals both his ability to fly and his age (190-years old!), and the train robbery itself in full swing, with Han trying his level best to save Chewie’s life. Whatever concerns have been floating around Solo since previous directors Phil Lord and Chris Miller stepped aside are dissipating like so much blaster smoke, as each new trailer gives us a glimpse of what looks like a truly riotous, fun Star Wars film.

Solo: A Star Wars story opens on May 25th. Check out the trailer here: