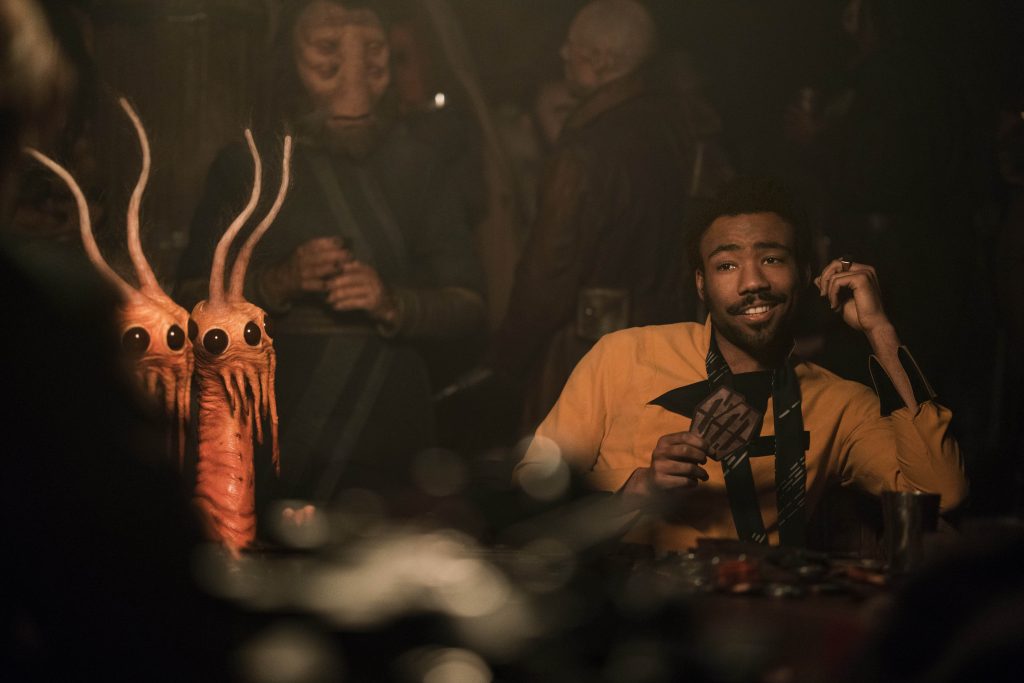 Get In On an Intense Game of Sabacc in This New Solo: Star Wars Spot for Denny’s

Han Solo is as close as we get to a space cowboy from the Star Wars canon. He’s quick on the trigger, a bit of a troubadour, and he won the Millenium Falcon in a game of poker – er, Sabacc, rather. A new commercial takes us to the table where a rough game of Sabaac is being played. You might think this Collider exclusive is a clip from the Solo: A Star Wars Story, but surprise – it’s a Denny’s commercial.

Inside a dirty, wild, and smoky saloon we find Chewbacca and a host of fun aliens. A tense game of Sabacc is being played nearby and two young gamblers guard their cards closely. After a frustrated player folds, a stare down begins and only Chewie breaks the silence. It’s a fun immersion into the world of Solo and parodies one of the most anticipated moments from the movie. Han (Aiden Ehrenreich) and Lando (Donald Glover) will presumably sit at that very table and play for even higher stakes in the upcoming film.

Solo production designer Neil Lamont and creature supervisor Neal Scanlan helped create the commercial. It’s obvious, as the location and characters are the real hook of the spot. You can even spot some aliens here that appear in Solo promos like that two headed crustacean guy. There is a real diversity of creatures here and every detail from the robot bartender to atonal karaoke star and even the clawed alien slurping his noodles is masterfully executed. Pretty high production value for a restaurant commercial.

Disney announced last month that they would be teaming with six promotional partners including SOLO Cups and Denny’s. Now we know more about the partnership and details of the campaign. The restaurant will offer a new Solo themed menu and diners can snag collectible trading cards. I’m not sure I’d drink whatever is in Chewbacca’s cup, but there are sure to be other tasty treats on the menu.

So what do you say? Up for a game of Sabacc?

Solo: A Star Wars Story opens in theaters May 25.