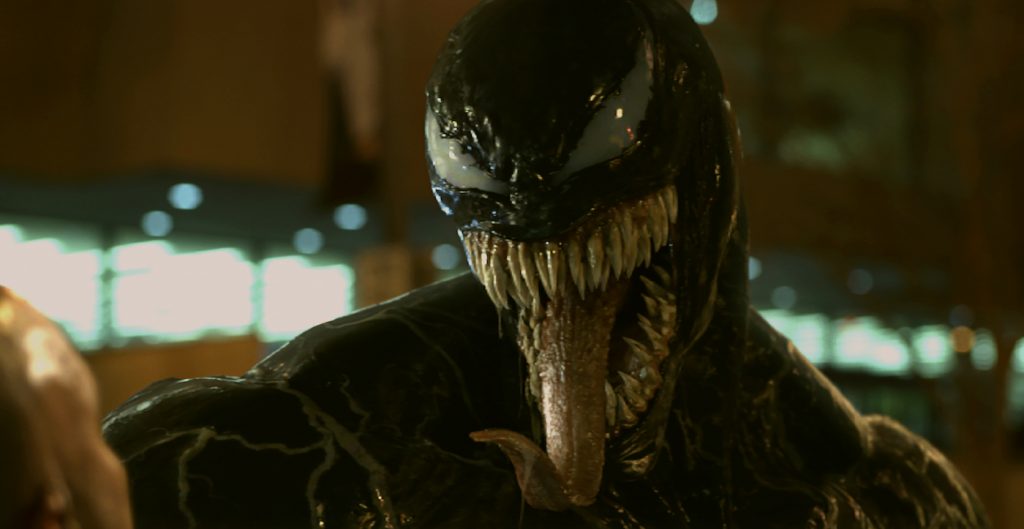 The last peek we got at Eddie Brock (Tom Hardy), he was only just starting his transformation into one of Marvel’s most twisted, iconic anti-heroes, Venom. The first teaser for Venom gave us a a glimpse of what was troubling Brock, beginning with a breakup with his girlfriend, followed by losing someone close to him, and then a mysterious but major accident with an alien craft. It was this last bit that would turn out to be the most momentous—in the accident, Brock merged with a symbiote that takes over his body giving him superpowers and, possibly, some evil intentions. Peter Parker pulling on his Spidey-suit this is not. Yet we never actually saw Venom in the teaser, but we do now. In the film’s first trailer, we get to see the sometime monster/sometime superhero in all his wicked glory, and the sight of Hardy become one of Marvel’s most gruesome characters was worth the wait.

In Hardy, you have quite possibly the perfect actor to embody the troubled, brooding Brock. He’s been surrounded with a stellar cast, including Michelle Williams, Woody Harrelson, Jenny Slate, and Riz Ahmed, and director in Zombieland helmer Ruben Fleischer.

In the comics, it was Spidey who first came into contact with this alien symbiote. He quickly learned that the increased strength and endless web-fluid wasn’t worth the increased rage and aggression, so he had the suit banished (with a little help from his friends in the Fantastic Four). Brock, one of Peter Parker’s rivals, ends up getting infected by the symbiote and ultimately becomes Venom, a sort of dark mirror image of Spider-Man, with his same powers but in monstrous form. For now, it seems Sony will be keeping Venom separate from Spider-Man, considering Spidey is now a major part of Marvel’s Cinematic Universe (he’ll be appearing in a little film called Avengers: Infinity War in a few days).

What we know from the teaser and now this trailer is that Brock is dating Anne Weying (Williams), who works for Dr. Carlton Drake (Ahmed), a man with the kind of ambitions that always tip into monstrousness in superhero movies. Brock pays a visit to the good Dr. Drake’s office in his role as reporter, where he confronts him on some unseemly human testing being done in the doc’s lab. Those tests? Drake’s got a hold of the symbiote, and has been testing it on humans in an effort to create a more “evolved” species. So yeah, nothing could possibly go wrong there. When Brock goes to investigate, he sets himself on the path of becoming Venom.

The trailer gives us both our long-awaited look at Venom him/itself, and much more plot detail. It looks like an appropriately dark, twisted film, drained of the sun and splashy colors of the Spider-Man franchise. A film that looks primarily shot, and set, at night. When Eddie starts hearing a voice in his head, and some goons come to pick him up, Venom unleashes just a taste of his power, and you see immediately why Hardy was interested in the role—his Eddie Brock is essentially losing his mind while simultaneously “evolving” into something new. Eddie Brock becomes a we. It looks terrifying, and riveting, and a great vehicle for a man of Hardy’s talents.

Venom opens October 5th. Check out the first trailer below: