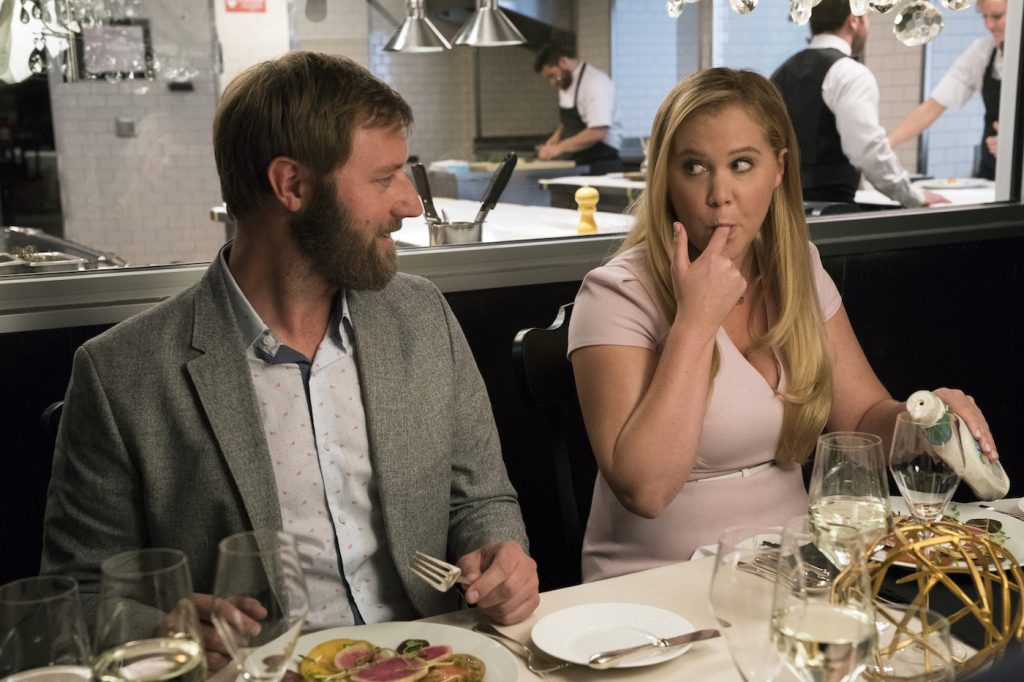 In I Feel Pretty, Amy Schumer plays Renee, a young woman who works for a cosmetic company and dreams of being “undeniably beautiful.” In a twist on the long-time movie tradition of a hit on the head that triggers – or cures – amnesia (see: I Love You Again, Overboard, Desperately Seeking Susan, and many more), Renee has an accident on a SoulCycle and somehow sees herself as the beauty she has always longed to be. Schumer, who showed impressive acting range in a small role in Thank You for Your Service, delivers a remarkably nuanced performance here, very funny but also filled with heart. It would be easy to make Renee look silly for thinking she is beautiful, especially when she impulsively does a wild dance in a bikini contest while she’s on her first date with Ethan (fellow stand-up Rory Scovel). But like Ethan, we watch her at first with some trepidation, maybe some embarrassment, and then, ultimately, with the realization that Renee, like the woman who plays her, is undeniably adorable.

In an interview with The Credits, Schumer and Scovel talked about some of their favorite moments in the film, and about their shared chemistry as actors who began in stand-up.

One of the movie’s best ideas is that the same unquenchable confidence that makes Renee suddenly much more appealing to people who do not know her is disconcerting and off-putting to the friends who already cared about her. Is there a line between confident and obnoxious?

Schumer: Yes, absolutely! I think what happens to Renee in this movie is that she thinks that not only is she confident, not only does she think she’s beautiful; she thinks she’s Giselle. She thinks she is a supermodel and she’s so comfortable in that role so quickly, which is something that always makes me laugh. She thinks that she’s about to have to deal with all this attention and all the things that come along with it when you get that hot. She thinks she is the prettiest of the Kardashians, so I think that there is a good level of confidence that she gets to at the end which I feel like I’ve settled into in my own personal life, healthy and not arrogant or insane.

Scovel: I think it’s what people do with that confidence that determines if it’s arrogance or overconfidence.

It’s less that she wants to be beautiful than that she has an idea of how beautiful people are treated, and her friends cannot figure out what is going on.

Schumer: That was the first scene I read in the movie and it made me laugh so hard and made me want to do the movie.

Tell me about coming up with one of the movie’s best moments, Renee’s hilarious strut into the office after she thinks she has been transformed.

Schumer: I loved doing that. So that was just a bunch of takes to get to that level because what I thought was like a really confident walk on a runaway, the director was like: More! Bigger! So I’m like literally almost lifting off the ground walking and I loved what happened; it makes me laugh to see that scene.

Rory, one of your best scenes was in the bar, watching the bikini contest, as you go through such a range of reactions.

Scovel: It was about trying to find that nonverbal place because of so many different facial expressions. He’s meeting this woman who is incredibly confident, not really understanding who she is, and then she decides to be in a bikini contest. So I think it started out with a little bit of embarrassment when he was wondering like, “What is this? I don’t want to be here. This is uncomfortable for me,” and then I think it really is the event that fully transforms him for the rest of their relationship, seeing her out there confidently dancing. He goes from being a guy who was like, “Who is this woman?” to “Oh, my God, I’m one hundred percent with the right person.”

Does your background in stand-up help you communicate with each other about your scenes together?

Schumer: We’ve been friends for over 10 years. We actually started stand-up around the same time so we already knew we had chemistry, and yes, there is a total shorthand because we’re both comics.

Your character is surrounded by people who really do look like supermodels, so while they are conventionally beautiful, they are also always being judged on their looks. What was that like in a movie about feeling confident?

Schumer: I just already know all women struggle with their looks. I’m friends with some gorgeous celebrities. Everybody struggles with self-esteem; it doesn’t matter what you look like. That is super comforting to me. I’m really conscious of all the people on the set, I think because I had a TV show and it was my set so I always really wanted everyone to always be comfortable, to feel safe and have a good time. So on this film I was really conscious of the background actors. I got to know some of them.  They had to wear those heels all day, so I would make they all had a box they could sit on in between takes. Especially in the bikini contest, I would say, “You guys can take off your heels like any chance you get.” We all spoke to each other like human beings.  We’re all humans, everyone is the same, and we all go to the bathroom and get bloated and feel good sometimes and bad sometimes.

I Feel Pretty comes out on April 20.