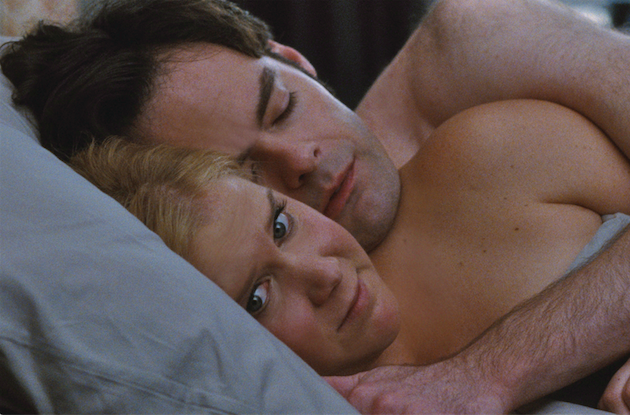 Amy Schumer, the comedian best known for her eponymous Comedy Central show, Inside Amy Schumer, is making her leading role film debut this Friday in Trainwreck, the latest Judd Apatow-directed rom-com. Here too, Amy plays a character named Amy, a magazine writer with a hellish boss (Tilda Swinton) and a well-meaning boyfriend, Steve (John Cena) who doesn’t seem to have much a of a clue what’s up with his significant other. Trained from a young age by her divorced dad (Colin Quinn) that monogamy is for suckers, Amy is living out a freewheeling romantic life that should make her happy, but doesn’t. Assigned to write about a sports doctor, Aaron (Bill Hader), Amy falls for him along traditional boy-meets-girl lines that don’t jive with her personal brand of non-committal romance, and her ensuing troubles bring to light all the ways her character has unhappily deluded herself into a loveless rut. As it goes with the standard rom-com formula, even a funny version like Trainwreck, you can probably guess where she’s headed. Just add LeBron James, playing himself, as Aaron’s surprisingly charming wingman.

Schumer’s singular approach to gender roles and modern relationships are a foundation of her comedy, and Trainwreck Amy is cast through a somewhat different lens than oddball, small-screen Amy, who skewers the trope of the desperate single lady while still showing that woman real compassion. In honor of Schumer’s new big screen role, we compare five of her best television and talk show moments on Things Ladies Deal With Today to Trainwreck Amy’s experience of the same.

Amy vs. Amy on body issues and the male gaze: Movie Amy isn’t particularly worried about her figure. Real-life Amy went on Ellen Degeneres’s show and made her host cry with laughter when she said her arms “register as legs” in Los Angeles, and described what it’s like to get courtside seats at a Lakers game, but next to tiny starlet Dianna Agron.

Amy vs. Amy on pre-sex prep: Television Amy’s preparations for a gentlemen caller are so high-octane, she works herself up into a hairless, Spanxed-out lather hyperventilating under her bed, ignoring the doorbell, doomed to never have sex again. Trainwreck Amy, however, would never fall victim to an army of judgmental aestheticians (and those confidence obliterating magazine pieces would have been written by her character).

Amy vs. Amy on better sex: We'll give you two for the price of one here. Film heroine Amy is a writer tormented by her evil editor boss. Inside Amy Schumer makes Amy into the evil editor boss, adds a layer of crazy, and sends up the insane world of women’s mag sex “tips,” with Amy presiding over the fictional Glamo magazine and a table of misled acolytes outdoing each other to come up with ways to maim and torture please their men. You can watch that here, just know, the clip is uncensored and therefore NSFW.  For a slightly more SFW clip, TV Amy is just not all that comfortable with what happened when she tried to spice up her sex life, a move Trainwreck Amy would have pulled off and then left before there was any chance for pillow talk:

Amy vs. Amy on break-ups: Inside Amy Schumer puts the recently dumped onto a gameshow to mercilessly capture all the ways they can fail to prove how “over” their exes they really are. This would never happen to Trainwreck Amy, always the dumper, never the dumpee.

Amy vs. Amy on old ladydom: Of course, Inside Amy Schumer’s end-all, be-all comedic moment musing on sex through the lens of the female experience is the “Last F**kable Day.” While a docile Amy gently inquires why Julia Louis-Dreyfuss, Tina Fey, and Patricia Arquette are clinking champagne glasses in a field before they send Julia off in a boat down the river of symbolic celibacy, the film’s Amy wouldn’t know anything about a Last F**kable Day — that course was definitely not part of rapscallion dad’s early childhood relationship training. (this video is uncensored).

Featured image: Amy (AMY SCHUMER) tries to relax with Aaron (BILL HADER) in "Trainwreck", the new comedy from director/producer Judd Apatow that is written by and stars Schumer as a woman who lives her life without apologies, even when maybe she should apologize. Courtesy Universal Pictures