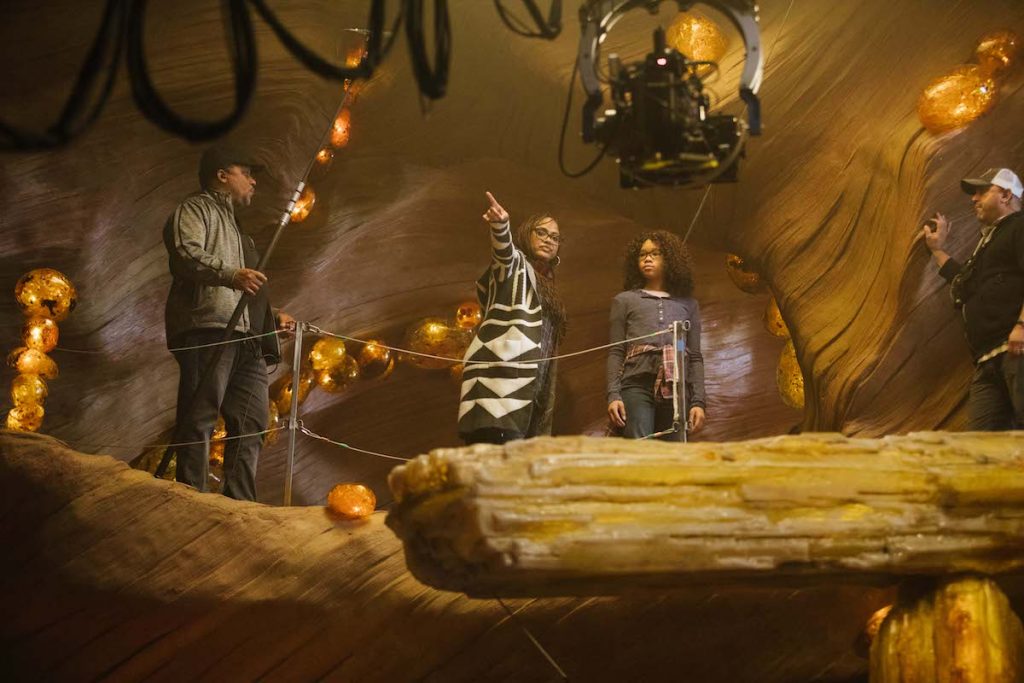 Since its publication in 1962, Madeleine L’Engle’s novel “A Wrinkle in Time” has earned the affection of millions of fans. In fact, many of the people who worked on Disney’s new cinematic adaptation have loved the book for years.

It seems impossible though that any of them have loved the book as much as producer Catherine Hand, who wanted to make it a feature film when she first read it in 1963. At the time, she was in the fifth grade.

Hand even wrote a letter to Walt Disney asking if he would make it into a film but never mailed it. Disney never received the note but Hand’s childhood dream persisted.

When Hand later befriended L’Engle, she began to appreciate the A Wrinkle in Time even more.

The story focuses on Meg, a young self-conscious girl, and her quest to locate her missing father. Meg’s journey finds her traveling through time and space guided by unique beings named Mrs. Which, Mrs. Whatsit and Mrs. Who. The trio sends Meg, her friend Calvin and her younger brother Charles Wallace on an intergalactic trip of self-discovery.

Hand’s affection for the beloved novel eventually led her to produce a TV movie adaptation of the book but she was ultimately let down by that film’s financial restraints.

Now, over five decades since she originally read the novel, Hand has produced the new Disney film, which had the budget and the power to truly bring this story to life. Directed by Oscar-nominee Ava DuVernay, the film features an all-star cast including Reese Witherspoon, Oprah Winfrey and Mindy Kaling with Storm Reid starring as the main character.

I recently had a chance to chat with Hand about her affection for the book, the casting process and how her appreciation for the story has changed over the years.

When did this book first become important to you?

As soon as I read it, I realized how much I loved it. I don’t think at 10 years old, you even understand the word “important” but I knew that I loved it and I thought it would be a great movie. And if I couldn’t get Mr. Disney to produce it, I made [a] promise to myself to grow up and make it.

Why do you think the book is so timeless?

I think there are many answers to that. I don’t think it’s just one answer to that question. If you go back to when it was written, Madeleine was searching for answers about ‘what did she believe about God, what did she believe about her place in the universe’ and I think she wrote that book at a very raw time in her life and it was her personal search for purpose and meaning and I think that we all benefitted from her search…

You’ve been working to adapt this novel for the big screen for a long time. What was the greatest challenge you faced?

I’ve been asked that question and there’s so many different answers but I will tell you A Wrinkle in Time is the quintessential heroine’s journey — which is different than a hero’s journey — and the industry was just not as open to telling that story. It was really when a whole new generation of executive producers, writers, directors rose up and the book —while it may have seemed daunting for many years for a lot of people — I think this new generation of creative individuals in the industry embraced it and I think that at the end of the day, it’s so much about timing and I think as you said earlier its themes are universal and timeless.

Look at what’s happening at this very moment in Florida with these young beautiful articulate teenagers. They are standing up for something that they believe [in] and they believe that they could make a difference and that is absolutely the essence of A Wrinkle in Time so I think A Wrinkle in Time is right now mirroring what’s going on in this country.

When did you feel like everything was coming together for this new adaptation?

It was stages. I think the very first person that made me feel confident that I had a chance at getting it made was when I met Tendo Nagenda. He’s a Disney executive…he was willing to try even though it was difficult [and] even though it had been a challenging endeavor for years. He said, “You know what, I really want to make this happen.” He loved it. Then he introduced me to Jim Whitaker and that was another really important piece because Jim has spent decades producing movies and I had not, so I needed him to bring all the parts of this incredible machine together and to keep it moving forward. But I think for me when I had that emotional “oh my god this might happen” [moment] is when I first met [screenwriter] Jennifer Lee. Jennifer loved the book exactly the way I did — from a child’s point of view — and she’s a wonderful writer, a brilliant mind. When we read her very first draft, I really felt like she had captured Madeleine’s voice and the spirit of the book. What really tipped it over… was when we met Ava DuVernay.

No matter how much you love a property, no matter how much you want to get something done, you have to find the right director. Nothing happens without the right director and you can say that about all the pieces. You cannot do a movie unless you have a studio or someone backing you who believes in it as much as you do because it’s a very tough going to get something done. So we had Disney, we had an experienced producer in Jim, and then Jennifer Lee who was an incredible outstanding writing talent and who also loved the book in such a deep and profound way, and then finally we had this magnificent force called Ava DuVernay who signed on to direct it.

In the casting process, when did you realize you made the right decision in casting Storm Reid?

The moment we saw her audition tape. It was very funny because several of us had seen the audition tape and each one of us—most especially Ava, but Disney too — we just kept comparing everybody to Storm Reid. I think for me, it was cemented when I met her because she was such a gracious, loving, grateful young woman and I knew [she] could bring this beautiful, wonderful character to life. What really really was essential was this marvelous relationship that Ava had with her. She really helped Storm find the character and I think Storm really trusted Ava, so it was a terrific collaboration.

How has your appreciation of the story changed over the years?

I have loved this book for so many years and I found that what happened to me is exactly what Madeleine L’Engle has said. The book has meant different things to different people at different times in their lives, and that was absolutely true for me. When I was a child, it meant one thing. It was this great adventure of a young girl in search of her missing father, and then she’s the one that saves the day [doing] something that he can’t do. I loved that as a little girl. But then when I met Madeleine and spent the last twenty years before she died talking to her about the characters, I really began to have a much deeper understanding of Madeleine’s search for meaning and began to realize, ‘Oh my gosh, it [also] influenced my own search for meaning and purpose.’ And then I think as a mother, I read it from a point of view of having these three children and wanting them to read this book because the book embraced so many things that I thought were important to know to be a good person.

It was kind of a road map to being a good person, but here’s the funny part—when I was on the plane coming to Los Angeles to meet Jennifer Lee for the very first time, I read the book again, and felt something new. The thing that was so beautiful is that I read it and I saw the book completely from Mrs. Which’s point of view—a point of view that I had never seen before—and I’m sure it’s because of my time in life and once more, I was just mesmerized by a book that could mean so many different things to me throughout the course of my life. If it means so many different things to me, I’m sure it’s the same for many people who love the book.

Featured image: Ava DuVernay and Storm Reid on the set of Disney’s A WRINKLE IN TIME. Courtesy Walt Disney Studios.