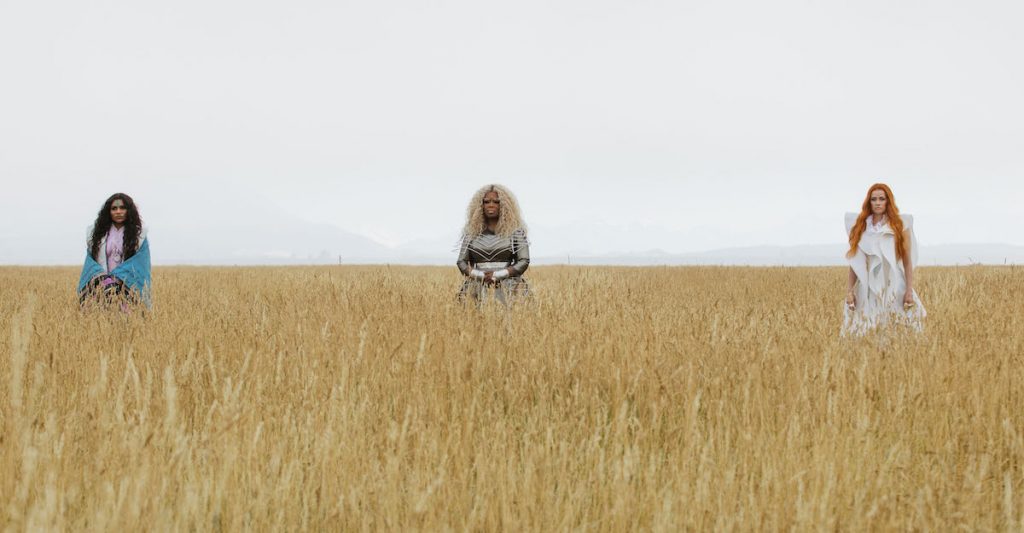 Oprah, Reese and Mindy Talk A Wrinkle in Time

Women take the reins for A Wrinkle in Time (opening today) both on screen and behind the camera. Frozen auteur Jennifer Lee adapted novelist Madeleine L’Engle’s 1962 time travel fantasy for director Ava DuVernay. She in turn enlisted Oprah Winfrey to anchor a powerhouse cast featuring Reese Witherspoon, Mindy Kaling and 14-year old newcomer Storm Reid as the time-traveling heroine charged with saving the universe after her scientist father (Chris Pine) disappears into a fifth dimension wormhole. The stars aligned last month at W Hotel in Los Angeles to talk about good vibes, astrophysics, New Zealand and hanging from a harness in front of a green screen for the first time.

“It fills my heart every time I think about Ava and her dreads and her sneakers and these big cranes and all of these men running around taking direction from her. To see Ava orchestrate all of that, it touched the part of us that recognizes, ‘Oh yeah, we can do this.’ We’ve always been able to do this.’ The whole process has just been one big delight.”

On her trip to New Zealand

“When I heard Ava was going to film A Wrinkle in Time in New Zealand, I told her, ‘I’m going. I’m just gonna go hang out with you for however long it takes, I’m gonna block it on my schedule, I’m gonna be there, I’m gonna watch you shoot and say ‘Action!’ So Ava says ‘If you’re serious, why not take a look at the script?’ And I go, ‘Okay, I’ll do it.’ I didn’t even know what it was. I just told Ava I’ll do it.”

“Ava doesn’t just make a movie, she makes an experience for everyone. A Wrinkle in Time was like a master class in how to be a thoughtful filmmaker and a real visionary. To stand next to these women I’ve admired for so long and talk about what we wanted to impart to a young woman today, right now — that was an extraordinary experience.”

Coming off her comedy series The Mindy Project, writer-actress Mindy Kaling takes a turn for the dramatic as A Wrinkle in Time‘s multi-cultural spirit guide Mrs. Who.

“I’m a sitcom actress but Ava saw something in me when we met at a party for Malala Yousafzai. Ava, Malala and I were the only three women of color at this big party. After I finished talking to Malala to my left, I was like, I really want to talk to Ava. We had a great conversation and I thought, ‘Our genres are so different, we’ll never cross paths,’ and then this happened. I’d wake up every morning and spend four hours in the makeup trailer with Zach Galafanakis, whom I know because I took his online acting course. This movie was more drama than I’m used to, and Zach was so encouraging.”

“I loved science fiction and fantasy growing up but it did not love me back. I never saw any representation of a dark-skinned Indian woman or Indian girl in anything that I saw.

TV was so welcoming to me, and comedy is so welcoming to me, but to be on a green screen stage in harnesses doing a science fiction fantasy movie, I finally felt welcomed with open arms to [a genre] that had ignored me completely. If this movie can be something that the miniature version of me could watch and be excited by, I think that’s a huge thing.”

Ava DuVernay made the switch from movie publicist to movie director when she helmed Martin Luther King bio-pic Selma followed by Oscar-nominated documentary 13th. With A Wrinkle in Time, DuVernay becomes the first woman of color to direct a movie budgeted at more than $100 million.

DuVernay on giving kids a “breather”

“We’re living in a chaotic time as adults. Imagine the tension you feel if you’ve only been on the earth for 10 years or 11 years? We want this film to give [kids] a little breather and say ‘Who you are is enough and you’re gonna make it through by finding something in yourself that guides you.’ Because we all have that little voice inside of us, and a lot of times we don’t listen to it.”

On the battle between light and darkness

“There’s love in every frame of this movie. My films are my children, they’re what I leave behind, they have my name on them, they have my blood in them. With A Wrinkle in Time, we’re trying to give a little bit of sweetness to the world in these dark times. In a lot of ways this movie saved me from kind of going down dark holes so I’m grateful for the years I spent working on A Wrinkle in Time. It kept me in a light-filled place.”

Chris Pine starred in Star Trek Beyond and Hell or High Water before taking on the Wrinkle in Time role of maverick astrophysicist Alex Murry.

Pine on acting with kids

“Working with young adults, their BS meter is so sharp. I remember one kid, the moment I said something he didn’t believe, he just walked off camera. As an actor you build a bunch of tricks and if you get lazy, you can sort of throw them out. But kids, they’re like metronomes. They just keep you right there.”

On finding his inner child

“Everybody’s talking now about ‘hardening’ schools. You want to take the most beautiful, supple creatures on the planet – children — and you want to harden them? In this movie, my character has become so rigid that he forgets Meg, this beautiful, blooming flower of a daughter. He forgets that she’s the prize. Property or money, none of that stuff matters. So that moment when Alex and Meg meet, it’s like this man’s finding his inner child and remembers everything that’s beautiful about being human.”

English actress Gugu Mbatha-Raw had the title role in Belle, then appeared in Beauty and the Beast before playing Dr. Kate Murry.

Mbatha-Raw on astrophysics and the Jet Propulsion Lab

“Ava introduced us to this wonderful astrophysicist named Stephon Alexander. He wrote an incredible book, The Jazz of Physics, so Chris and I talked to him about what goes on inside his mind and what it might take to pursue some of these [time travel] theories. We also visited JPL [in Pasadena, California] which was fun. I was drawn to the fact that Dr. Kate and Alex are obviously a love match and they’re also intellectual equals. That’s sort of the spark and the pioneering spirit that keeps her hope alive when he’s been gone for so long.”

Fourteen-year old Georgia native Storm Reid appeared in 12 Years a Slave and now drives the action in A Wrinkle in Time as the scientists’ intrepid daughter Meg Murry.

“My dad has not been missing for four years and thankfully, I’m not getting bullied, so I didn’t really know how to translate that to all the situations Meg’s going through. When I stepped in her shoes I just tried to relate that back to my own life and my relationship with my dad. He and I are very close so thinking about him being missing for four years helped bridge the gap of how I would feel if that happened. Also, working with Mr. Chris — he was so focused and intense, I really felt the connection and felt the pain and the love. I just tried to become Meg.”

Featured image: Oprah Winfrey is Mrs. Which, Reese Witherspoon is Mrs. Whatsit and Mindy Kaling is Mrs. Who in Disney’s A WRINKLE IN TIME.