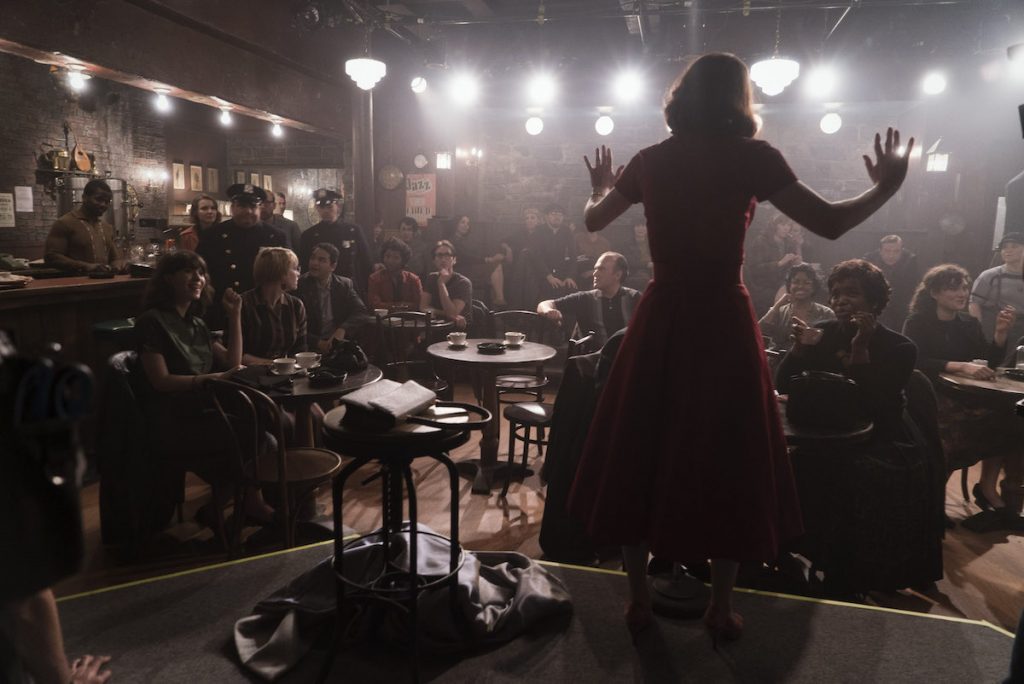 Production designer Bill Groom doesn’t remember much about 1958. After all, he was just eight years old when the feisty and fictitious Midge Maisel roamed the streets of New York. So when Amy Sherman-Palladino and her husband Dan Palladino asked him to conjure mid-century Manhattan for their Amazon period piece comedy The Marvelous Mrs. Maisel, which started streaming on Amazon earlier this month, Groom did what he always does: research. Lots of research. Groom, who won four Emmy awards for designing 1920s-era Atlantic City in HBO’s Boardwalk Empire crime drama (read our interview with him about that here), says “I always start with research and everything grows out of that.”

Speaking from Paris, where he’s already working on a season two story arc set in France, Groom adds, “When I did Boardwalk Empire, we had well over a million pages of research by the time we finished, and for Mrs. Maisel, we’ve now got thousands of photographs of various places in New York City. Once you start acquiring stuff, it becomes an ongoing process that not only gives you a factual basis for what you’re doing and also inspires you to try things you never would have thought of on your own.”

Groom signed up for Mrs. Maisel mainly because he liked the pilot episode’s sharp writing from Gilmore Girls creator Sherman-Palladino. “Amy’s not the easiest person in the world to work with because she expects so much from herself and expects that same kind of effort from everybody else,” Groom observes. “She’s very hard to keep up with, but we all love her, and Dan as well, because it’s great to have someone who challenges you creatively.”

For The Marvelous Mrs. Maisel, Groom’s challenges included the re-creation of a historic Greenwich Village hangout known as the Gaslight Café. There, wise-cracking Jewish housewife and mother of two Miriam “Midge” Maisel (Rachel Brosnahan) gets drunk after her husband splits and stumbles into stand-up comedy with an impromptu routine about her marital woes. The basement club, re-created on a soundstage at Brooklyn’s Steiner Studios, attracted poets, comedians and folk musicians as previously depicted in the Coen Brothers’ 1961 drama Inside Llewyn Davis. “We did as much research as we could on the way the Gaslight was decorated, if you can call it that,” Groom laughs. “At the time it was the smallest club in the city, I believe, so we pushed that a little bit to get some elbow room. I used brick and stone textures that were typical of these clubs and added wooden paneling, trying to keep the atmosphere and tone.”

Contrasting with the cramped, dimly lit Gaslight Café is the upper west side “Classic Six” that Midge initially calls home. Incredibly spacious by modern standards, the six-room, 3,500-square foot apartment took stylistic inspiration from old Doris Day movies, while the colors come straight out of vintage hardware store paint samples tracked down by Groom’s team and tacked up on the walls of the production office. Groom says, “Today Benjamin Moore and Sherwin Williams probably have thousands of colors, but the leading paint companies in 1958 only had about three dozens colors and that was pretty much it. We used those paint swatches to focus on the palette, which included lots of pastels and also some dark chocolate colors. It’s not something I imposed on the show. Those colors were just true to the period.”

Groom’s most elaborate Mrs. Maisel makeover in season one involved his transformation of an old bank into a period-perfect B. Altman department store stocked with Elizabeth Arden and Revlon makeup as backdrop to Midge’s new job as a cosmetic sales clerk. “The department store turned into a very big undertaking because those product boxes don’t exist any more,” Groom explains. “You might find two or three, but you’re not going to find 200 products from 1958 sitting on a shelf somewhere.” The solution? “We got permission from the make up companies to reproduce boxes from that period and actually manufactured all the packaging ourselves,” Groom says. “Whatever the project, my job is to figure out what needs to be done, and then do it.”

Groom brings a unique perspective to 1958 Manhattan since he also designed the record business psychodrama Vinyl set just 15 years later. “Vinyl in a way relates more to Boardwalk Empire because culture goes through this process of old rules, no rules, new rules,” Groom says. “Both the twenties and the seventies were a time of no rules, whereas the fifties was this period of old rules that later gave way to no rules in the late sixties. By 1973 you had a completely different energy in the city compared to what we see in Mrs. Maisel.”

In its depiction of pre-feminist American culture in the late fifties, The Marvelous Mrs. Maisel seems light years removed from contemporary life, yet Groom says much of New York City’s physical environment remains essentially intact, especially in Greenwich Village. “We discovered that a lot of places in downtown New York looked very similar to the way they look today, if you take away the modern storefronts. You could walk right onto that set of Gaslight Café and feel very comfortable. And I think it’s important for audiences to feel comfortable.”