Bill Groom is a three-time Emmy winner as production designer on HBO’s series Boardwalk Empire. He’s now been nominated a fourth time for his work for the last season of one of the most ambitious mob-centric TV show in history. Centered on the rise of gangster and would-be credible businessman Enoch "Nucky" Thompson (Steve Buscemi) in prohibition-era Atlantic City, Boardwalk Empire offered a panoramic vision of the power players vying for control of the liquor trade and more, from Chicago's Al Capone to New York's Lucky Luciano and Meyer Lansky. Season five was set partially in Cuba, where Nucky was attempting to set up a legitimate liquor distribution network for an America he knew was soon ending its misguided attempt to stamp out booze.

Groom’s work has been seen on the big screen, including in films Eat, Pray, Love, and Gus Van Sant’s Oscar-winning film Milk, and next he’s taking on HBO’s 70’s rock drama Vinyl, from Boardwalk alums Martin Scorsese and Terence Winter.

We talked to Groom about how he helped create prohibition-era Atlantic City, Havana, Cuba and more in a show that featured exquisitely crafted (and often massive) sets in New York City.

Let me first ask quickly about Vinyl—I assume you can’t tell me much?

Yeah, all I can say is I’m designing Vinyl right now, we’re in the middle of the season, and we’re having a lot of fun.

Where is the work being done?

We’re based at Steiner Studios in Brooklyn, same place as Boardwalk. We’re still very much in the process of the inventing it.

Let's talk Boardwalk. How does it feel to be nominated for a fourth time for your production design work on the show?

First, what I'll say is, man, Terry Winter, I love his writing, and it is more similar to feature writing than it is any television you see. Standard television, conventional television, there’s a formula, you’re four days on the set, four out, and you have a certain formula. We don’t follow that. Everything is custom made, bespoke, for every episode, and that’s one of the things that made working on Boardwalk Empire exciting, because it’s not conventional television. And it’s much more like doing a feature every two weeks. 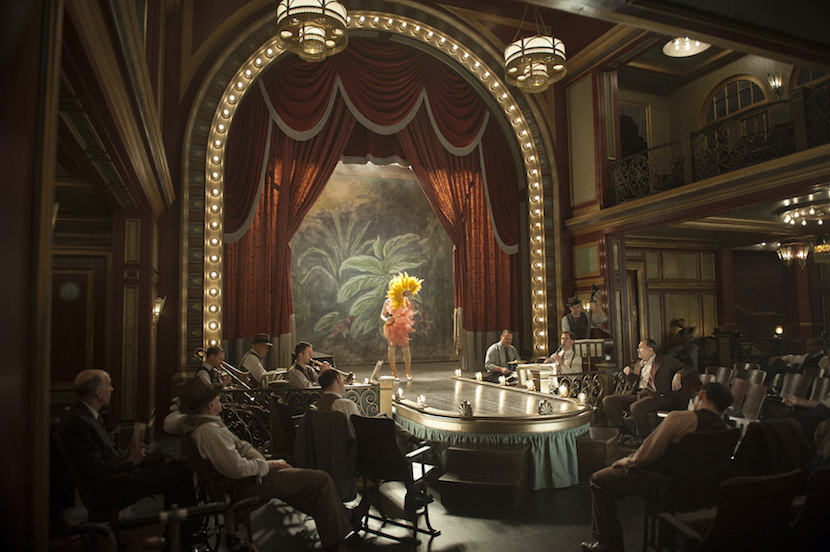 Tell me about building season five, which had a lot of Havana, Cuba scenes, along with Atlantic City and Chicago.

I would say season five was the most challenging because we opened the season with Cuba. We considered shooting in the Dominican Republic, we considered shooting in Puerto Rico, where we scouted, but in the end I think we were able to capture 1920s Cuba here in New York in a way we might not have been able to in those other places.

Part of it is the availability of crew, materials, our whole film infrastructure. What you look for is not only the perfect location, but a place that can become whatever it has to become according to the script. So it’s not just me looking for a location, it’s also what the director’s vision for the script is and how the script evolves those locations over time. I think we were better able to serve the script in New York.

How did you replicate 1920s Havana in New York?

Partly it was a matter of looking for the architecture, and there is architecture in New York that was built at the same time that Cuba was becoming this amazing place. One place we found was at 1 Center Street, at the Manhattan Municipal building. There’s a cobblestone street with columns which looked much like the research we did of Cuba a the time. 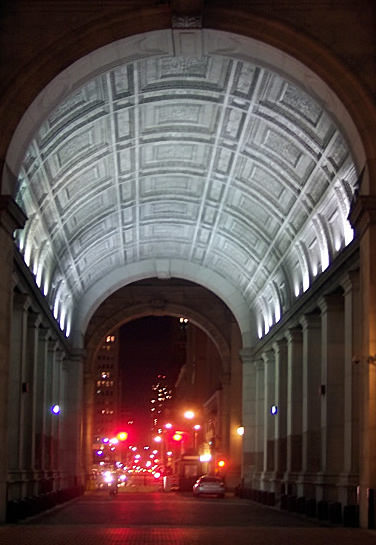 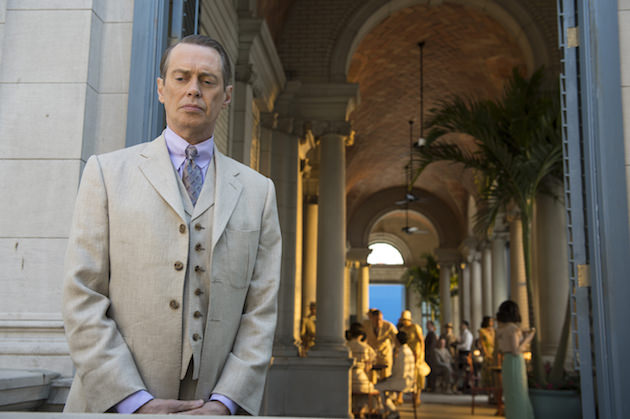 How many sets are you designing per episode?

What particular flourishes were required for re-creating 1920s Cuba?

We brought in palm trees from Los Angeles and Florida, and we did a fair amount of construction to get the details right. We shot at the Hispanic Society, also referred to as Audubon Plaza. It’s not a very well known museum in the city, and part of the complex is this huge plaza that has a fountain and a sculpture. With the help of visual effects, we were able to put the old cars in places that we’d never be able to. Then we just went to work creating the look of Havana, and it just so happened that the buildings surrounding the plaza were perfect for Cuba. We brought in a dozen palm trees that were a combination of trunks that were sculpted from trees sourced in Los Angeles and then live palm fronds we had shipped in from Florida. So we had the palm fronds moving in the breeze, which added a lot to the feeling. A lot of people who were insiders in the business were scratching their heads on how we did that. 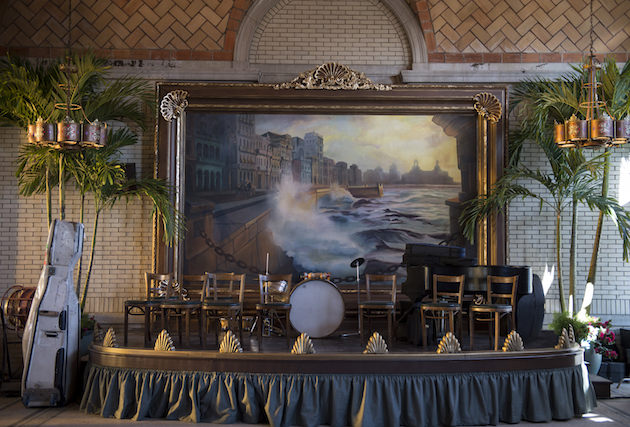 There were a lot of bar scenes in season five—the beautiful hotel bar and Sally Wheet’s (Patricia Arquette) bar Rubia Sucia (dirty blond)—where were these filmed?

The bar location we actually found in a parks building in Prospect Park, in Brooklyn. It’s an old tennis pavilion, all covered in tile, the architecture was right, so we actually ordered a big truckload of louvered shutters that go from floor to ceiling, about 18-feet high. That was something I was looking for, a very dramatic scale for this bar so it felt right, and those were built in South Carolina and shipped here. 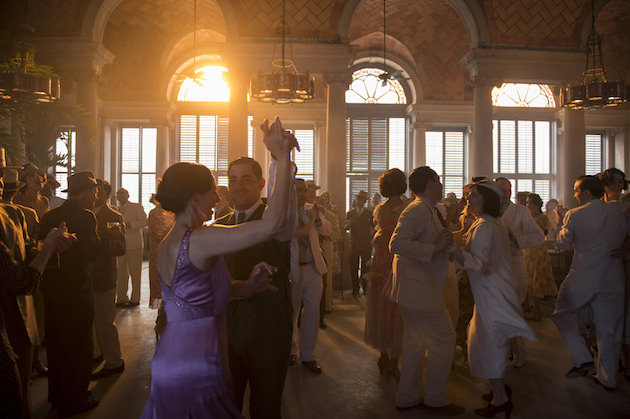 Did you have everything built?

Not everything. I love working with found objects, and Sally’s bar was a large, ornamental bar that I found in a salvage place in Brooklyn. It had come out of a building in Park Slope. Where the windows had been I put shelves. It’s sort of a Frankenstein piece.

Season five included a lot of flashbacks to the very beginnings of Atlantic City, where the boardwalk was just being built…how’d you manage to have these different versions of the show’s most crucial location?

It was quite complicated creating the boardwalk for 1868, 1897 and 1931. The buildings built in 1868 were still there in 1897 and 1931, and I had to figure out what the progression of the buildings looked like over these years, so that determined when we shot. For 1868, we ordered a frame from a company in Connecticut, so in 1868 you see a building next to the Commodore’s hotel being built, then by 1897 it’s finished with windows and doors and all that. We ended up really building three boardwalks in one, and it was almost twice as long as the one in the pilot season [which was nearly 400-feet long], so it was quite a lot of real estate to shoot on it. Then again, it was a playground for the directors and actors. 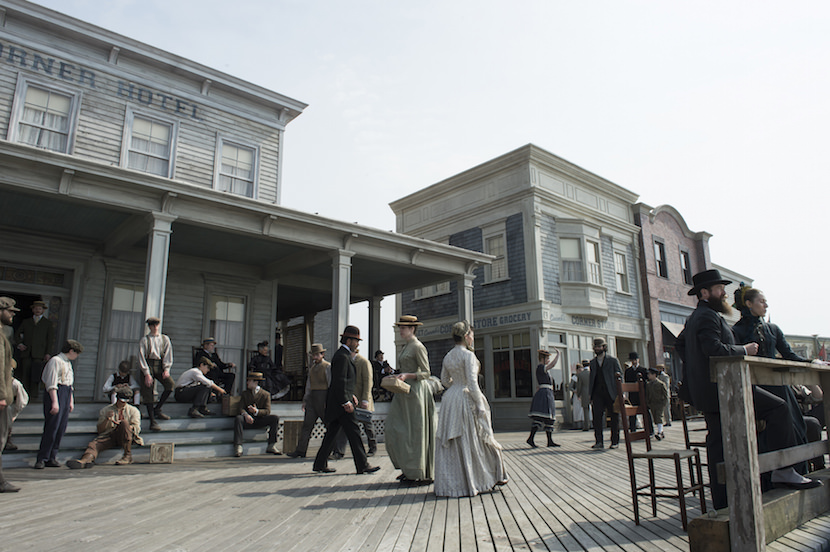 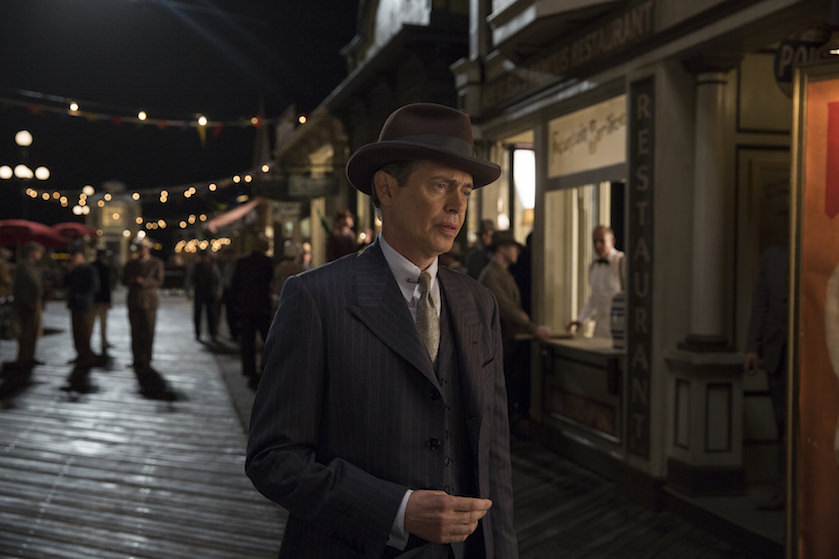 The original boardwalk was built in a studio in Greepoint, Brooklyn, but then you built one outside, actually on the beach in Far Rockaway—how’d that effect filming?

We built a very small piece of the boardwalk out in Far Rockaway, and what we learned from that is you just can’t duplicate the atmosphere. Just the lights off the water, the sea air—it seemed to effect the actors. They just seemed to love being right there at the water, looking out at the sand, which we dressed with umbrellas and cabanas, so even though the set was quite small, the rest of the buildings we did with VFX, there was something you couldn’t quite capture any other way.

Did you guys save any of this stuff?

We didn’t—we tried to dispose of things responsibly, and we hired a company that recycles lumber for the things that had been constructed. By the time we were finished we had a 55,000 square foot warehouse packed with furniture and drapery and floor coverings and lighting and teacups, you name it, we had it, stacked on four levels. We had a big industrial shelving system where we stacked sofas, four high, with a system so we could access it. And everything we built last season was bar coded, so that was sold in stages. First HBO had their right of first refusal for their other shows. Decorators from the others shows came in, a fair amount of stuff went to The Knick, then set decorators from other networks came, so all this stuff it made it’s way to other shows. Then there was a crew sale, and after that came in the antique dealers…those sales took about a month. By the end of all of that, whatever was left we gave to charity.

You’ve bet at this a while now…how does it feel to get this recognition at this stage of your career?

I just turned 65, I won my first Emmy ever for work I did after I turned 60, I won an Emmy at 61, 62…it all happened after 60. That’s okay. Some people peak early and it never gets any better. I’m an up and comer at 65. I don’t have any desire to stop doing this anytime soon. I’m working with Mick Jagger and Marty Scorsese and Terry Winter…it’s something people would be happy to do at any point in their lives.

Do you feel like you’ve got some advantages being your age?

In a funny way, yeah. We work really fast on these shows like Boardwalk and Vinyl, and you have to be really decisive. I’m more decisive now. People think that when you’re older, you’re automatically slowing down, but in fact, what our brains do when we’re making decisions, as we make a hundred decisions a day doing what we do, large and small, our brain immediately scrolls through any similar experience we’ve had, so as people get older, they’ve got a lot more to sort through. The brain’s not working slower, it’s just doing more. There’s hundreds of thousands of dollars riding on these decisions you make.

You worked for Saturday Night Live way back in the day—what was that like?

I was an art director at SNL for 6 years, from 1978 to 1984. That was very a chaotic world, but, the same crises at the same time on the same day every week, so you prepared for the moments when the scenery wasn’t there and we were going to be rehearsing in an hour. SNL was very high pressure. We got the scripts Wednesday afternoon, we went live Saturday, and we built the setting and scenery between those times. That was such a great experience for me. I remember repainting a set during the warm up for the show, with the audience sitting there. That was kind of the pressure you were under at SNL.

What have you learned about working on prestige TV shows?

I’m very protective of not doing very much that first day with the director, talking in very broad terms about the script, and then you start looking. The temptation is to hit the ground running. There’s an old saying, ‘never mistake movement for progress.’ Knowing what to do is more important than starting to do it right away. We can always make up the time once we know what we’re doing. Occasionally you do start down a bad path and you have to have the flexibility to step back and say, is this the best thing for the show?