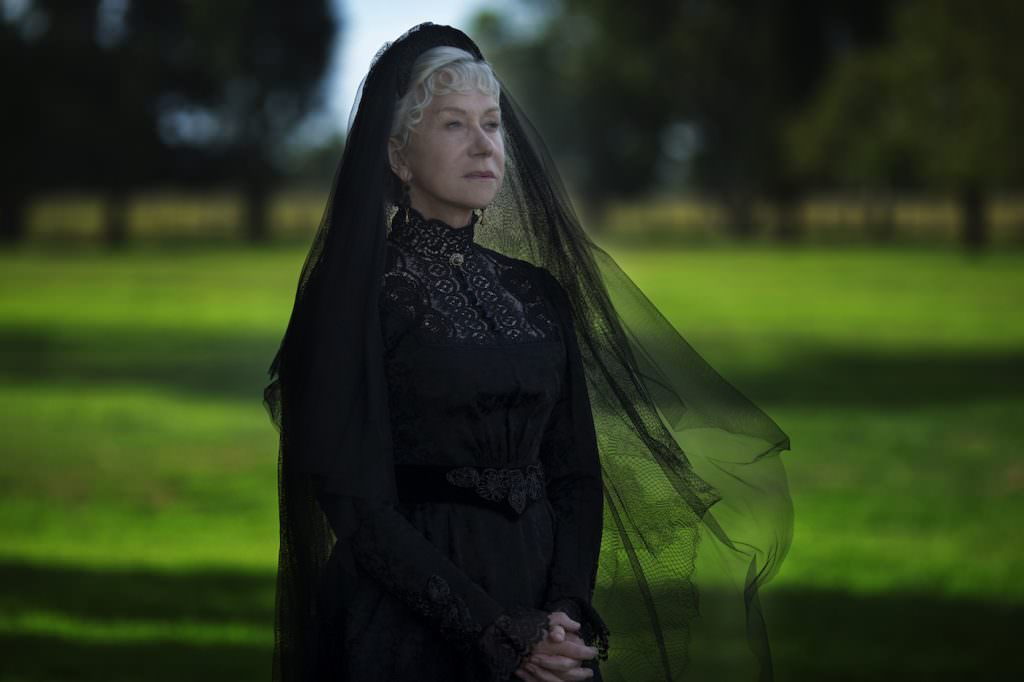 Writers/Directors The Spierig Brothers on Their Deliciously Detailed Horror Winchester

What makes an enduring haunted house classic? Much can be said for dread-inducing camera work, eerie sound design or clever ghostly effects, but for the Spierig brothers, it’s the human story underneath that can transform a horror flick from simply scary to downright legendary. Enter Winchester, a dramatization of the curious true-life mystery of Sarah Winchester and her fascinating, illogical home known as the Winchester Mystery House. And while the details of the true story are sketchy at best, her story is so studded with bizarre specifics it’s a wonder Winchester is the first big screen adaptation of the historical figure’s story.

The legend goes something like this: after the passing of her husband William Winchester (of Winchester rifle fame), Sarah Winchester became slowly overcome by guilt due to the rifle’s deadly legacy. Seeking a psychic to alleviate her shame, it’s rumored she was instructed to move west and begin construction on a house. Construction that, if it never ceased, would prevent Sarah Winchester from suffering the same fate as her late husband. As a result, or perhaps incidentally, work began on the house, and would reportedly run for 24 hours a day, 365 days a year, for the next 20 years. It’s a shiny oddity of a true story, and now, the Spierig brothers are bringing the Winchester mystery to the big screen, with a few high stakes horror twists. The film opens on February 2nd.

The Spierigs – twins and genre filmmakers who built their name on indie darlings like Daybreakers and Predestination – first learned about Sarah Winchester like many do: on television. “It must have been like a Discovery Channel or History Channel thing. Ghost Hunters or one of those stories that had been around,” admitted Peter. “We were familiar with it, but certainly not in great detail, being from Australia. Then we read a script that Tom Vaughan had written, which really got us very intrigued.”

But it wasn’t until the brothers arrived at the house – a meandering, Victorian mansion famous for staircases that lead to nowhere and doors that open out onto nothing – that the direction of Winchester really began to gel. “We went to the house and fell in love with it,” Peter gushed. “What we initially loved was the unique architecture and the design, we thought it was quite extraordinary, nothing quite like it. And then we started to dig into Sarah Winchester, and we were totally fascinated by her and who she was and the inventive nature of who she was, and so we kind of really dug into all of that and then Michael and I went back and wrote our version of the script and rewrote the material having gathered all of that.”

Little is known about Sarah Winchester that isn’t tinged by legend or superstition, and only one photograph is known to exist of the heiress. But the Spierigs took the ambiguity of her life as an opportunity. “We did our own research and found out as much as we could,” Michael told The Credits. “The interesting thing from researching is that Peter and I both came to the conclusion that we don’t think she’s crazy, we don’t think she was this out there, strange recluse. We kind of feel like she was a woman that was in mourning. She lost her husband and her daughter, and she never got over it. Plus she felt she was haunted by all the deaths of those killed at the hand of the rifle. So she had a lot of guilt, as well. But I also think she was quite a progressive woman. She loved to build, she was well educated and she had the opportunity with that money to explore her passion, building. And she bought that farm property in San Jose and kept expanding and expanding. She was very progressive in that she had modern amenities like a shower, like a telephone, electric light switches, electricity. She was pioneering an irrigation system, she had a farming business. She was a very independent, intelligent woman. That’s what we gathered from the research we did.”

As the namesake and heartbeat of Winchester, it was imperative the Spierigs find a perfect Sarah to lead their film. “Michael and I, very early on, talked about who could play the role of Sarah Winchester and we both immediately said it would be amazing if Helen Mirren would do it,” Peter revealed. “We thought the spirit of Sarah Winchester was something that Helen would really gravitate towards, which she did. The thing about this movie too, it’s not a blood and guts horror film, it’s a thriller, if anything. And it’s a scary movie but it’s also a movie about grief and about people that are dealing with loss and also the repercussions of a great fortune that is made at the hand of violence, essentially. So I know Helen was attracted to all those sorts of aspects of the movie. And we took the script out to her and she immediately reacted, which was fantastic. And that kind of immediately set the tone of the quality of the type of movie we’re trying to make.”

It’s a unique role for Mirren, whose resume is dotted with a handful of thrillers and more than a few period pieces, but Winchester’s decided horror bent makes the film a notable outlier for the legendary actress. Still, she wasted no time in making the role her own, particularly when it came to the titular character’s costuming. “Helen had notes,” Peter told The Credits. “We sort of presented her with ideas, our costume designer Wendy Cork had designs, all these options. And we sent them to Helen and she immediately reacted positively to it.She had a big influence over it, but it was immediately, we were all in the same place.” As it happens, Mirren also helped cast the role of her niece in the film, played by the underrated Sarah Snook: “Helen actually said that this girl is amazing, can she play my niece in Winchester? It was a real thrill to call up Sarah and tell her that Helen had asked her to play her niece. She was thrilled.”

Of course, when it came to shooting the film, the house’s iconic twists and turns (and modern quirks) prevented the Spierigs from shooting too much of the film inside the actual Winchester mansion. “We shot some scenes in the actual house,” Michael told The Credits, “but the tricky thing about the house, apart from the fact that San Jose has changed a lot in 100 years, [is that] while it’s a popular tourist attraction, it has certain amenities like sprinkler systems and exit signs, so it does become very tricky to shoot. But we shot as much as we could there. What we did do is we recreated some rooms very accurately on a soundstage in Australia. In fact, scale accurate in Australia. When you see the movie, you can see the rooms in the film and then you can actually go to the house and see the rooms. I think that’s a rare thing in a movie, that you can see a room and then actually go and experience it. So, when you watch the film, the house is represented as accurately as we could.”

And while the house itself helped to set a framework for the film’s period aesthetics, the Spierigs also were sure to make reference to the Hammer horror movies that helped shape their creative sensibilities. “That was definitely a tone that we were inspired by,” Michael revealed. “The house is largely Victorian architecture, but she was so eclectic in what she collected, the mish mash of art that she loved at the time. We wanted to make a classic haunted house movie. We tried to make it still feel quite modern to explore a classic haunted house feel.”

There’s substance with the style too: Winchester handily ticks every box of a gamely genre thriller, complete with breathless setpieces and nightmarish visuals, the kind of inventiveness that makes clear the Spierigs’ affinity for horror. “It’s endlessly creative,” Michael said of the genre. “There’s no rules and it’s full of all different types of possibilities.”

Still, for all its spirited innovation, the Spierigs are careful to underline the film’s dark and plainly violent core: “When we heard about the story and the nature of the Winchester rifle and what it actually did, we were certainly fascinated by that and were very much aware of what that meant in terms of making the movie,” Peter told The Credits. “It wasn’t by accident that the movie has a story to tell about the Winchester rifle and its impact on warfare. This is a woman who is haunted by the death of people at the hand of this rifle. We wanted to tell that story.”