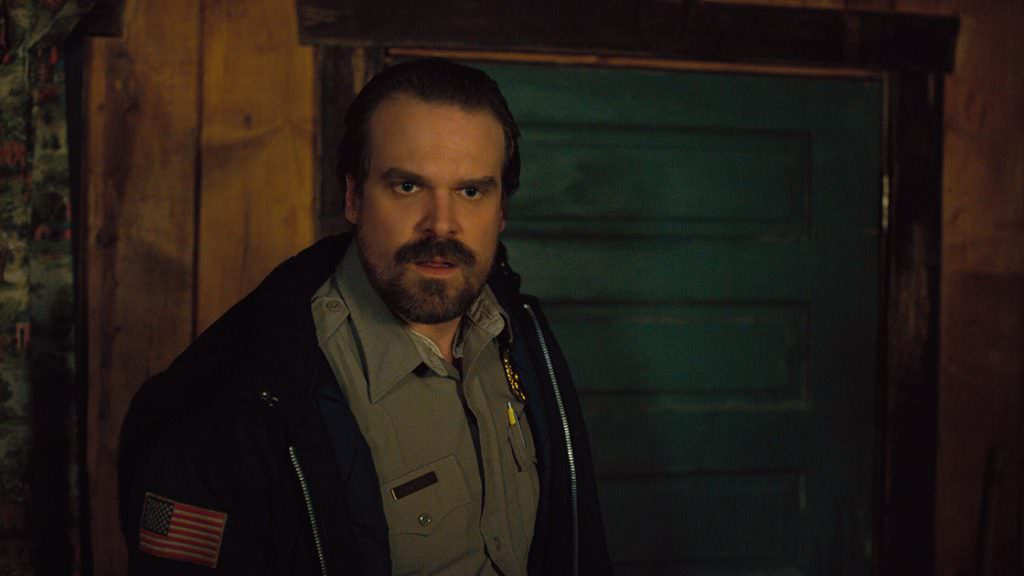 Could David Harbour Be the Next Indiana Jones?

David Harbour is really living our best life for us. He’s the Golden Globe nominated smoldering savior of Hawkins in Stranger Things, he’s making all our dreams come true rebooting Hellboy, and his Twitter game is the strongest. Collider caught up with Harbour for a fantastic post-Hellboy shoot interview and the revelations are super exciting. Harbour seems to be at the center of the coolest projects on screen right now.

Possibly most exciting is the prospect discussed was that Harbour would be interested in donning the fedora for an Indiana Jones reboot. Fans have been calling for the recast online, and the actor says he’d be all for it. A 5th film in the Harrison Ford series is still on the way, but is now expected to be released in 2020. Maybe he’ll pass the whip in the next film?

“There was some joking online, six months or a year ago, about rebooting Indiana Jones, and I would love to reboot Indiana Jones, if he was bipolar and a little bit fat and spent too much time grading papers. I would like to add some darkness to the really fun cinema that we have.”

Harbour has plenty to focus on with confirmed projects he already has in the works. After season 1 of Stranger Things aired, Upside Down mania hit. Harbour, along with Finn Wolfhard, Millie Bobby Brown, Gaten Matarazzo, Caleb McLaughlin, and the rest of the cast became overnight stars. Winona Ryder, who already had an iconic career under her belt, entered a new era as an artist. Harbour revealed the show creators even considered moving on to a new storyline when the show was renewed.

“First of all, when it did hit so big, and then they announced that we were coming back, there was a lot of talk about it being an American Horror Story type of thing. I felt like we really completed an arc of these characters’ lives and did this beautiful thing, and if we ever went back, it had better be for a reason and not just to play the hits again.”

Harbour admitted that the pressure for season 2 was immense, but has given him confidence for future seasons. Now that the series has explored more of the Stranger Things universe, Harbour sees more opportunities ahead.

“Season 2, to me, is the big sophomore slump hurdle…I just trust these guys. The idea is to do four or five seasons, the Duffers have said, and I feel like, if we can do Season 2, we can do 3, 4 and 5 with no sweat. Right now, the world is so open. Hopper, at the end of two, kind of adopts Eleven, and the Upside Down still exists, even though we closed the gate. There’s just so much story there, with the tension with Joyce, his adopting of Eleven, and his relationship with all the kids, even the teens, and then you have all of these backstories… I see it as an open buffet, as opposed to a burden. We can now feed you so much stuff ‘cause we opened the world.”

Harbour promises that Hellboy will be action packed and revealed how physically taxing the role was. One thing is for sure, this is an actor who likes to go all out for his fans.

“It was the hardest shoot I’ve ever done, primarily because there are just so many stunts in it. It’s a very action-packed movie. There’s a lot of story, too, and a lot of big scenes, but there’s a lot of action. There’s a lot of me running around, jumping and turning, and punching stuff.”

The ultimate transformation into Hellboy looks incredible, and Harbour said it was no small feat. The makeup required dozens of applications each day. He may not have been a fan of the process, but it is well worth it in the end.

“In terms of the make-up, that was not that fun. I will say that I got to a weird place with it. I think we had 70-plus applications of make-up, which is a full mask. By day 30 or 35, I’d wake up in the morning and look at myself in the mirror and everything was blurry. And then, I’d sit in the chair and for an hour and a half or two hours, they’d apply that face. Then, I’d look back up in the mirror and be like, “Oh, there I am!” I started to associate my own image with that other face.”

The entire interview is great and well worth a thorough read. Harbour has a serious career ahead of him and we’ll be there every time he releases a new project.