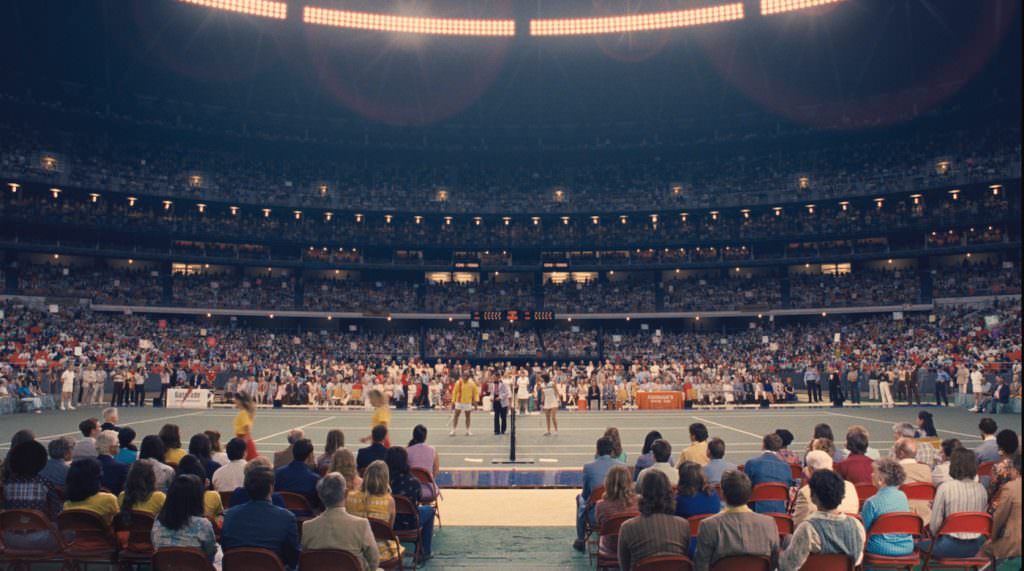 Production Designer Serves up History in Battle of the Sexes

Oscar-nominated for her production design on American Hustle, which takes place in 1978, Judy Becker also designed The Fighter (set in 1976), Feud (1962) and Hitchcock (1960). Now she’s brought her retro touch to Battle of the Sexes, focused on Billie Jean King (Emma Stone) as she discovers her own sexuality in the run-up to her historic 1973 tennis match against self declared “male chauvinist” Bobby Riggs (Steve Carell). Becker says, “I feel lucky because if you’re going to be typecast as a production designer, the ’60s and ’70s is a pretty good period to be typecast. So many changes were going on in society and you see that reflected in the objects and color palette.” 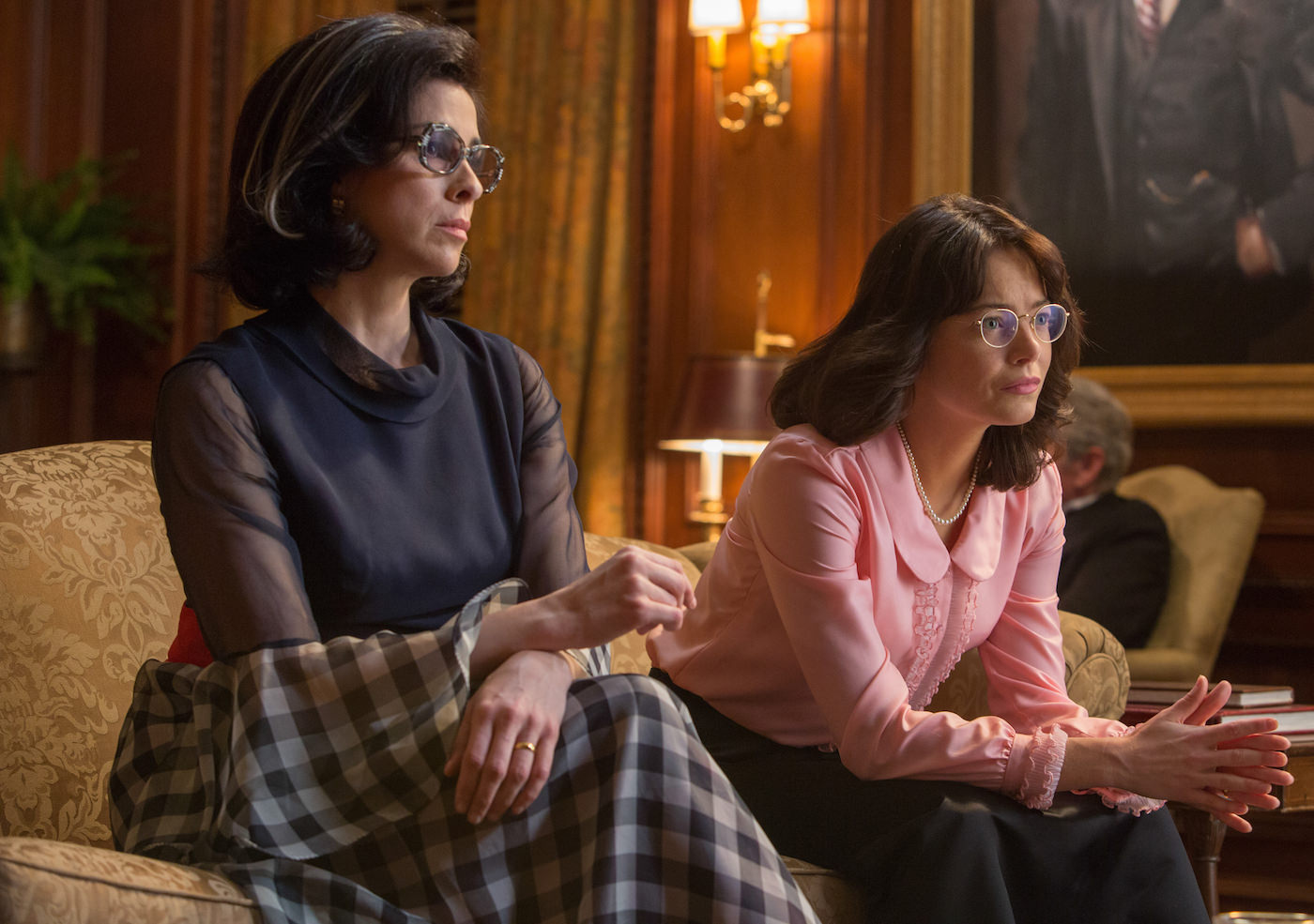 For Battle of the Sexes, Becker created a palette with directors Valerie Faris and Jonathan Dayton that included plenty of skin tones. “This is a story about Billie Jean King’s body as an athlete and also her body as someone who is discovering her sexuality,” Becker explains. “When Jon and Val talked about that, I brought in Elinor Caruccia’s book of photographs “Closer.” She’d taken all these very close-up shots of herself and her family so from that we got the idea of using different Caucasian flesh tones that would place the viewer in the world of the body and the flesh. I always like production design to operate on a subliminal level, where you’re able to say things visually without being obvious about it.”

Emma Stone and Andrea Riseborough in the film BATTLE OF THE SEXES. Photo by Melinda Sue Gordon. © 2017 Twentieth Century Fox

Beige and pink stripes decorate the hair salon where King meets her girlfriend Marilyn (Amdrea Riseborough). Meanwhile, Bobby Riggs begins his journey mired in a drab life on the east coast. “Bobby lives on Long Island and works in New York City so we put him in this masculine world with cold, hard surfaces, neutral putty tones dark marble in the men’s dressing room. We contrast that visually with the hair salon in L.A., which is much more traditionally feminine with different shades of pink, so you’ve got this hard black marble versus the pink.” 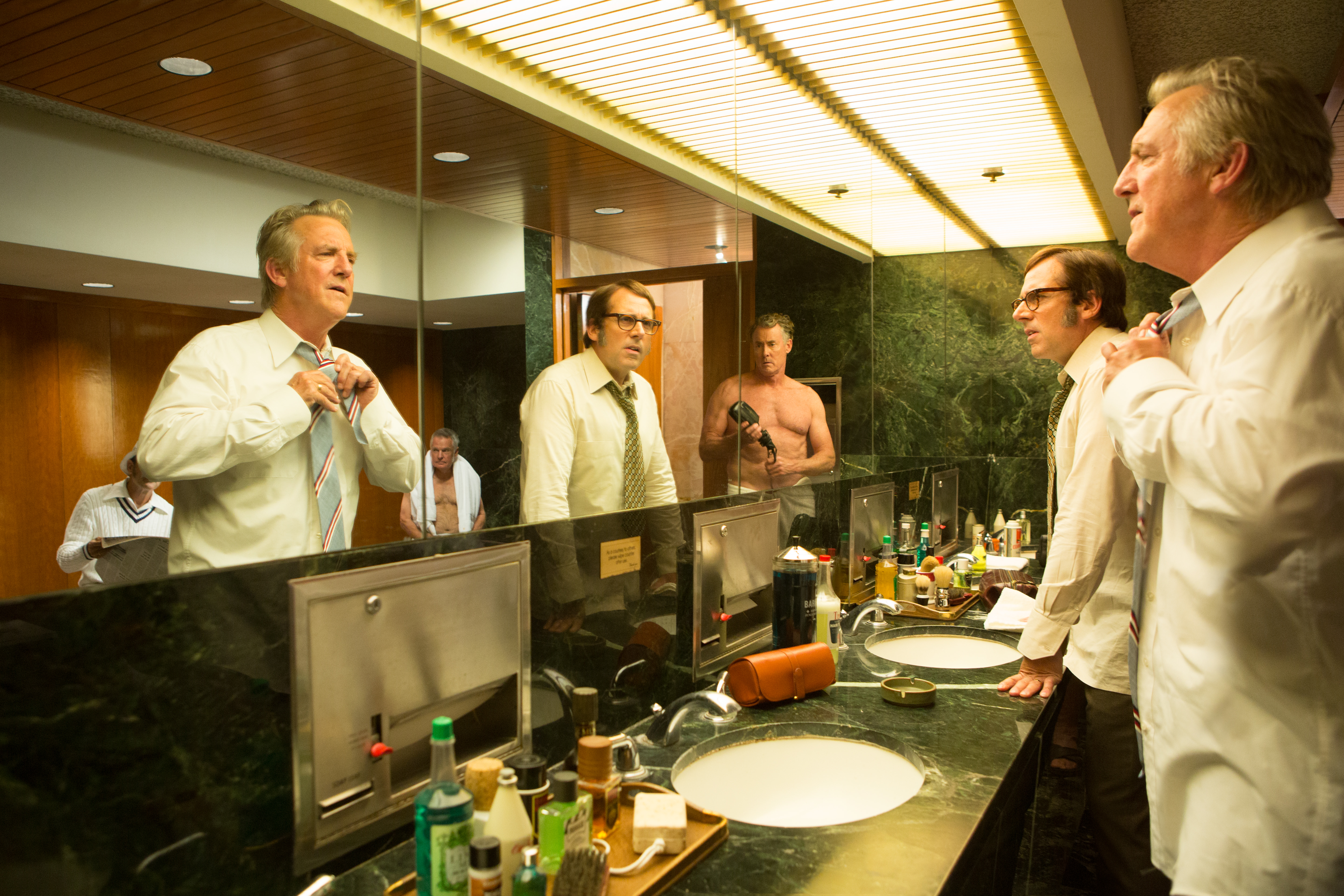 Once Riggs challenges King to a televised tennis match, he parties poolside at Betty Grable’s Hollywood mansion, doubled in the movie version by an estate once owned by ’60s TV star Connie Stevens. Meanwhile, King sharpens her game on the Virginia Slims Circuit, staying at borderline grubby motels with other women players. To research life on the road, Becker trawled Ebay and purchased vintage motel postcards as reference material. “I’ve become really good at finding things on Ebay,” says Becker, who first used the online marketplace to research locations for Brokeback Mountain. “It’s became such an important resource now I don’t know what I’d do without it. And I’ve gotten really good at changing the search terms until I track down everything I need. It’s like going on a treasure hunt.” 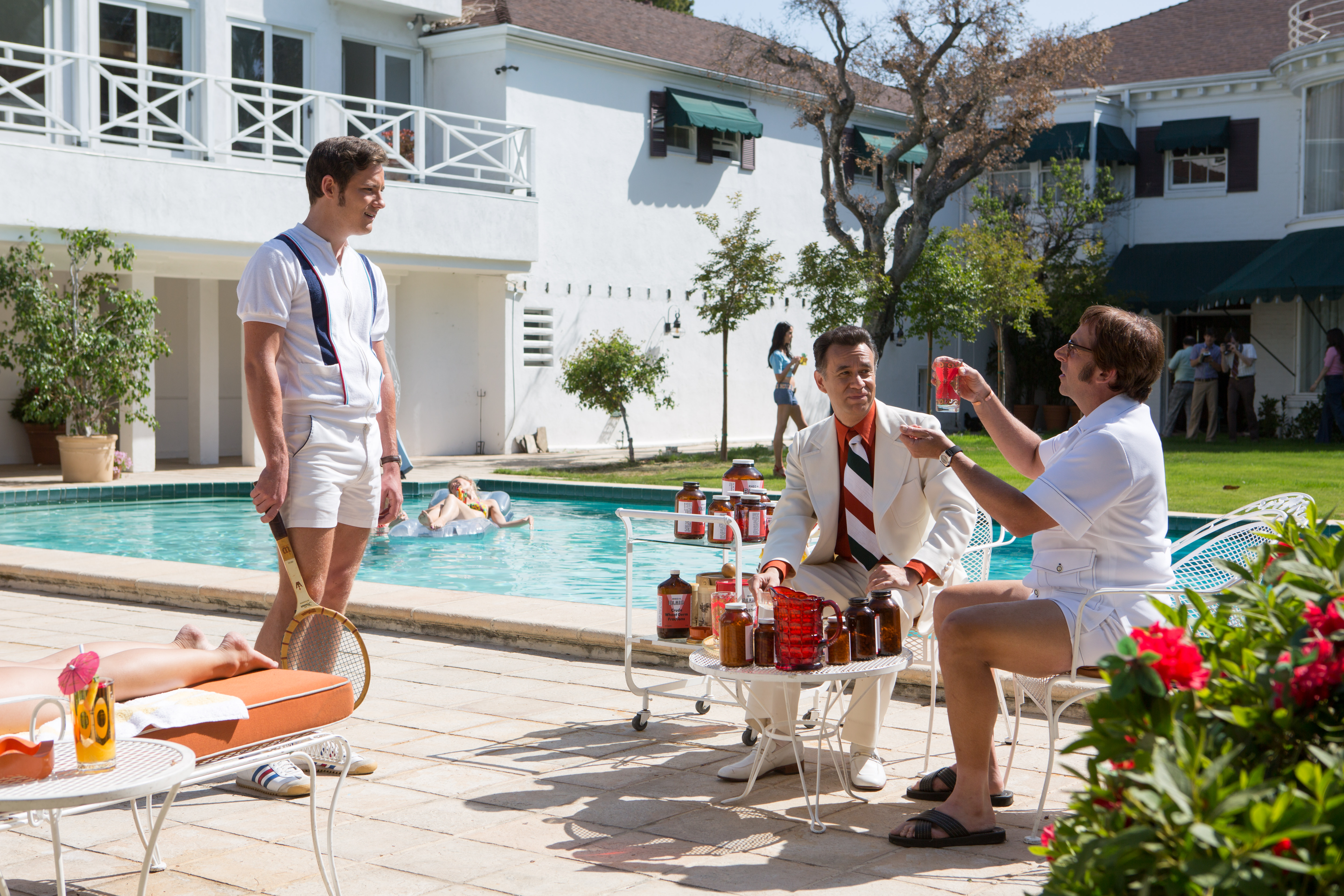 Inspired by her postcard collection, Becker scouted dozens of southern California locations but discovered that none of the period-appropriate motels had rooms large enough to accommodate camera crews. But she did manage to find a perfect-from-the-outside “Romance Motel” where Billy Jean King and Marilyn spends their first night together. “We found this great place called the Court Marina in Long Beach, which was on the water. Billie and Marilyn walk along the balcony there and then they enter the set for a room that I built on the Fox lot. We did a lot of cherry picking like that, and when I saw the movie, I couldn’t even tell they were cheats.”

Battle of the Sexes culminates in a circus-like showdown staged in real life at Houston’s Astrodome. Hurricane Katrina had damaged the Astrodome so Becker reconfigured Los Angeles Memorial Sports Arena as a replacement venue. Demolished shortly after filming took place, the stadium served as the perfect shell within which Becker did her handiwork. She says, “The Astrodome event was very well documented so we were able to replicate the entire look of the match, right down to the fact that six inches of basketball court are peeking out from under the tennis court.”

The makeover included a surprise discovery when a carpenter laying down the tennis court foundation hammered into a gusher of coolant. “The arena used to serve as a hockey rink, so he hit this valve connected to a tank holding liquid coolant which squirted out of the floor like a fountain. It was like we’d discovered oil,” she laughs. 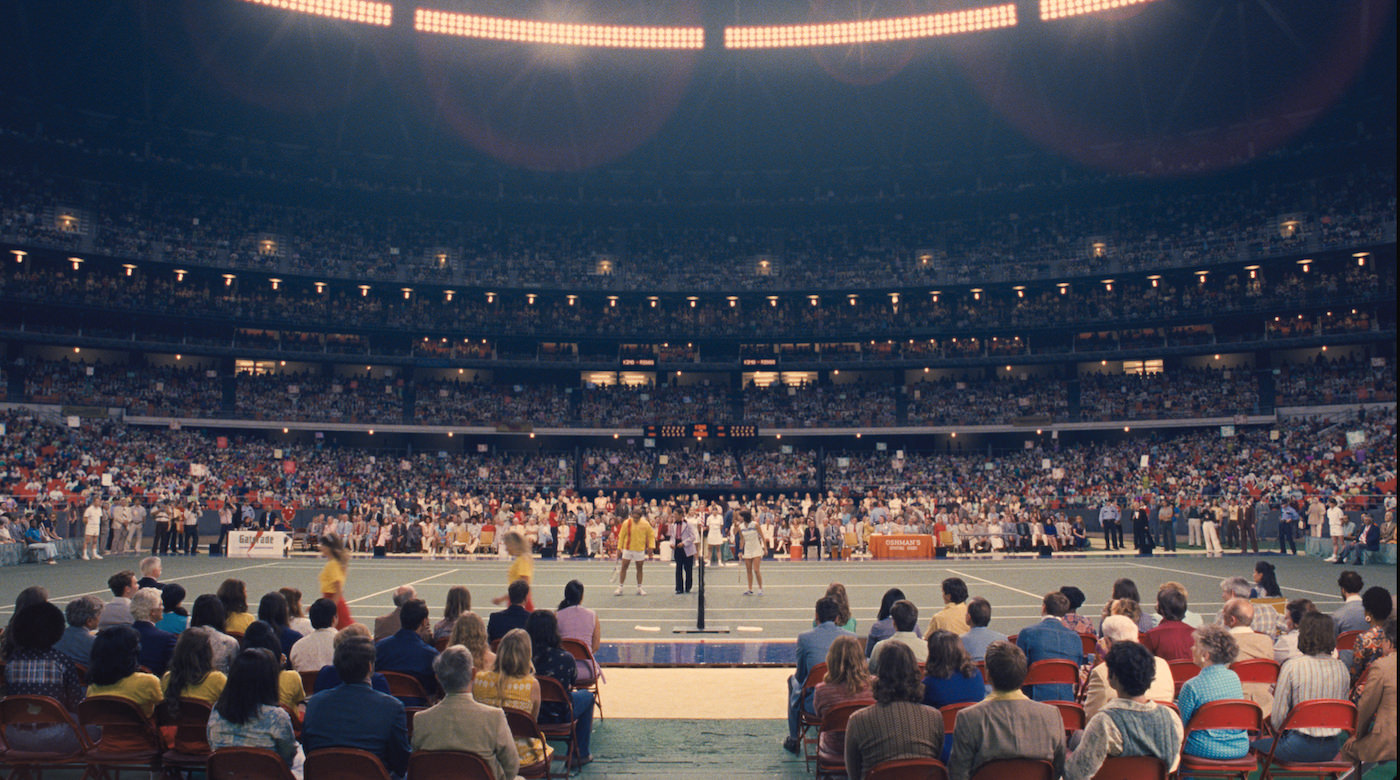 Boasting a number of female crew members, including sound designers, costume designer and editor, The Battle of the Sexes production itself embodies a continuation of Billie Jean King’s feminist ethos, Becker says. “The line I like most in the film, which I’ve used a few times about myself, is when Billie Jean King says something like ‘I’m a tennis player who happens to be a woman.’ Well, I think of myself as a production designer who happens to be a woman. I respect that approach.”