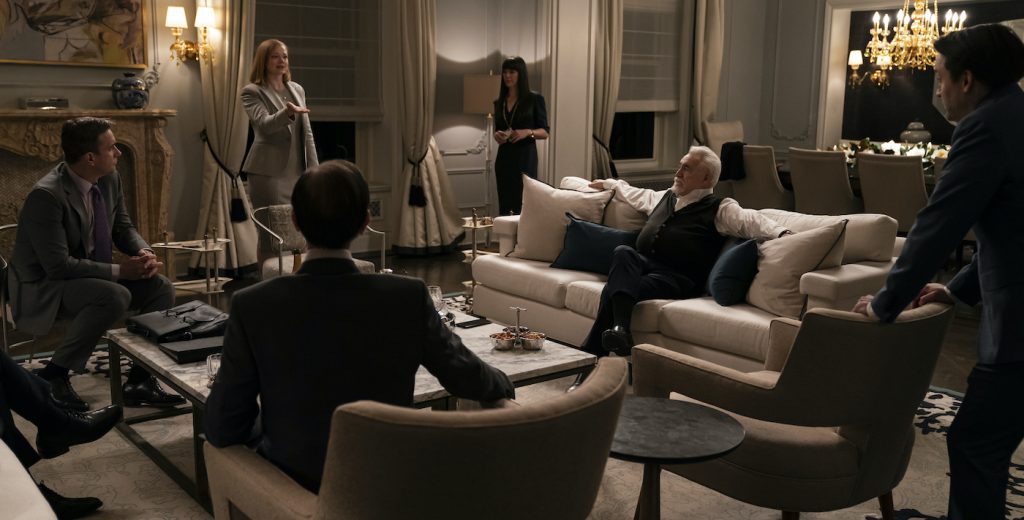 Succession director Mark Mylod knows his way around family drama. Mylod’s been with the series since the first season, directing the second episode (the pilot was helmed by co-creator Adam McKay), and is now the most tenured Succession director of them all, with 12 episodes to his credit. He’s also something of an expert when it comes to palace intrigue, considering he’s a Game of Thrones alum, yet he admits that Succession‘s highly-anticipated and ultimately critically acclaimed third season presented some unique challenges.

One of those challenges was that season three would payoff the long-simmering internecine battle between the scheming Roy family that’s been boiling since the pilot. In the season two finale, the oft hapless Kendall Roy (Jeremy Strong) announced to the entire world at a press conference that his father, the fearsome if wounded Logan (Brian Cox) wasn’t just an inept leader of Waystar Royco, he was a criminal. Thus, two seasons and 20 episodes worth of moves and counter-moves, backstabbing and sniping had now officially given away to a father-versus-son blood feud, and Mylod was responsible for four episodes in the third season, including the crucial premiere set mere minutes after season two’s finale.

We spoke to Mylod about the challenges, and joys, of helming creator Jesse Armstrong’s brilliantly baroque family drama, how he approaches working with an ensemble cast, and why authenticity is the key to Succession‘s success.

How did you approach directing the first episode for season 3, which picks up right after season 2’s explosive finale?

The thought process was somewhat driven by fear of failure on my part. We’d made a choice that it was going to pick up ten or fifteen minutes after the end of season two’s storyline, and that really dictated the approach. Because it was apparent to me the challenge was to match the intensity and kick straight away into high gear. The beginning of season two was much less intense, it picked up with more of a slow burn. In season three, we wanted to parachute the audience right back into the level of intensity with the press conference of season two.

At long last, the Roys were finally at war with each other, with family members being forced to choose a side, Logan or Kendall. What were some of the challenges of filming this battle we’ve been waiting for?

My part, in particular, while also trying to shoot in the middle of the pandemic, was to match that intensity. In the writer’s room, we decided the season really was going to be about civil war, and we wanted to ramp this up. This had been the undertone in the first two seasons and now it was outright conflict. So it was a ramping up of scale, which in production terms was tricky to achieve. We were very limited in terms of the number of people we could have on set at that time. As the season progressed, we structured it so that we could scale up in the hope that Covid would drop to the point where we could get more people in the shots. The last two episodes were set in Italy, but we weren’t remotely sure we would be able to shoot in there, so we were running two models, one with production in Italy, and another with production in North America.

How were you going to play those Italy scenes in North America?

It was quite sad because we couldn’t decide where that would be. Maybe up in Maine, then we thought about going to Rhode Island, but Gilded Age was cranking into production for HBO and we felt we’d be stealing their locations, so we went away from that. We thought about going to Martha’s Vineyard, and then south to Florida, but it all felt like such a stretch for where their mother would get married. Everything kept pushing back to Chianti, Italy.

You’re working with such a talented ensemble cast that we could really just go through the list one by one, but I’d like to start with what it’s like to work with Brian Cox.

Brian Cox’s presence is extraordinary, and as intimidating as he is, when there’s a big scene to shoot, he’ll come to set as nervous as a kitten because he’s so keyed up and wants to get it right.

One of the show’s strengths is the way these actors all seem to thrive as warring siblings, spouses, or in-laws. How do you harness their varied styles and skills?

With this ensemble, a huge part of my job is to facilitate each of those actors who have their own ways of working, and a lot of our scenes are big ensemble scenes. That’s what I get paid for, to set up an atmosphere where they can all thrive and work. It can be tricky, as they do have disparate ways of working. Whatever allowances we make for each other, hopefully, the results speak for themselves. Whatever comes out, the truth is when we’re on set we’re all working towards the same goal.

You really got to lean into your ensemble chops with the final two episodes of the season, where we’re charging towards the endgame with either Logan or Kendall coming out on top.

Because season three was about that war, the great dramatic opportunity in episodes eight and nine was to bring them all together, force them into the same space, and let sparks fly. As soon as we got that setup, Jesse [Armstrong] wrote two brilliant episodes, so by that point, we know where the whole season is heading. So through the final two episodes, eight and nine, we’re calibrating the ride of those actors. We tried to play it throughout the season that there was a sense of Kendall being on the rise, particularly at the beginning of the season, then hitting those challenges as the Teflon-coated Logan refuses to be knocked down. Whether it’s Logan wielding his power with the DOJ or something else, he always finds a way to win. As Tom says to Kendall, “I’ve never seen Logan get f*cked.” By the time we get to episode eight, Kendall’s just had this terrible dawning truth that he can never win, he can never beat his father, that’s his fate, he can never escape that gilded cage or his place in the hierarchy. So the tragedy for Kendall is that terrible realization that he will never win.

There was a sense in the beginning that Logan could actually lose, as he began the season looking more than a little vulnerable, too.

Logan’s arc through the season was that we start him at his lowest point in episodes one and two when he’s forced to head off to Sarajevo, then he gradually uses all the grit and experience and power he has to come out as the winner. There’s a Shakespearean inevitability about that, even with the ups and downs, that eventually, Logan will find a way to be the last person standing.

What kind of conversations do you have with Jesse Armstrong about stuff like that, the Shakespearean elements to the series, the patriarchial battles, the specter of aging and losing your power, the toying with your children about who will inherit the throne…

We rarely talk in terms of attempting to compare Succession with Shakespeare because that would be sad [laughs], but, what we do talk about is the dynamics of power, the dynamics of family, and the authenticity of what we’re doing. We’re one step removed from reality because we’re not writing about Rupert Murdock or Summer Redstone, but we’re drawing from that type. So every choice, performance, and location is a reflection of the reality of dynamics of power in modern America and modern capitalistic society.

Much has been made about how Jesse’s British, and that remove has given him more clarity on the subject of America’s capitalistic cruelties than an American might be able to bring to bear. Do you agree with that?

I don’t think it’s the case that we see this clearly because we’re British. The old Churchill thing about how we’re two countries separated by a common language, but in fact, America and England are so similar, and Jesse has a lifelong passionate interest in American culture and politics, he’s incredibly well informed. It’s more a question of his passion for the subject matter. We’re very aware of our limitations as foreigners—I’ve lived in New York for 12-years, but I don’t know the heartbeat of the city as a proper New Yorker, so we put in a lot of work into research, we talk to consultants, we go over every word that an English person would use but not an American, what someone wears, and we speak to the right people and put the work into the end game, which is authenticity. So ultimately I don’t agree that our being British gave us special clarity. Perhaps Ang Lee was perfect for Sense and Sensibility because he was looking at the culture from the outside in, but for us, it’s just about doing the work to be as authentic as possible.

Succession was renewed for a fourth season by HBO.