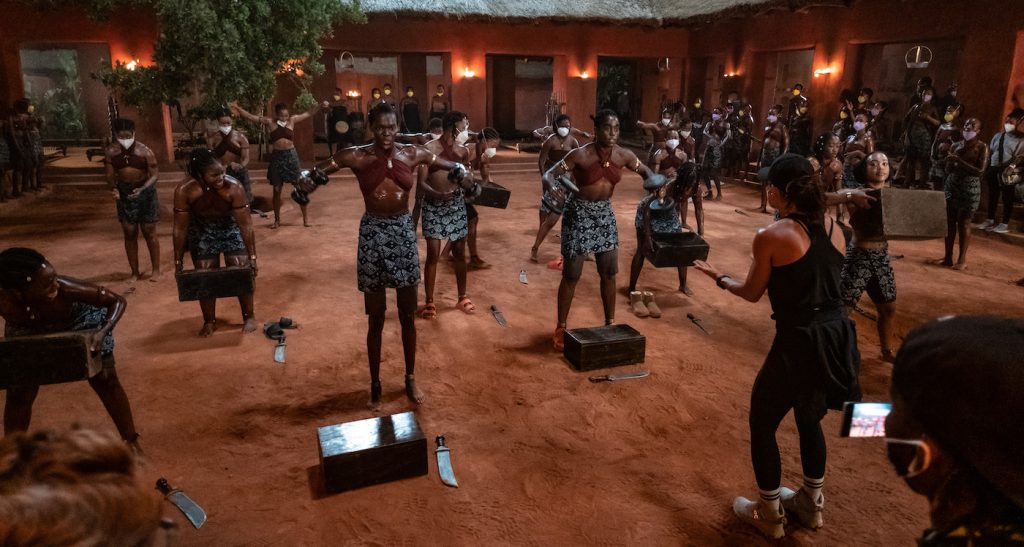 Talk about reading the room: actress-producer Maria Bello pitched The Woman King directly to Viola Davis in 2015 while standing at the podium to present her with a Women Making History Award. Davis immediately embraced the fact-based story about General Nanisca, who, in the 1820s, led an army of fierce 19th-century women warriors from the West African kingdom of Dahomey (now Benin). On September 16, The Woman King opened with Davis in the title role alongside co-stars Thuso Mbedu, Lashana Lynch, and Sheila Atim as machete-wielding “Agojie” soldiers. The movie features rip-roaring fight sequences courtesy of director Gina Prince-Bythewood (The Old Guard), stunt/fight coordinator Daniel Hernandez, and lead cast trainer/nutritionist Gabriela Mclain.

“Everything is real,” says Mclain, who started working as Davis’ personal trainer about four years ago and now organizes her operations through her website. “It’s not CGI. We’re not trying to trick anybody. The actors put in so much dedication and heart and soul. To me, that makes them real superheroes.”

Speaking from her studio in Los Angeles, Mclain talks about DNA testing, on-set “pump-up” sessions, and the five-meal-a-day regimen that got The Woman King cast into fighting shape.

It’s startling to see Viola Davis in The Woman King as this muscular action hero not long after she portrayed blues singer Ma Rainey in a 300-pound fat suit. Now here she is swinging machetes in the jungles of West Africa. First of all, how did you help Viola with Ma Rainey, and secondly, how did you prepare her for The Woman King?

Well, I didn’t have to help Viola with Ma Rainey. It was just telling her to eat eat eat, let’s not work out too hard, let’s not burn too many calories. But after Ma Rainey, we wanted to get her body back to shape and lose that weight because she was about 40 pounds over.

How did you do that?

Six days a week, it was morning sprints for an hour and a half. Then she’d go to martial arts with Danny Hernandez, who created the choreography. Then she’d come back to me for two hours of strength training with heavy weights.

You’re a nutritionist as well as a trainer. What kind of diet did you create for Viola?

I designed a plan, five meals a day. For breakfast, an egg, maybe sausage. Then she’d have a snack: vegetables or little chicken strips. Then lunch: quinoa and salmon. Then another snack like the previous one, or a protein shake to protect her muscles. And then dinner was similar to lunch. Also, Viola was forced to drink one gallon of water a day.

[Laughing]. She was forced. I’d go, “Viola, did you drink your water?” [impersonating weary-voiced Davis]: “Yes Gabi, I did.” You have to flush the body and keep it balanced! I also did DNA testing with Viola to get the blueprint of her body. I found out she has more fat-rich muscles, meaning doing cardio would be a waste of time, and I learned how long it takes for her to process carbs and fats.

Back up a minute: you say you got Viola Davis’ DNA profile?

Yes, I got her DNA test, which lets you find out how to get the best out of an athlete. I’m a big fan of DNA [profiles] because we’re all unique. Each body functions differently, so you want to know: what are the triggers, like, for bloating out? DNA helps you figure out those triggers.

You initially worked just with Viola Davis, but then the filmmakers expanded your responsibilities?

Yes, I signed up only to take care of Viola. A week later, they asked me to take Thuso, and then I got assigned Lashana Lynch, Sheila Atim, and Adrienne Warren as well. When Viola first talked to me about The Woman King four years ago, it was so close to my heart and something I needed to be part of. Little did I know I’d be training the whole cast!

Like Viola, Thuso Mbedu made a dramatic transformation. Coming from The Underground Railroad, she did a great job playing a runaway slave but didn’t get to do much fighting.

Thuso could barely pick up two and a half pounds, and she didn’t like to work out. We had to turn that mindset.

There’s a real contrast in body types when you see Thuso and Viola in scenes together.

Well, that was the goal, to make each character different. Viola’s actually small, but since she’s the Woman King, I tried to make her look mighty. Thuso’s tiny, and because her character Nawi has just joined the army, she can’t be in super-awesome shape at the beginning. Sheila’s long and skinny, so she has a different body structure from Lashana, who’s this powerhouse. I did DNA tests for all the actors assigned to me as well as Gina, the director. I told her, “You need to hold it together because you’re the pillar.”

You traveled to South Africa with the entire cast to film The Woman King. Was that always part of the plan?

Originally I wasn’t supposed to go to Africa, but once I got the actors into shape, then it was “Who’s going to keep them in shape?”

You supervised the meals on set. How did that go?

The meal structure was pretty much the same as before, five meals a day. The actors ate every three hours, even if they didn’t want to. You can’t power through the movie twelve hours a day doing fight scenes on just 1300 calories. You’d collapse or have a tantrum. We needed to keep the calorie intake high to keep their energy up.

How did you sustain the training once shooting began?

We called it “The pump-up.” Before every take, I’d show up with light weights on my shoulders, and we’d say, “It’s pump-up time!” We’d do these pump-ups to bring the blood to the actor’s body for two reasons. You can see it when the veins pop up in the body, and also, you feel it. The energy changes. It’s like if you do ten pushups, you’re going to carry yourself differently. We wanted to bring the blood up and change the actor’s mindset: “You are a badass, and you’re going to kill it.”

Before working on The Woman King,  you went through quite a journey yourself: Sports school in The Czech Republic, dancing, moving to L.A. at age 22, starting your career as a personal trainer…but then you hit a hurdle?

I found out I had an auto-immune problem. For a year after my daughter was born, I could barely get off the couch. It was frustrating when you feel so tired you can barely hold your child or walk from the kitchen to the living room. But I saw this rheumatologist, and he said, “Drink water, don’t eat anything with more than three ingredients, meditate, and try to be happy.” I’m able to keep it at bay now. And having gone through this struggle, the auto-immune issue has helped make me the trainer I am.

You trained The Woman King stars for three months in L.A. and another month during pre-production in South Africa. How did it feel to finally see all that preparation pay off?

We all got teary-eyed. We’ve been talking about this story for so long, and at this point, Viola Davis is like a big sister to me. When I saw her in action, knowing what she went through and all the pain and hard work, it was extremely emotional. I’m proud of all the actors who worked so hard to push this forward. To me, The Woman King is not just a movie; I think it’s a movement. It’s going to shift things. I have a daughter. She’s bi-racial. It means a lot to see these heroes, these women of color, doing all this without men having to be their saviors. It’s very empowering. In fact, I have a new program on my website called “How to Train Like a Woman King.”