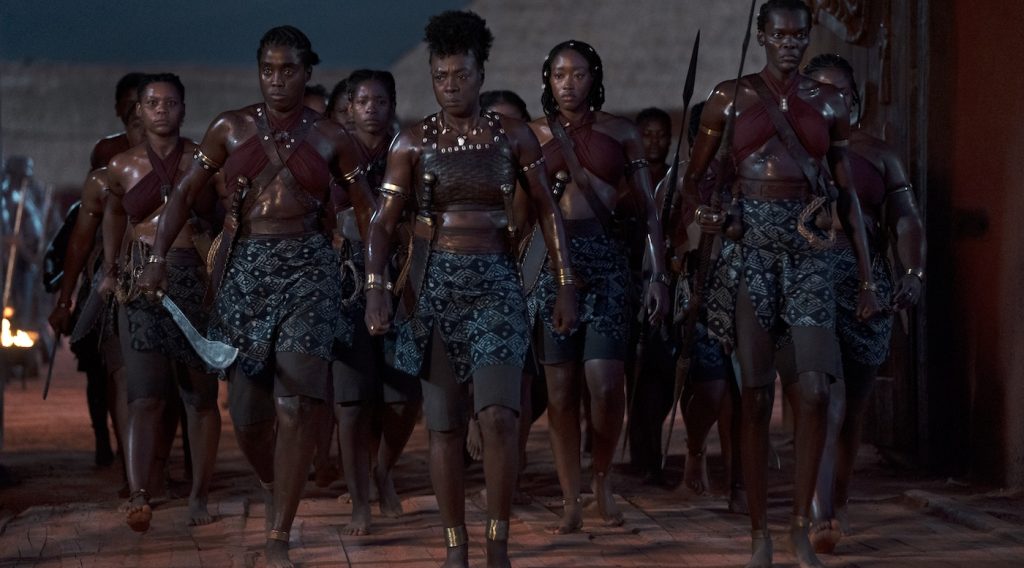 Intensity and discipline were trademarks of the Agojie warriors who defended the African Kingdom of Dahomey in the 19th century. Their caliber of combat was so unmatched that one of their most unexpected traits often went undetected by their enemies.

“They fought with male warriors, so they would disguise themselves and look like men,” costume designer Gersha Phillips shared from her research. “There are several accounts of people who said when they came through their camp, they couldn’t tell that they were fighting a woman until they captured the person.”

The all-female Agojie army was highly skilled and fought to defend their homeland from invading colonizers. That conflict was a defining moment in their storied history and is memorialized in director Gina Prince-Bythewood‘s astonishing The Woman King.

Phillips implemented a blend of authentic and practical techniques to bring these incredible women to the screen. To achieve that androgynous aesthetic, she relied on binding style tops and a clever interpretation of original Agojie uniforms.

“They would just go topless, but what they would do is put these cross straps on to carry their weapons,” Phillips explained. “That’s when both [director] Gina [Prince-Bythewood] and I were like, well that could be a halter top. We could say it’s a close enough resemblance to something that they actually did. So, the two tops that we did was the binding and then the halter.”

Finding reference material proved to be an incredible challenge. Phillips’ discovered that her first impression of the Agojie uniforms was a false one. Accurate accounts proved to be scarce.

“When you look up Agojie or Dahomey or any of those types of words, you get some very specific pictures. They are pictures that we realized, later on, are from the World’s Fair,” Phillips realized. “They actually put the Agojie on display as exhibits. So this whole idea of the plumes and the cowrie breastplate – all of that stuff was actually something that was a Europeanized version of the Agojie that was used as an attraction and exhibit at the World’s Fair.”

A historian with familial ties to the Agojie eventually came on board and helped delineate truth from fiction. Phillips’ research immersed her in the fascinating culture where each consultant to the reigning monarch, King Ghezo (John Boyega), had both a male and a female counterpart – the Migan and Miganon. Viola Davis leads the warriors as General Nanisca, the Miganon. Her status called for Phillips to design a standout style that denoted her position of power.

“The reason we went with the breastplate for Viola, we just wanted something that elevated her costume and gave her that general rank,” Phillips said. “I knew that the breastplate existed already, I figured that there must have been some version of it that existed. We actually put one on Viola, and then we put one on the Migan, on Siv [Ngesi]. They’re both the Generals of their leagues of their armies.”

Like most combat units, there’s an imposing consistency in the Agojie’s uniforms that emphasizes their strength and unity. Yet, Phillips gifted each soldier with individuality that reflected their accomplishments in battle. The cast was directly involved with shaping their character’s style and the meanings that each embellishment signified.

“We made these two really cool tablets and put all the different symbols on them with meanings for each thing. Then each actress, when they came in, they were allowed to pick symbols for their belt and their different things,” Phillips recalled. “It was a really cool thing. It was interesting to watch what everybody picked. Also, for their necklaces, we put little charms on their necklaces. We just did different ways of trying to give everybody a little individual feel and also to create those ranks. Obviously, Nanisca has the highest rank, and then Izogie (Lashana Lynch) was second.”

By the 19th century, the western world was flush with firearms in warfare, but the Agojie were still dominating battles in hand-to-hand combat. All of the actors were subjected to rigorous diets and training to prepare for the extremely physical roles and strikingly exposed costumes. The fighters were not inhibited by layers of armor, but that also meant that there was very little material for Phillips’ designs to hide behind. The outfits she created were required to endure extreme stunts.

“Right away, we would get them to do those in the fitting so that we would have an idea of what their movements would be like when they were in the costumes. One of the things we ended up doing was we made the top of the shorts into a spandex brief so they could fight. That would give them much more movement. That really helped a lot. I hope there’s nowhere on camera that we actually see those,” Phillips laughed. “That was our little trick.”

To create thousands of costumes, Phillips’ team obviously couldn’t dedicate time to handmade techniques for construction, but they did source and produce their fabrics with traditional methods as often as possible. The beautiful prints on many of the vibrant cloths were the result of employing customary African techniques.

“In the uniforms, we dyed all the tops. That burgundy was something we created. The blues for the men’s wraps that they wore in battle – we had that fabric woven,” Phillips revealed. “It’s called strip weave, so it was woven in a ten-centimeter-wide strip, and then you layer all the fabrics together to create the dress or the tunics. We had the men’s ones done in South Africa. Then we had the women’s ones done in northern Ghana. So that was another little crazy journey.

“Our skirt fabric was also authentic. It’s called a ‘drum print.’ That was made by a gentleman in Gambia who printed that. Even though we may not have used authentic fabric, per se, we used authentic methods as much as we could. So, we did a lot of that indigo wax method of printing and things like that as well.”

Despite advancements in technology since the Agojie were in their fighting prime, Phillips worked to ensure that the designs reflected the era. She creatively assessed what would have been feasible and accessible methods for assembling their clothing.

“We do try to make it look as hand and hide our stitching as much as possible,” Phillips noted. “When we did the shorts, we had to do blind hemming and things like that because they probably would have even been raw. Because their fabric was so much narrower, you probably would have ended up with a raw edge that you wouldn’t have to worry about. That’s probably the reality of their fabric.”

Phillips’ experience as a costume designer for the futuristic Star Trek: Discovery may seem far removed from The Woman King, but the two projects actually have a common creative element. None of the characters would have utilized a sewing machine. For the space saga, Phillips imagined where technology would take us beyond seams and zippers.

“It’s kind of the reverse of Star Trek, because with Star Trek, you’re also trying to hide all your techniques and your sewing construction because the idea is that things would be printed,” Phillips explained. “I don’t really know what printed clothing would look like. I’ve seen some things, especially Iris van Herpen’s pieces. You know, trying to envision that was something I was doing on Star Trek, and now I was doing a different version of it. Similar but different because you’re trying to make it look unconstructed and as simple as possible.”

Phillips credits an “army” of her own in the costume department who worked tirelessly across a holiday season to fill the massive demands of The Woman King.

“I was just very honored and humbled. As a Black woman especially, getting an opportunity to tell this story about female warriors in pre-colonial Africa. There’s just so many amazing parts of that story to tell that I was just really, really overwhelmed and excited.”