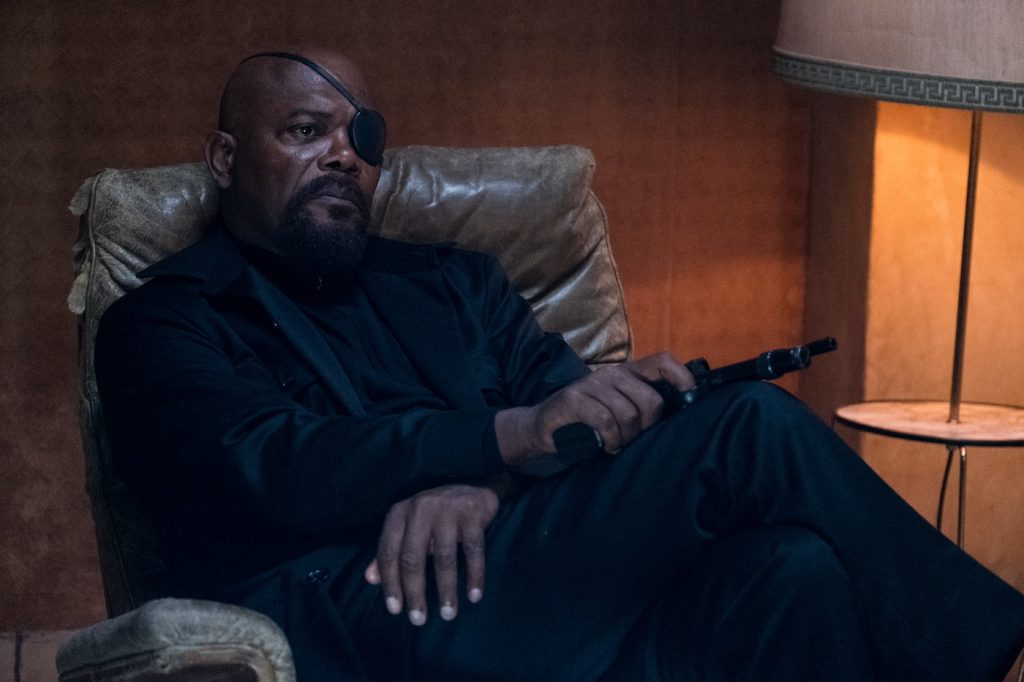 Marvel Studios has revealed, at long last, our first look at their upcoming Disney+ series Secret Invasion, starring Samuel L. Jackson as a weathered, wearied Nick Fury. The official trailer was revealed during Disney’s D3 this weekend and opens with the arrival of a spaceship and a strange alien figure emerging from its glowing interior. That figure turns out to be Nick Fury, fresh off a years-long adventure off-planet. Fury arrived to meet with his former #2, the perpetually on-point Maria Hill (Cobie Smulders). Maria wants to know why he’s been avoiding her calls for the past couple of years. He’s back on Earth on a mission, and he’s worried that both Maria and James Rhodes’s (Don Cheadle)’s security details have been compromised. Oh, and Fury isn’t alone; he’s brought a friend—Talos (Ben Mendelsohn)—his shapeshifting alien buddy he met during the adventures of Captain Marvel, back when Fury thought Talos was his enemy. Fury and Talos are back on Earth to stop the alien Skrulls (the bad ones, not the good ones aligned with Talso), who, they believe, have infiltrated the halls of power and have a secret agenda that won’t be good for the people of our humble blue planet.

Jackson and Mendelsohn made a terrific pairing in Captain Marvel, and part of Secret Invasion‘s excitement is around seeing the two of them get hours of screen time together to sort out this new, pesky problem. The cast that surrounds them is also fantastic. Having Cobie Smulders, Martin Freeman’s Evertt Ross, and Don Cheadle on board, three MCU staples, is always a boon. So, too, are the new faces, which include A-list talents like Olivia Colman, Emilia Clarke, Kingsley Ben-Adir, and Carmen Ejogo. It’s arguably the most impressive cast yet in a Marvel Studios series on Disney+, and that’s saying something considering the talent they consistently have on hand.

Secret Invasion is sourced from a very sprawling storyline from the comics and has the potential to mark some major changes in the larger MCU through Phases 5 and 6. The series comes from creator Kyle Bradstreet (Mr. Robot) and is slated to hit Disney+ in 2023.

Check out the official trailer below: