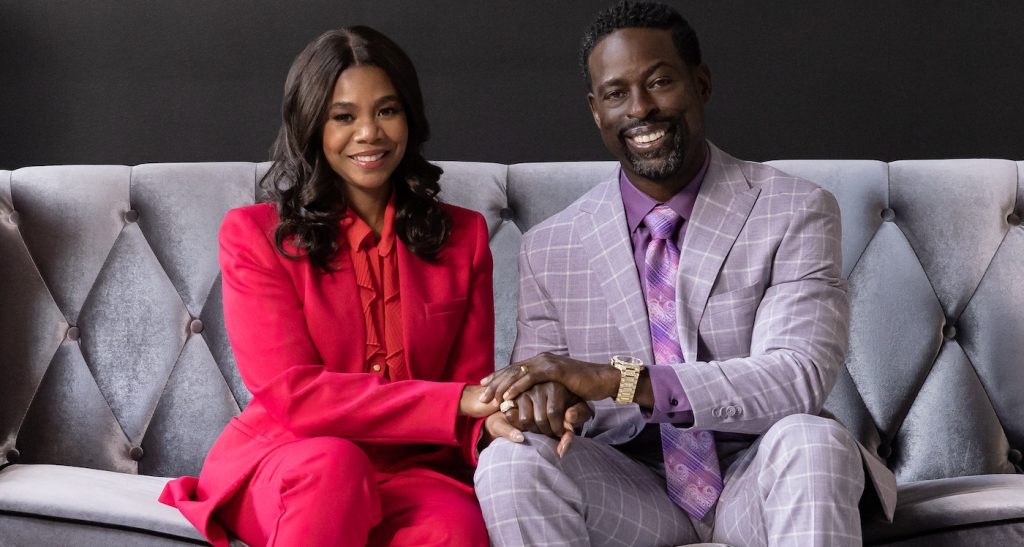 Honk For Jesus. Save Your Soul. came seemingly out of nowhere in January to become a breakout hit at the 2022 Sundance Film Festival, where Jordan Peele‘s Monkeypaw production company, Focus Features, and Peacock picked up the dark comedy. But in fact, the movie was a long time coming. Writer/director Adamma Ebo and her twin sister, producer Adanne, spent six years developing their 2015 short film of the same name. Exposure to Issa Rae’s “Short Film Sundays” YouTube series led to the Sundance Screenwriters Intensive Program along with backing from producers, including actor Daniel Kaluuya.

And no wonder. The mockumentary (in theaters and now streaming on Peacock) features bravura performances from three-time Emmy winner Sterling K. Brown (This Is Us) as the disgraced pastor of a Southern Baptist megachurch, with Oscar co-host Regina Hall (Girls Trip) playing his stressed-out wife. Together, they try to stage a comeback in the wake of a congregation-rocking sex scandal.

Sitting in near-identical poses—Adanne’s hair tilts to the right, Adamma’s to the left—the Ebo Sisters spoke from Los Angeles about how casting, clothing, and the specific details of Black church culture informed their mostly funny, sometimes sad Honk for Jesus. saga.

Honk for Jesus includes all kinds of fascinating details that might be surprising for people who didn’t grow up in the Black church, starting with. . .mime! Is that really a thing?

The sequence where we see Regina Hall in her mime makeup performing on the side of the road feels surreal, funny, and tragic all at once. When did you become aware of this mime praise phenomenon?

Adamma: Growing up in the Black church, we’ve been aware of it for a long time. A lot of people like it, but for me, mime praise always tilted over into the uncanny valley. At some point in the film, I wanted a mime scene that would feel otherworldly. And as we became aware that a lot of people didn’t know what praise miming is, I knew it would be shocking to see Regina out on the side of the road doing this.

How did you direct that sequence?

Adanne: “Never Would Have Made It” by Marvin Sapp. It’s definitely a crowd pleaser. At our premiere last night, people were singing along.

Adamma: It’s not only one of our favorite songs, but it also pairs perfectly with the fact that Regina’s character is starting to crack.

Everybody addresses Regina’s character Trinitie as “First Lady.” Is that a common title in the Black church?

Adamma: Yes. I thought all pastors’ wives were called First Lady, so it was a culture shock to realize: “This is not common knowledge.”

Adamma: Yeah. A lot of Black churches have these ornate throne-like chairs on stage.

Adanne: Anything to do with the culture of the Black church and Christianity, we weren’t making anything up.

That includes the Honk for Jesus scandal itself, right? I read somewhere that in Atlanta, where you grew up, something similar happened at one of the megachurches there?

Adanne: It was everywhere, to be honest. There’s a multitude of megachurches in Georgia, Texas, Tennessee, Alabama, and throughout the south in general. The communities were very insular, so we’d hear about everything, like at our cousin’s church in Texas.

Adamma: In high school, I became dismayed with people’s responses to these occurrences, where they’d want to protect the person at fault. That’s when I was like: Okay, we have to take a look at what’s going on here because it’s like we don’t care about [victimized] people in the church where you’re supposed to love thy neighbor.

Adanne: There’s also this culture of “family business” in the Black community, where we resolve issues like this internally. Black people believe in presenting ourselves to society at large in a particular way.

Adamma: So much of that is because we’re usually not in control of the narrative created around us, so that when we do have control, we don’t want to put out anything bad. But there’s inherent harm in situating things that way. If we sweep it under the rug, if we don’t talk about things, then nothing gets resolved in a healthy manner.

Adamma, when did you translate your feelings about this kind of wrongdoing into script form?

Honk for Jesus. could have been treated as a straight-up drama. Why did you take the comedic route?

Adamma: A lot of the story is nothing new, so we wanted the approach to be fresh. People are getting mostly comedy in the first act, and then you slowly roll in these [darker] aspects as a way to Trojan Horse in the [serious] points we wanted to make. The comedy helps the medicine go down.

Adanne: We love dark comedies, we love satire, and I also think it’s just inherent to our sensibilities. Black folks handle the tough stuff through humor.

A casting question: Regina Hall’s well known for her comedic talent, but Sterling K. Brown appeared in Black Panther, earned an Emmy nomination for portraying Christopher Darden in The People v. O.J. Simpson: American Crime Story, and won an Emmy for the very serious TV drama This Is Us. He’s not usually associated with comedy, so what made you think of him for this role?

Adamma: We did not think of him at first, until one of our producing partners suggested him. Our first question was, Wait, is Sterling funny? But we dived into his credits and saw…

Adanne: He was nominated for a Best Guest Star in the half-hour comedy Brooklyn Nine-Nine where he plays a murderous dentist. Very deadpan…

Adanne: So we’re like, oh, he is funny. Seeing that he could do deadpan, the hardest kind of comedy to pull off, we felt he could definitely do the broad stuff and the dramatic thing and everything in between.

Adamma: People are used to Regina being funny, but they’re certainly not used to Sterling being funny. They both get to be deeply dramatic and deeply funny, oftentimes in the same scene.

You two obviously work well together, but it’s rare to see filmmaking sisters in an industry that welcomes teams like the Coen Brothers and the Russo Brothers. When you attended Spelman College together in Atlanta, did you hatch a master plan to join forces as filmmakers?

Adanne: Well, first of all, I just want to say there would probably be more sister filmmaking duos if people let women make more films. We’ll ultimately see more of that in the future. But as far as our journey, the plan was for both of us to go to law school. Adamma strayed from the plan and went to film school, but I did go to law school thinking, “I’ll be on the business and legal side, you’ll be on the creative side, it’ll be real cute.” But I became disillusioned with being an attorney, so when Adamma asked me to produce her second-year short film while she was at UCLA, that’s what really kicked off our creative partnership.

One more question about Honk For Jesus. The costumes are incredible. From Lee-Curtis’ purple plaid suit to Trinitie’s fancy hats, the pastor and his First Lady wear wonderfully over-the-top outfits. Do their clothes reflect Black church attire?

Adamma: It’s a frigging fashion show. I like fashion, so I don’t mind it at all, I want to see what people are wearing, I want to look good all the time. But aside from the fact that it’s true to the culture, the costumes were instrumental in showing the wealth and opulence of this couple. Lee-Curtis and Trinitie are very much about their image, and they like the finer things in life. Sterling had a good time in those suits!