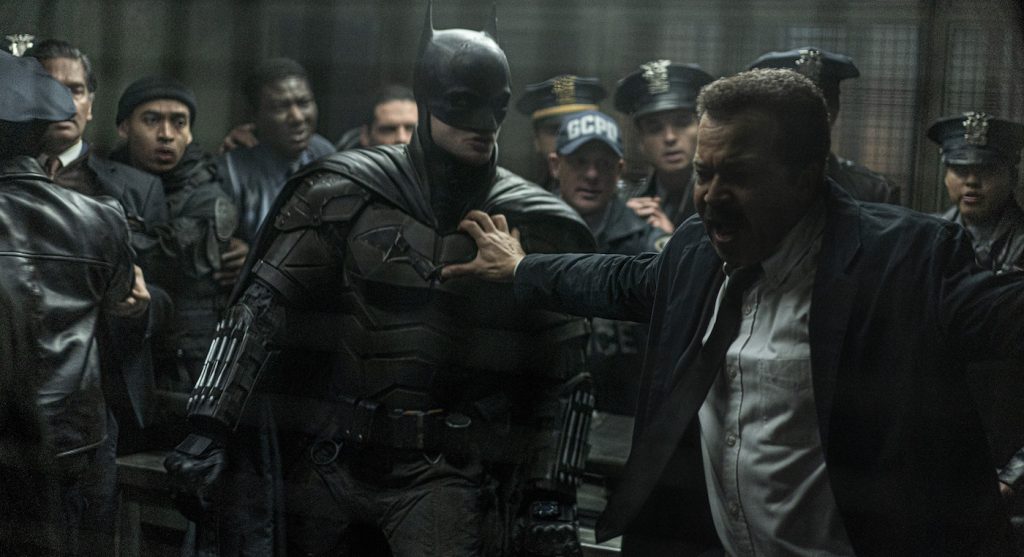 Now that Matt Reeves’s The Batman has been seen by critics and is enjoying a massive amount of critical buzz, you might notice a debate starting to lurk in the shadows of Gotham—is The Batman as good, if not better, than Christopher Nolan’s The Dark Knight?

We’re not big on ranking films or performances here at The Credits. It’s too much a matter of personal taste, it’s too reductive, and it’s simply not in our DNA. We’re first and foremost concerned with digging into the craft—how did the costume designers to the makeup effects specialists and cinematographer and editor (and everybody in between) create the thing we just saw? Yet, considering the excitement surrounding The Batman and the number of times critics are raising Nolan’s The Dark Knight, it’s worth noting why these films might feel like siblings, and why some folks are pitting them against each other.

When Nolan rebooted the Batman franchise and more or less changed superhero films forever, he did so with 2005’s Batman Begins, an origin story that gave us (yet again) the murder of Bruce Wayne’s parents and the subsequent formation of his tortured, vengeful side. While that film immediately put Nolan’s singular stamp on Gotham and Batman in particular and superhero films in general—elevating both—it wasn’t until three years later when The Dark Knight arrived did we see Nolan at his superhero best. That was because by then, Christian Bale’s Bruce Wayne was deep into vigilante work, and Nolan could therefore focus his attention on a psychotic new threat turning Gotham into a terrifying carnival. That would be Heath Ledger’s iconic performance as the Joker, of course. In the second film in his trilogy, Nolan had all the time he needed to tease out what is widely considered the greatest struggle between the two characters in a superhero film ever. The Batman v Joker dynamic in The Dark Knight was primal, brutal, and ultimately mythic.

Reeves was clearly a fan of The Dark Knight, as he decided to skip the origin story step entirely when he set about rebooting the franchise. In The Batman, we’re dropped right into the second year of Bruce Wayne (Robert Pattinson)’s work as Batman, and it’s taken for granted that we know what set Bruce on this path in the first place. This gets us right into the action and buys Reeves time (in a movie that’s one of the longest superhero films ever, no less) to delve into not only Bruce Wayne’s tortured psyche, but that of his main opponent, Paul Dano’s the Riddler. By forgoing the lengthy set-up and putting us right on the streets of Gotham with Batman, Reeves and his team gave The Batman the kind of immediate momentum, and gravitas, that Nolan enjoyed in The Dark Knight, without needing an origin film before it to set it up. Pretty nifty trick.

A Batman movie, like any superhero film, lives or dies with its titular hero. In both The Dark Knight and The Batman, Bruce Wayne is played by a performer capable of astonishing intensity in both Christian Bale and Robert Pattinson. Yet what elevates these films from merely very good superhero films to great ones is the fact that their captivating central characters are surrounded by equals. In The Dark Knight, Heath Ledger’s turn as the Joker is, without hyperbole, one of the great performances of this century. No serious discussion of what makes The Dark Knight so beloved to this day can diminish the fact that Ledger gave Bale’s Batman a foil that was his equal in every way by being just as demented as Batman was determined, just as gleefully psychotic as Batman was coldly rational, just as willing to do whatever it took to break Batman as Batman was to capture the Joker. But remember, there were a lot of great actors in The Dark Knight, and each one of them added crucial depth. Maggie Gyllenhaal’s doomed Rachel was the heart of the film, the proof that the Joker really did want to see the world burn. Gary Oldman’s Jim Gordon battled his own demons, Morgan Freeman’s Lucious Fox began to doubt Batman’s morality, Aaron Eckhart’s Harvey Dent went from Gotham’s savior to a monster—each one of these characters brought complexity and real pathos to the film.

This brings us to The Batman‘s stellar cast. Pattinson seems to have been born to give us this new, wiry, wounded version of Bruce Wayne, and he’s ably abetted by an incredible slew of performers. Zoë Kravitz’s Selina Kyle/Catwoman, Dano’s aforementioned lunatic Edward Nashton/The Ridder, Colin Farrell’s Oswald Cobblepot/The Riddler, Andy Serkis’s Alfred, Jeffrey Wright’s Jim Gordon—the film is a taut, street-level detective story that’s crawling with great performances. Reeves understood, as Nolan did before him, that a great Batman movie needs a lot more than a great Batman.

Finally, what these two films have in common, and why they pack such a punch, is that they’re ambitious in their desire to mix genres, to be more than simply a superhero film. In The Dark Knight, Nolan offered the most psychologically complex superhero movie in ages by giving Batman a foil that seemed to know exactly how to hurt him with the Joker, a psychopath who laughed and mocked Batman’s attempts at making sense of his actions. It was a brilliant move making Ledger’s the Joker such a gleeful psychopath, one who not only couldn’t be intimidated by Batman but seemed to be actively seeking Batman’s worst punishment. In The Batman, Reeves and his superb cast and crew give us a noir detective story with not one but two twisted, tortured souls at its center in Bruce Wayne and Edward Nashton. This melding of genres, a psychological thriller in The Dark Knight and a noir detective story in The Batman, give them a weight and a tension that elevates both.

You can make your own comparisons soon—The Batman his theaters on March 4.