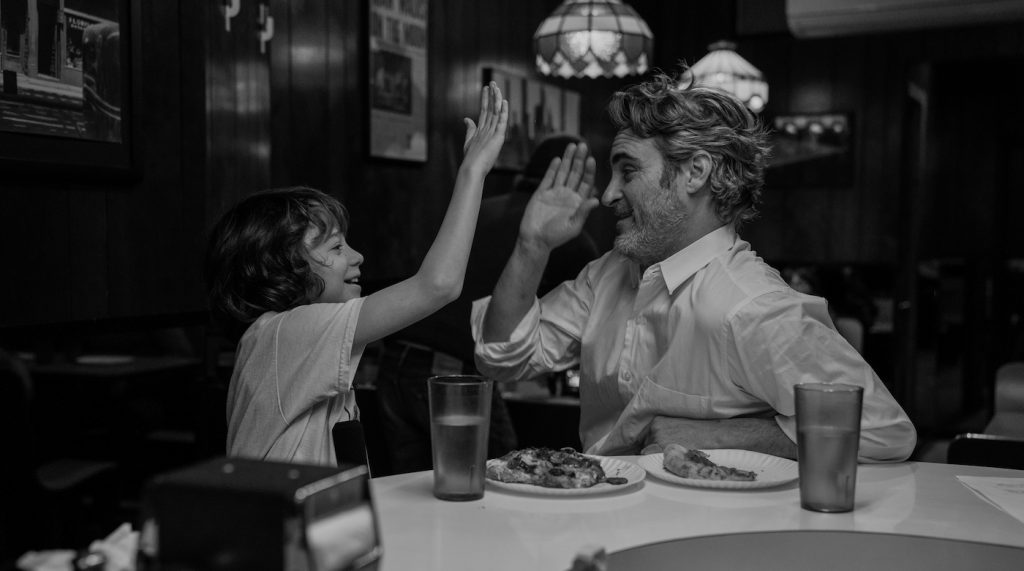 When it comes to family, we all have our own story. In C’mon C’mon, from writer/director Mike Mills, we connect with a tale not often told, one that drops us in the living room of a sister and brother who have been living their own adult lives on separate coasts and slowly drifting apart from each other. When her husband has an abrupt mental health issue, she asks her brother to step in to watch their child while she attempts to piece back their marriage.

The on-screen brother and sister are played by the ever eclectic Joaquin Phoenix (Johnny) and naturally charismatic Gaby Hoffmann (Viv) who both deliver deeply emotional performances. Over the course of several days, and in-between flying to multiple cities to continue creating a radio documentary where he interviews children, Johnny watches over Jesse (Woody Norman) and the two begin to bond in unexpected ways – one that prompts Johnny to reflect on his own life and question what family really means to him.

The Credits recently spoke with Mills, who’s also known for Thumbsucker, Beginners, and 20th Century Women, to unpack how this intimate story came into being.

The story has such an intimate feel to it. What was the inspiration behind it?

The heart of the source is me and my kid. Then there’s me and my family that I grew up with and obviously the stuff that comes from the interpersonal space of your primary relationships.

It has a lot of that energy as well as some innocence to it.

That [innocence] all came from being a dad and this beautiful/heartbreaking nature of walking a kid through the world. To me, some of the most important families in my life are alternative not exactly biological. It’s about the people who show up, and often, it’s not the people you expected.

Speaking of, Joaquin Phoenix does play this uncle who pops in and out of the life of his sister and her child. What were your initial discussions in creating the character with the Oscar-winner?

It was a really lovely, long process of getting him comfortable with the whole thing. In the beginning, he was interested but he couldn’t find a way in. So a lot of it was reading through the whole script and him being interested, not just in his character, but what’s going on the other issues it brings up. We spent time talking about the cosmos around the film. Then he slowly picked up the pieces here and a piece there that allowed him to enter it.

The character Phoenix personifies has this unfaltering depth yet vulnerability to him. Did find some of that in the script process?

Yes. Joaquin is so smart, so funny. He was teaching me so much about my script. We would act it out together and go through it. It was a different experience than writing alone. It’s embodied. It’s experiential and you learn so much about it from the process.

One of the visual storytelling tools you used was shooting in black and white. Did it have any kind of underlying meaning for you?

You definitely feel that as you’re watching. You’re just immersed in these characters that are in front of you instead of what’s going on in the background. The monochromatic palette pushes that.

Black and white was really important to me because of this idea, this image of a kid holding this hand and walking through life. Walking through a city. Walking through society. It’s like a fable image. I wanted the film to have a kind of fable quality while at the same time having a modern reality with no art direction or sculpting.

Sound quite literally (and subliminally) ends up being almost a character in the film. Did it start out that way?

Not at the very beginning. I knew I wanted Joaquin to interview the kids, and as you go along, you come up with a different piece at a time. Some of your pieces work, and so, they sustain and they keep giving you good stuff and you keep them while some of them don’t. So sound, the activity of listening and the consciousness of sound as part of the story slowly became such an interesting or central part. It kept coming around or kept being relevant to other parts of the story.

It definitely influences how the story unfolds in a good way. Did any of the sound scenes with Johnny or Jesse have any deeper meanings for you while directing?

To me, sound is the thing that really resonates with parenting as so often you’re stuck under your kid who has fallen asleep on you, or you’re stuck in a situation you didn’t plan on being there because of what your kid is doing to your life. It’s actually a gift because you’re more present than you would have been if you were left on your own devices.

So sound so is presence. If you stop and listen to the sounds of your city, like a fire engine in the distance, it’s a way of being really present. You also can’t have sound without time. Time and memory and the morality of everything are, to me, the real deeper heart of the film. Sound also helped me get there I felt like.

With C’mon, C’mon being such a heartfelt film, what are you hoping resonates with audiences?

On one level, it’s people trying to help each other. It’s as simple as that. People trying to be there for each other with own their flaws and limitations, but still like this attempt to help. Another answer is that I really hope there are a whole bunch of takeaways from this film. I feel like so far there are, at least from the people I’ve talked to. I made a film with a lot of space in it where it plays really small and intimate, but also really big, as we interview all these other kids and their voices and go to these different cities. But also big in that I wanted to make room so people can insert themselves into this story and have an ending be open-ended so viewers can take away numerous things – like a bouquet you can take different parts from.

C’mon C’mon is in theaters now.