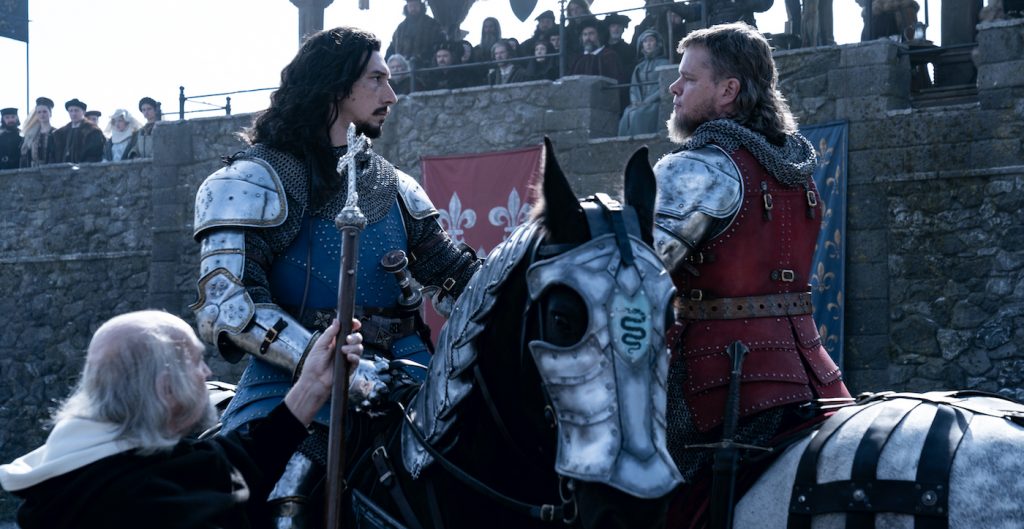 The reviews are pouring in for Ridley Scott’s The Last Duel, a sweeping historical epic that boasts a script from Matt Damon, Ben Affleck, and an ace director herself, Nicole Holofcener. This star-studded period piece has hit its mark, according to the critics, with Scott in his element in his brutal, beguiling story of the brutal endgame of male ego.

The Last Duel is set in 14th century France and centered on the marriage of Marguerite (Jodie Comer) and Jean de Carrouges (Matt Damon) in a time of “codified patriarchy” as the aforementioned screenwriters have explained. What leads to the titular last duel is when Marguerite accuses her husband’s old friend, Jacques Le Gris (Adam Driver) of attacking her, setting into motion the events that will lead to the two men fighting to the death. The outcome of their titular duel includes a potentially horrific fate for Marguerite herself. Intriguingly, the film is structured Rashomon style, meaning we’ll see the event leading up to the duel through each of the three main characters’ perspectives. Furthermore, Holofcener, Damon, and Affleck have given this historical drama a modern twist, critiquing the “preening vanity of men” as critic Caroline Siede writes, whereas you can easily imagine this story being told, a mere few years ago, in a very different way.

So, what are the critics saying? Basically that Scott, who reinvigorated the period drama with his bloody, brilliant 2000 masterpiece Gladiator, is in top form. The Last Duel is being called an ambitious, memorable thrill-ride, one whose promised final battle is jaw-dropping. What’s more, Comer shines as Marguerite, giving the brutal, bloody film its ferocious beating heart. Here’s how The New York Times‘s Manohla Dargis opens her Critic’s Pick review: “It’s no surprise that Ridley Scott, who’s made his share of swaggering manly epics, has directed what may be the big screen’s first medieval feminist revenge saga. In addition to his love for men with mighty swords, Scott has an affinity for tough women, women who are prickly and difficult and thinking, not bodacious cartoons. They’re invariably lovely, of course, but then everything in Ridley Scott’s dream world has an exalted shimmer.”

Onto the reviews. The Last Duel hits theaters on October 15.

From its first minutes, #TheLastDuel establishes itself as extraordinary. 📽️

#TheLastDuel is a brutal, haunting medieval affair about power, egocentrism, hypocrisy, loyalty and truth. Adam Driver and Matt Damon are great, Jodie Comer is amazing, and Ben Affleck steals the show. In my book, Ridley Scott’s best film since The Martian. @TheLastDuelFilm pic.twitter.com/B8QP3CCayv

Rafer Guzman of Newsday writes: “A gripping true story that draws unsettling parallels between past and present.”

Glenn Kenny of RogerEbert.com writes: “It all leads up to the title duel which, even by the high standards set by Scott’s Gladiator, is what you’d call a humdinger.”

Soren Andersen of the Seattle Times writes: “Scott, who knows a thing or two about how to mount sweeping historical epics, is in his element here.”

Leah Greenblatt of Entertainment Weekly writes: “Scott manages to fill in the finer brushstrokes of all those characters and still fit the kind of bravura action set pieces he’s known for; the fight scenes are breathlessly, bone-crunchingly brutal.”