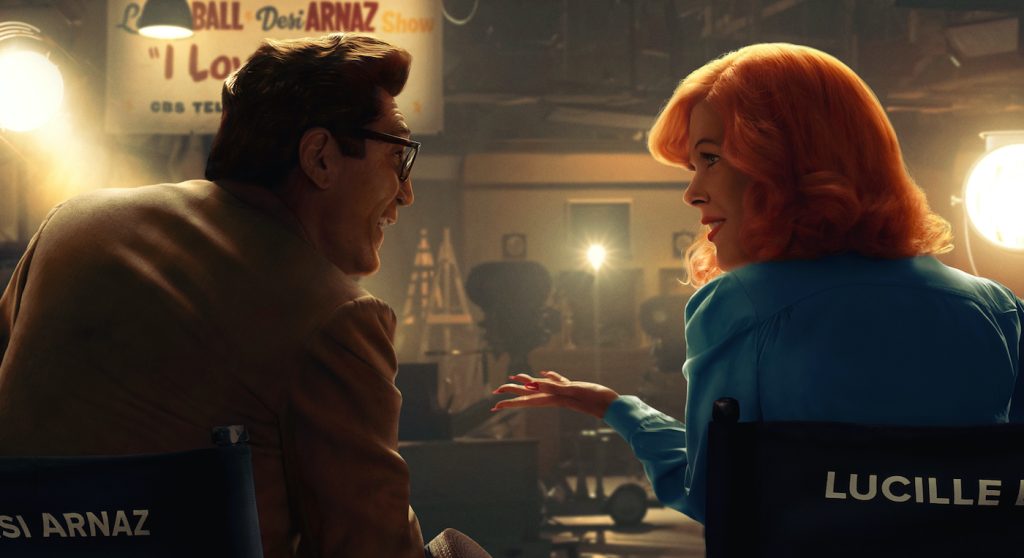 We’ve got our first look at Nicole Kidman and Javier Bardem as the legendary Hollywood power couple Lucille Ball and Desi Arnaz in Aaron Sorkin’s Being the Ricardos. The brand new trailer, released by Amazon, reveals Kidman gamely taking on one of the most legendary performers in Hollywood history. Bardem is no slouch as Lucille’s husband and co-star, and Sorkin’s film will follow the two of them during a week of production of their groundbreaking, massively popular show I Love Lucy.

Sorkin is no stranger to taking us behind-the-scenes of a television production and mining it for comedic and dramatic gold. His shows Studio 60 on the Sunset Strip and The Newsroom were both set on set, on a Saturday Night Live-like sketch show in the former, and on a CNN-like news program in the latter. In Being the Ricardos, Sorkin has set his sights on one of the most transformative talents of the 20th century in Lucille Ball, and his rapid-fire, walking-and-talking approach to both dialogue and scene-setting seems a perfect fit for the legendary comedienne. Being the Ricardos will take us from a Monday table read through the live show on Friday, while our two married stars will face a cascading series of challenges that will threaten their marriage and their careers.

Here’s what Kidman had to say about the film to Chris Rock in Variety‘s Actors on Actors conversation: “The strange thing about Lucille Ball is that everyone thinks we’re remaking the ‘I Love Lucy’ show, and it’s so not that. It’s about Lucy and Desi and their relationship and their marriage. It’s very deep, actually.”

Joining Kidman and Bardem in the cast are J.K. Simmons, Jake Lacy, Nina Arianda, Alia Shawkat, Linda Lavin, Clark Gregg, and Tony Hale. Being the Ricardos will open in theaters on December 10, and then onto Amazon Prime Video on December 21.

Here’s the official synopsis from Amazon:

You know Lucy and Ricky. Now it’s time to meet Lucille and Desi. Here’s a special teaser from Being the Ricardos, in theaters December 10 and on Prime Video December 21.

Lucille Ball (Nicole Kidman) and Desi Arnaz (Javier Bardem) are threatened by shocking personal accusations, a political smear and cultural taboos in Academy Award®-winning writer and director Aaron Sorkin’s behind-the-scenes drama Being the Ricardos. A revealing glimpse of the couple’s complex romantic and professional relationship, the film takes audiences into the writers’ room, onto the soundstage and behind closed doors with Ball and Arnaz during one critical production week of their groundbreaking sitcom “I Love Lucy.”

TAGSAmazon Studios Being The Ricardos