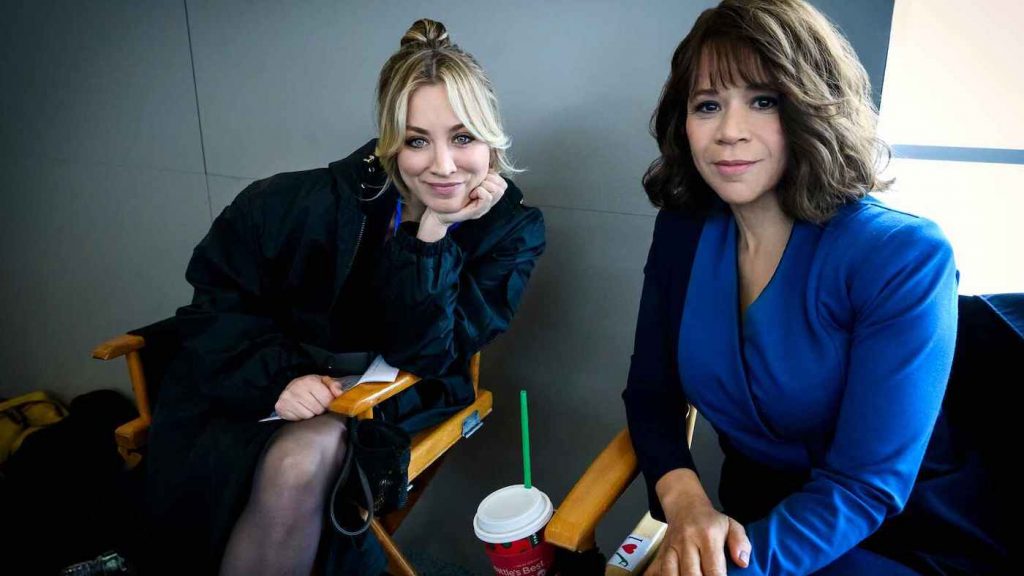 The Flight Attendant casting directors John Papsidera, Beth Bowling, and Kim Miscia had to book HBO Max’s hit series long before HBO Max was even a known quantity. Yet these veterans managed to fill The Flight Attendant‘s planeload of superb performers and earned an Emmy nomination for their efforts.

The Flight Attendant‘s cast delivers on the thrills, chills, laughs, and spills—the latter mostly via the drunken shenanigans of Kaley Cuoco’s Cassie Bowden. While Cuoco’s performance has been deservedly praised (she also nabbed an Emmy nomination) as the reckless titular flight attendant with a bevy of personal and professional problems, the series maintains its cruising altitude thanks to a group of actors who rise to the challenge of Cuoco’s performance.

We spoke with Papsidera, Bowling, and Miscia about how they found the right actors for the right roles, and the many hats a casting director must wear, not least of which is that of therapist to the performers who put their hearts and souls into auditions for roles they don’t always get.

What were the early days of casting this series like?

John: What was a benefit was Kaley didn’t only produce it, but she developed the material from the novel. So really from the beginning, they got the tone right. I think that was the big difference-maker in it. Yes, we’re all astounded by Kaley’s transformation in this right and finally being in the limelight to show a lot of different skill sets she has. It’s perfectly suited for her, there’s a bit of drama, a bit of comedy, a bit of slapstick, and a bit of emotion. If you know her, it’s very close—other than the drunkenness—to her own persona. It’s so well suited for her, and I think that was part of the excitement, going on that journey with her. That tone between mystery and intrigue, comedy and drama. That’s the tightrope we all walked.

From a practical standpoint, how did you three divide and conquer your jobs?

Kim: John cast the pilot, and then for season one, Beth and I took over. It was a really seamless transition, John was very helpful, collegial, and gracious with sharing everything with us. Kaley was just so great. I always say leadership culture starts from the top, and Kaley was so respectful and just knows the business. It was so much fun to come in every day for work. Kaley’s reputation proceeds here. And in New York, it was an embarrassment of riches. Once we landed on what the creative team’s vision for the roles was, we were able to cast for the role.

John: I think that’s one difficulty people don’t realize with casting—you’re juggling a lot of opinions, a lot of different points of view, with the reality of the situation. What you can afford, the budget, the medium, all those things have to go into a big mixer that we have to turn into bread somehow. The reality is there’s so many different aspects. Deal making, creativity, matching what’s in a director or producer’s head to an actual person, and getting everyone through that process. It’s always a challenge, some more than others, but this one really gelled. The mission was to find the best people we could who understood comedy and drama, and, to cast a little against the grain than what you’d normally expect.

Who in the cast would you say was cast against the grain?

Beth: I think the genre-bending of the show is what makes it so unique, you really can’t compare it to another show. In regards to casting, John was responsible for Rosie Perez, and I think that was such a brilliant piece of casting. I think most people think of her as a stereotype sassy tough New Yorker with a lot of bite. Her character Megan was a little more controlled, a little more refined, yes, she had zingers, but the viewing public got to see a different side to Rosie. Then Nolan Gerard Funk playing the douchey FBI guy, you kind of hate but you kind of like him, and he brought comedic elements to the role. And then Zosia [Mamet] has Cassie’s best friend, she just did such a great job she played this thing where her character had a little bit of sinister business as a lawyer, and she held onto her cards really tightly, but her relationship with Cassie was so important to her character that you got to see a warmth to her she didn’t let people see in everyday life.

John: What’s interesting is everybody gets to play kind of a fringe of themselves. Nobody is just straight exposition. No matter which character, you get to venture into a gray area of their personalities, and shades of gray are great to play for actors.

How do you navigate all the different people who have a say in casting?

John: It’s a lot of convincing. For me, I try to be the voice of reason. It’s shocking no matter how small or large the group is, and in TV, it tends to be a larger group between executives and showrunners and creatives, and that’s only half of them. In our job, it’s also agents and managers and actors, talking to them creatively as an artist would to give them insight into a role, yet the next phone call you’re talking numbers and business and quotes and what people will and won’t do, and what kind of billing they deserve. It’s wearing a lot of hats, trying to find common ground, and convince people of that common ground. I think what we did collectively was try to have a singular version, and that doesn’t mean there weren’t camps, there are in every project, but sometimes reason prevails and creativity aligns with that. It’s through a lot of hard work, it’s not magic.

Kim: There’s a lot of trying to convince people, and also keep an open mind. You’ll end up casting someone you saw at the beginning of the process, but the creative team needs the context in order to get there.

Beth: I think overall, it really is like being a diplomat. You’re dealing with your creatives, with the studio or network, who might not have the same vision as the creative team. Even though they bought the project that the creative team wrote, pitched, and sold to them, so it’s being a moderator sometimes, getting everybody on the same page. You may have a vulnerable one second, talking budgets the next second. It’s a constant tap dance.

And it’s also your job to break the bad news to actors when they’re not cast.

Kim: Yes. We break it really gently, don’t we John?

John: We’re all very sensitive to the experience they go through. The heartbreak, and the courage it takes to put your soul on the line every day, it’s tough. It’s not just punching a clock, it’s eviscerating your soul again and again and again, so I think we all try to be sensitive to that. But at the end of the day, one person gets the job and a lot of other people don’t, and it’s tough. It’s not an enviable position to have to tell people you’re stepping on their dreams.

Kim: It’s kind of the worst part of the job. It really is.

John: You’re also telling an agent and manager they’re not making any money. Our job comes with dealing with fear a lot. I feel like most of my day is handling other peoples’ fear, and that takes diplomacy and a soft touch. If you care, I’m sure there are some people who deal with it with a heart of stone, but I don’t try to do that myself.

I guess you can add therapist to one of the hats you wear.

Beth: There are so many variables on why an actor doesn’t get cast, and it’s often not that they weren’t amazing, there are other factors that have nothing to do with their performance, so you have to articulate that so they don’t take it upon their own self-worth. Sometimes it’s not about the best performance, but all these other layers of things. It’s like when you’re decorating your house and move a chair and realize the painting above it no longer works.